Cement production is believed to be the cause of as much as 5% of global CO2 emissions. By comparison, the commercial aviation sector contributes to about 3%.

While one of the reasons for this can be found in the materials that constitute cement – one of the main “ingredients” of concrete – the principal factor must be the gargantuan quantities of cement that humankind produces and uses every year.

“The most important man-made material”

Historian Vaclav Smil called cement the most important material in our civilisation, both in terms of the amount we produce each year and the total mass we have laid down over the course of history. “Concrete is the foundation (literally) for the massive expansion of urban areas of the past several decades, which has been a big factor in cutting the rate of extreme poverty in half since 1990. In 1950, the world made roughly as much steel as cement (a key ingredient in concrete); by 2010, steel production had grown by a factor of 8, but cement had gone up by a factor of 25

Developing countries, regions on the road to becoming world powers, and the current super-powers themselves all have a lot to do with this multiplication factor. In the last three years China has used more cement than the U.S. used in the entire 20th century.

One way of reducing the amount of cement produced is by increasing its strength, durability, and resilience to external agents such as water and pollution.

According to a study carried out by University of Exeter, one method of doubling the resilience of cement is by adding graphene nanoplatelets. Graphene consists of a thin layer of atoms of graphite. It is a light, resistant material that conducts electricity a hundred times better than copper and, in addition, is manufactured from elements that are found in abundance. 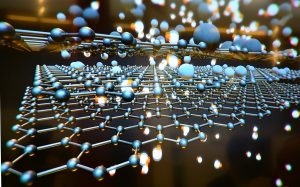 When applied to cement, the result is a new composite material that is twice as strong as conventional cement and four times as resistant to water. According to researchers, all the samples tested have complied with European construction legislation.

Almost half the CO2 emissions

Thanks to these properties it is possible to reduce, by about 50%, the amount of materials required to produce cement, meaning a reduction in CO2 emissions of some 446 kg for every ton of cement produced. As professor Monica Craciun states, “Graphene-reinforced cement is an important step on the road towards making the construction industry more sustainable and respectful of the environment.”