From the Orient Express to AVE—What Would Poirot Say About the Train Service of Today?

The restaurant cars of previous centuries have evolved enormously in their journey through advancements in the technology of train travel, paralleling the abrupt shifts in travel time and competing with air travel. Yet, in the midst of a railway rebirth, one must ask themselves if the on-board dining still holds a relevant position in modern methods of travel—What would Poirot have to say about the services provided on an AVE?

There are several factors we need to take into consideration before evaluating such a question. After all, many of the variables that might have morphed over time simply cannot be compared due to their irrelevance. For example, one could admire the quality of the sleeping cabins that were available to Poirot on the Orient Express or any traveler of the golden age of train travel, but what sense would that make when the speed of an Ave train enables the passenger to arrive at their destination without needing to spend the night. Another irrelevant comparison would be that of the separate restaurant car, which has ceased to exist on most modern trains. And why you may ask…the simple answer is that modern designs have allowed you to be served at you seat without needing to be seated at a separate table, thus making the onboard dining experience more convenient for the passenger. Finally, we should talk about the ticket class—As is consistent with his character, Poirot wouldn’t settle for anything less that first class, and even though the train is fully booked and can only acquire a second-class berth with the help of a fellow Belgium, he is bumped up to a first-class cabin on the second evening of the journey. So, for the purposes of this examination, we will be comparing the quality of the two first-class experiences. And let’s face it, who doesn’t enjoy reading about opulence of the rich and famous!

To understand what Poirot would’ve experience, we must journey to the early 20th century. Murder on the Orient Express was published in 1934 and some speculate that it was loosely based on events from previous years, including the kidnapping and murder of Charles Lindbergh’s son in 1932 and Agatha Christies on journey on board the Orient Express in 1928. This period is considered by many to be the golden age of travel and it is precisely this period which we are aiming to compare with the train travel of today.

The food was most certainly spectacular on any given train during this era, and we have good amount of evidence that can affirm this statement. Really, this is when rail dining began to find its stride. Previously in train travel, depending on the part of the world, the had suffered from the lack of an on-board kitchen, thus forcing passenger to pack their own food for the trip or resort to inferior road house meals at designated stops along the way. The birth of Pullman “Hotel Cars” changed this standard with their compact kitchens that brought freshly cooked food to the railway dining experience. When George Nagelmackers, founder of the Wagons-Lits company, travelled to the US and experienced a Pullman train he was inspired to bring the concept to Europe, and so was created the Orient Express. 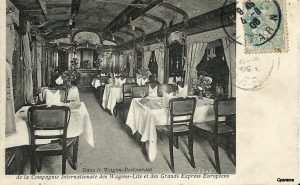 A vintage postcard showing the Dining car of the Orient Express, 1910 c.ca One of the rare public pictures.

In a chronical of the train’s inauguration, Henri Opper de Blowitz described the lavishness of the restaurant car in eloquent detail:

The bright-white tablecloths and napkins, artistically and coquettishly folded by the sommeliers, the glittering glasses, the ruby red and topaz white wine, the crystal-clear water decanters and the silver capsules of the champagne bottles—they blind the eyes of the public both inside and outside.

Though the year of the description marked here is not exactly that of our supposed comparison, we can imagine that the extravagance of the restaurant car would have only improved in its ascendance to the golden age of the 20s and 30s.

Regarding the food itself, de Blowitz praised its superior quality in awe of the challenges presents by space and resources.  The Belgian guest reflected on his thrilling culinary experience that persisted throughout the journey:

…during the entire trip from Paris to Bucharest the menus vie with each other in variety and sophistication—even if they are prepared in the microscopic galley at one end of the dining car.

To take a closer look at what Poirot’s experience would have been like, we will consider this lunch menu seen below from June 2nd of 1925 consisting of Sole Meunière fillets, Chicken Mascotte, Green beans, Ham and Roast Beef, Romaine salad, Cream of Lutetia, and Dessert. This menu is only 3 years off from the speculated year of the mustachioed detective’s fictional journey.

Comparing this menu to those featured on AVE train services, we’ll use a lunch menu that was served to passengers on an Ave train from Sevilla to Madrid. The menu seen below featured a consommé or gazpacho, a chickpea and vegetable salad, and tender pork cheek with gravy and pesto gnocchi as the main.  A selection of bread and drinks were included as well as cheese for desert. 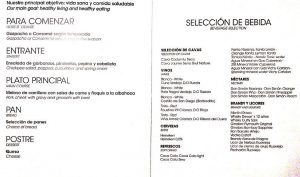 The menus on AVE trains, designed by Michelin-Star Chefs Sergio and Javier Torres, were thought with the passengers in mind, including healthy food and 10 special menus adapted to the dietary needs of the passenger. Depending on the time table of the journey, there are variety of dishes that might be served, such as breakfast, lunch, dinner, appetizers, and afternoon snack. The food also varies according to the region of the route. Respecting the variety of the Spanish landscape, they are likely to serve meat and fish in the “wet and rainy” north, to serve fruits and vegetables along the Mediterranean coast, legumes on the Castilian plateau, and many products from Andalusia.

Beyond the restaurant service that is provide aboard Aves trains, there are plenty of niceties that take the passenger experience on an Ave service to a higher level. For instance, boarding welcome and farewells from the crew, accompanying of minors, headset provision, and public address system. The sum of all these factors brings a particular charm to the AVE train experience that is unrivaled in comparable modern services.

And so, we must return to our conclusion, if it is that we have reached one. What would Poirot have to say about modern train service? It is true that there have been many sacrifices in the areas of luxury but at the benefit of more affordable pricing, mind you. However, I still believe that Poirot would be impressed and quite pleased with an AVE train experience. Perhaps the murder on the Orient Express would have never happened in the first place considering how little time the journey takes, in which case Poirot would say

What a relief! I’ve finally enjoyed a relaxing train ride without having to solve a mystery.