True information, a luxury in the 21st century

Well into the 21st century, the notion of fake news is one most current topics in media. The following report shares a broad view of the most relevant instances that have occurred both nationally and internationally, how to point them out, and the best tools to fight against misinformation.

Just a few days ago, Washington, D.C. residents woke up to the news that Trump had left the presidency. The information was – supposedly – published by the Washington Post. But it was a trick: it was a fake edition of the newspaper. This is one of the many examples that are already indicating that 2019 will become the year of fake news. They started as a joke around the time of Trump’s nomination in 2016 – who is himself a big proponent of the term – and they’ve spread like wildfire during the last 3 years. It was the word of the year in 2017, and it’s more relevant than ever: all the reports confirm it. And the data is alarming: according to the Freedom House organization, at least 30 governments paid opinion shapers to distribute online propaganda in favor of their interests in 2018, and it’s predicted that in 2022, 50% of news will be fake.

Some 70% of the population of Spain is worried about disinformation online, a statistic that’s even higher in Brazil (85%) and next by the United States (64%), compared to 55% of the media worldwide. And fake news on the internet is 70% more likely to be retweeted and spreads 6 times faster than news. People that are over 65 years old are more likely to share fake news on Facebook than younger people. And 21st century society doesn’t just inform itself through traditional media: in the United States, social media has already surpassed print media as a source of information. And it’s those same social networks that are the loudspeakers for fake news, a global phenomenon that’s come to stay.

In spite of this climate of disinformation, journalist Marta García Aller assures that it will be fake news itself that saves journalism: “We were used to information being free online, without thinking about what was free was also disinformation. Journalism can be transformed in that filter that helps us differentiate what’s true from what’s false.”

What is fake news, and where does it come from?

Fake news is false information that is spread for a certain purpose. It has two characteristics: having a clear objective and taking on a real appearance. There is fake news that uses the format of a traditional newspaper article, or it can take on audiovisual formats, with photos or video that is retouched or that occurred at a different time or place than the information indicates. The motives for spreading this type of information tend to be political, ideological, or financial, as journalist Marc Amorós explains. Creators of this type of false information can include anyone from freelance journalists to consulting firms, even those known as clickbait or Russian news factories.

“It’s about fake news pretending to be an article in a respected means of communication to make it seem reliable and get users to take the bait,” explains Álex Romero, Founder and Managing Director of the consulting firm Alto Data Analytics.

And until now, distributing untrue information had a very limited field of play. If you wanted to get your message out there, the cost was very high. The barriers to entry in the communications sector were high. However, technology has broken those barriers, and the explosion of the internet and social networks – Facebook, Twitter, and WhatsApp – has changed the rules of the game. The possibility of spreading messages is growing exponentially. Whether it’s through messages on social media or through the free creation of a web platform.

The typology of fake news considers various categories of information: on the one hand, there are those considered to be political, information sponsored by a political party to support a certain candidate or legislative initiative. Here, the goal isn’t economic but influence. Recent cases have come up during the independence referendum in Catalonia and during Brexit in England. Then there are those that are economic, whose aim is to stir up content which basic goal is directing traffic to a specific web platform to then monetize that space through ads. Or those created in response to crises: when a catastrophe or an attack occurs… is when the most fake news happens. Journalism, the official sources, haven’t had time to compare information, and fake news engines take advantage of the demand generated by the chaos.

The problem isn’t technological but behavioral

Fake news spread faster and in a deeper and wider way than the real news across all types of information, according to a study by MIT. Likewise, the effects are more relevant to news of a political nature than in other fields, such as natural disasters, terrorism, science, or financial information. The response to this trend lies in psychology: we like novelty, and fake news is more novel and attractive than real information. People respond to fake news with surprise or disgust, as opposed to the more neutral behavior we adopt in relation to real information. 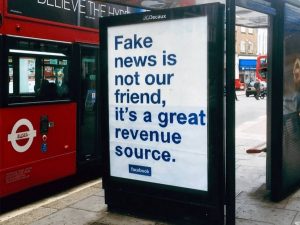 Likewise, we tend to believe that news that is in line with our ways of thinking is true and that which isn’t is false. “You read the headline, and if you like it and think it’s right in some way, you share it, most of the time without going to the source or even having read the content that goes with that headline,” points out Amorós. In this sense, the fight isn’t just technological – trying to stop and reduce the number of bots (coded programs that distribute information automatically through social media) – but instead it’s about behavior. According to MIT, the distribution of fake news isn’t primarily due to the bots but to the fact that users share and retweet this sort of information.

Fake news is the antithesis of journalism, which in turn is the most valuable tool for fighting it. Some of the news has caused significant confusion in society, feeding feelings and opinions founded on false testimonies.

A truly famous case was the Cambridge Analytica data leak. The business was accused of manipulating data of over 50 million Facebook users to create influence with personalized messages during Donald Trump’s election campaign. It allowed thousands of messages sent to different voters’ profiles on social media like Facebook or Snapchat to be generated. On this note, Kathleen Hall Jaimeson, from the University of Pennsylvania, released the strategy supposedly used to manipulate the North American population. Another case that was widespread was the fake news that claimed that cellphones had a microphone under the battery for spying on users, when most smartphones actually have an NFC chip located there.

How can we spot fake news?

Fake news is a phenomenon that is woven into our day to day lives. We see news that is fake, rumors that spread at the speed of light, and when you try to debunk them, sometimes it’s already too late. Therefore, several initiatives have been started to combat these rumors that bring the truthfulness of the news we consume into question every day:

The platforms that exist vary. Institutions are also attempting to fight this boom: looking ahead to the 2019 elections, the European Commission recently announced that it will start a safe digital platform where member countries can share information on disinformation campaigns and coordinate responses.

Fake news essentially affects the political world directly these days, but it’s also affecting and will continue to affect the business world even more. Fake news can alter stock prices for a company or impact the operational costs of mergers and acquisitions. To prevent rumors, financial analysts and specialized modes of communication have to strengthen their work on comparing information from different sources. From a communications point of view, the spokesperson for the company has an important role for being able to confirm, assess, or dismiss rumors.

Sebastián Cebrián, General Director for the Asociación de Directivos de Comunicación, puts it like this: “in a world that is interconnected, technological, and where civil society, employees, businesses, and institutions build up and tear down their reputations, a massive amount of various content is produced, and a lot of it is fake, distorted, manipulated, or responds to spurious ends. Therefore, fake news can only be fought by recognizing the source’s credibility, advocating for transparency, and never giving up on the truth. Only the media, businesses, and influencers that meet these requirements will win the battle for credibility and be chosen to keep us informed.”

Once again, technological innovation sounds the alarm for communications professionals. A critical frame of mind is necessary now more than ever, and it has become imperative to apply the first law of journalism to society: compare sources. Even though this is just the start of fake news, which will evolve as time and technology allows it to, we have to trust training and education, the foundational pillars that will make us think before we tweet. There will be twists and turns along the way, but we’ll be ready.