Do you bike to work? Try it out!

As different modes of transportation have cropped up in young cities, more and more citizens have opted for jobs far from their homes. This means that they can’t get to work by biking or walking, and they have to use public transportation or private vehicles.

Even so, a large part of the population can still bike to their workplace if they wanted to. Why don’t we do it, despite the enormous advantages it offers? In this article, we’ll look at the average commute times to get to work, the health costs of driving, and the advantages of biking (for our health and our wallet), as well as how to think about the mobility of the future.

How long does it take us to get to work?

Have you ever calculated how many hours you spend in your car or public transit to get to work? Ten minutes? Half an hour? More than an hour? It even takes some people two hours to get there, to then have to return.

One study done in 2015 by PageGroup showed how we Europeans get to work. After asking 12,000 professionals about their commute, the statistics show the differences between countries. 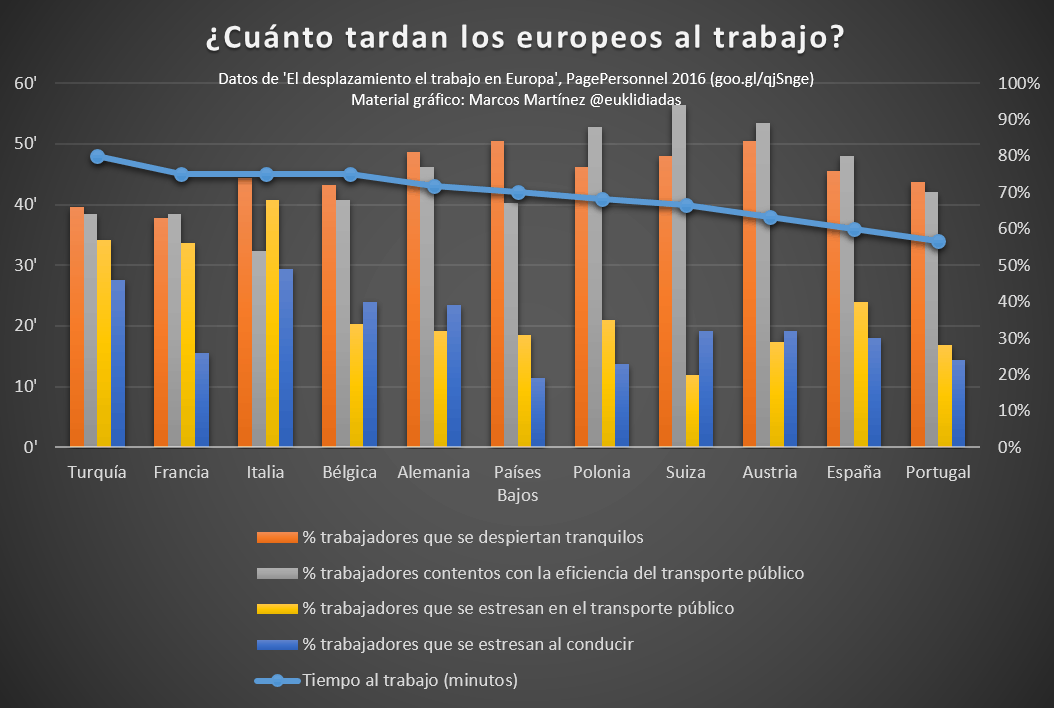 In the graph above, which shows data from the study, we can see that those who take the longest to get to work are the Turks, but that doesn’t faze them. Those who are most stressed about waking up to get to work on time are the Dutch and the Austrians, and those who are happiest with the efficiency of public transit are the Swiss. Even though the European average is 42 minutes, it takes more than 45 minutes both ways for 39% of workers.

In 2008, the study ‘¿Cuánto cuesta ir al trabajo?’ (‘How much does it cost to get to work?’), by María Gutiérrez-Domènech, found that Spaniards spent an average of 57 minutes every day getting to work and back. This fact is important given that 2017-2018 and 2008 have certain parallels in terms of transportation. The crisis considerably reduced its use, but a decade later, similar numbers of trips have been reached, along with similar levels of traffic jams.

Do we get there faster because we’re biking, or do we go by bike because it’s nearby?

If we’re looking at how many of these trips are made by bicycle, we find a huge variance. For example, only 3% of workers in the United Kingdom get to work by bike, compared to 43% of Dutch employees and 30% of Danish employees who pedal to work every day, according to the Eurobarometer. Some 4% of Spaniards pedal to work and back regularly.

It would seem that we’re bringing up the rear, but future generations are bringing back the bike. According to the ‘Estudio sobre movilidad “millennial” en el futuro’ (‘Study on millennial mobility in the future’) by DUCIT (the Observatorio Español de Conductores), 70% of millennials think that bicycles will be used as transportation more in the future. 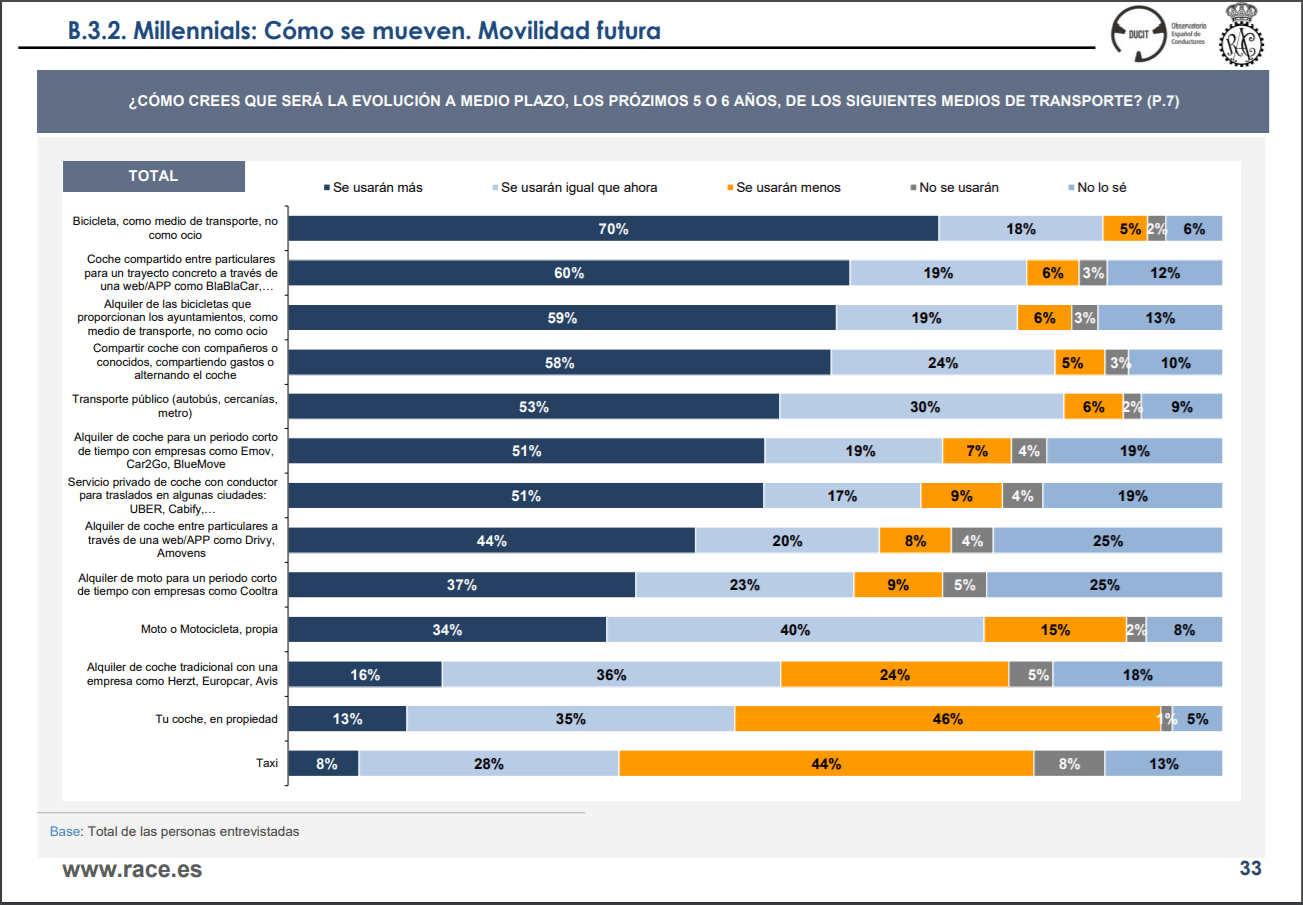 It makes sense. According to a press release from Niels in 2014, 88% of workers who get to work by bike take less than 10 minutes to get there, compared to only 34% of drivers who get there in the same amount of time. Do we get there faster because we’re biking, or do we bike because it’s nearby?

Both, probably. As distance to work increases, the number of bike trips, which usually goes up to 20 km, drops considerably. On top of that, biking in the city tends to result in fewer accidents than driving, especially in heavy traffic.

Many cities around the world have learned that installing bike lanes encourages people to use this mode of urban transportation, which lowers pollution, driver stress, and even the time it takes to get to work. 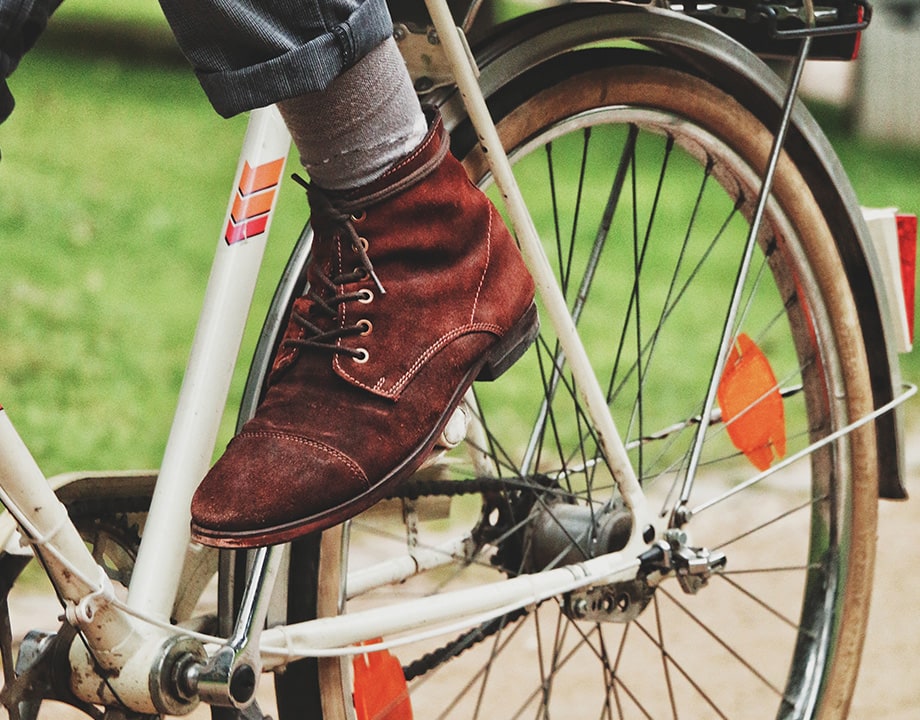 Other countries, like France, have contributed to businesses and created programs to encourage biking, like Bike-to-work. With this program, there is a €0.25 credit for each kilometer to and from work. The idea was a hit. In five months, bicycle use doubled, but why would the government pay for its citizens to bike?

The key is in expanding our focus and looking at health budgets. Even with a downward trend in smoking, pulmonary illnesses are still on the rise, alongside concentrations of particles in the atmosphere. These illnesses tend to be chronic and costly to treat. A credit of a few cents per kilometer results in a healthier population, and it is small change in comparison.

We pay for the comfort of our cars with our health

For a while, we’ve known that driving, especially at rush hour, ends up being a stressful activity for most drivers. There are numerous psychological studies that show this, and yet, many of us insist on getting to work in our own vehicle. Why? 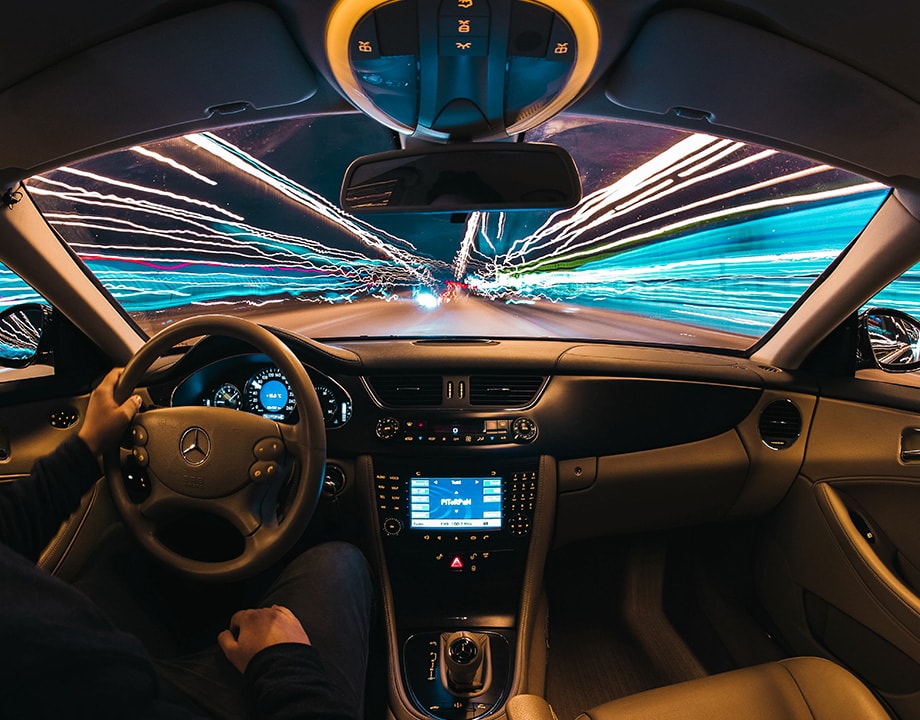 A 2004 study in  New York showed that getting to work was one of the least satisfactory daily activities that created feelings of impatience or fatigue. On the microscopic level, it also showed that it increased blood pressure, resulted in musculoskeletal problems, lowered tolerance for frustration, and increased levels of anxiety and hostility.

Another study, this time in the United Kingdom in 2014, linked the ability to concentrate and personal happiness directly with using public transportation, walking or biking to work, compared to the problems associated with driving: boredom, social isolation, and different types of stress.

A third study linked driving to work with cardiorespiratory problems. These studies aren’t exceptions or anomalies. Almost all of them come to the same conclusion by studying different factors: driving is a form of sedentarism that we should avoid as much as possible. It has a serious implication for our health.

The myth of rain: I don’t bike because I’ll get wet

But it’s very comfortable riding in a cushioned seat and getting to work while listening to our favorite radio station, in addition to being able to drive door-to-door and avoiding inclement weather is much as possible.

This is true if we do a day-to-day analysis (especially if it’s raining) because we notice that it’s more comfortable to drive. However, when we look at it over a few years along with our future health, the obvious choice is biking. The Danish and Dutch know this, as citizens of countries that generally don’t have good weather, and they still bike much more than us. 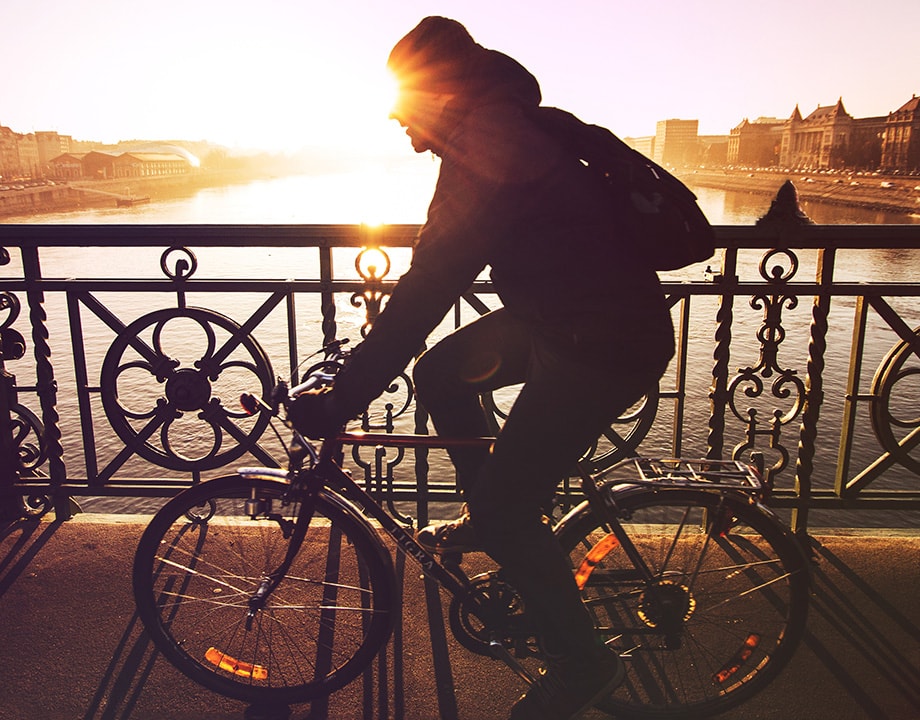 Sweat is another myth. How can I go to the office all sweaty? As cyclists know, most of us feel hot flashes when we’re done pedaling. That’s normal, we’ve just used a lot of energy and lose a lot of heat through our skin, so we need time to dry off. That can be managed by peddling slower for the last few minutes and even walking the last 500 meters.

It also helps to add saddlebags or baskets to carry a briefcase or backpack much more comfortably, to wear breathable clothes (which we can then change at the office), and to choose the route with the fewest altitude changes.

Whether it’s for our health or our wallets, there are many self-interested reasons to bike to work. And there’s even the possibility that we almost never consider: looking for a job near home just to be able to get there by bike. It’s true that that’s not easy, but if we can do it, we’ll manage to save the continual cost of driving or the bus pass, and we’ll get health and quality of life in return.