The Characters of Game of Thrones Travel More Than 200,000 Km on Its Roads

Game of Thrones has been a television phenomenon over the last few years. It’s been a while since the cinematographic universe born from George R. R. Martin’s books diverged from his novels, but both plots have triumphed in their respective mediums. From the perspective of architecture and infrastructure, we ask ourselves if the realism of the buildings or the trips they make (in the first few seasons, that is) may have had something to do with this.

Are the buildings in Game of Thrones possible? Do its palaces actually exist? Why are the roads used more in the first few seasons? Do the scenes take inclement weather into account? Which character has traveled most around this world? In all, the characters in the series have traveled over 125,000 miles (about 200,000 kilometers), especially in the seventh season. This is how the season uses architecture and infrastructure.

The importance of architecture in Game of Thrones

The Lord of the Rings, Dragonlance Chronicles, Discworld, Earthsea, A Song of Ice and Fire… All of these epic fantasy sagas have the common denominator of having created entire worlds in their pages, but none of them started from scratch. Even though they had the help of fictional magic, all of these worlds were designed with some constructional logic—–including transportation infrastructure.

On the maps below, a satellite map and a road map, we can see that there is consistency in the path that roads take through different geographical formations. They connect the main cities, go around mountain chains, run alongside rivers, and stop when they get to deserts. It’s not very different from what actually happens in our world. However, as we will see further on, the series has taken some creative license. 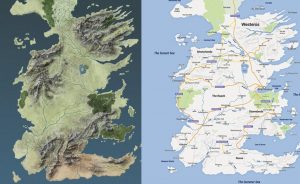 In terms of the structure of cities, all of these novels are set in a historical period similar to the Dark Ages of Europe. Self-sufficient cities and feudal kingdoms were in power, and they often used medieval layouts for their cities: a central building such as an elevated palace, a wall, and low dwellings on both sides of it. So this pattern is repeated in Winterfell, Volantis, and King’s Landing, among other places in the series.

The political tensions in this imaginary world aren’t very different from those that Europe experienced a few centuries ago, and that’s why it’s unthinkable for the design of large cities not to have walls, or cities with low palaces and large windows. Thick walls and narrow windows don’t only correspond to the lack of building techniques that would allow light to enter, but they also prevent enemy attacks from being effective. Arrows break through glass easier than stone. 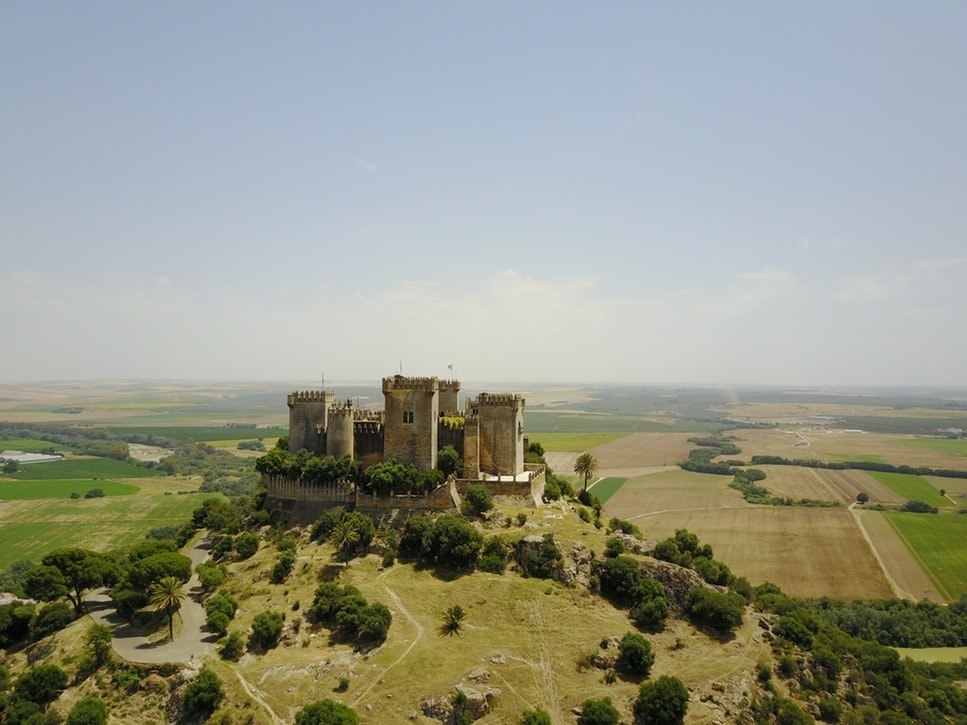 It’s the same reason why there are turrets to see the enemy (Tower of Joy), machicolations to throw rocks at them if they try to scale the walls (Highgarden, above), and moats to drown them (Sweetwater). If architecture, methods of building, and transportation infrastructure were important in the society that the series partially imitates, why wouldn’t they be represented in the story of Game of Thrones?

Roads as an Element of Development

In Game of Thrones, roadway infrastructure plays a key role in the first six seasons. All of the characters spend entire days walking, and it takes them whole seasons to get from one place to another. These seasons are rather realistic, and in an infographic published by Wiki of Thrones, they show how Theon ends up walking distances greater than 32,800 km, and Daenerys is close behind. That’s a lot of kilometers.

The most curious part is that, even though the first seasons show few kilometers traveled, that is when they walk the most on trails and road. That’s a very intelligent move on the part of the scriptwriters, since they use the long roadway infrastructure to develop the characters. Once they are mature (in the seventh season) they “teleport” messenger ravens and people.

In a very interesting analysis by La Vanguardia, they come to the conclusion that Game of Thrones would need five seasons with ten episodes each for the characters to be able to walk the distances they travel, in accordance with previous seasons.

How HBO adapts architecture to climate

Of course, there are many settings in Game of Thrones, and, just as with the length of the roads, not all of them align with inclement climates logically. However, we can see some details in R. R. Martin’s series, such as the thick walls of Winterfell, perfect for increasing the thermal mass of the buildings, especially during the long winter. The Starks’ fort exists partially in Ireland, where Ward Castle protected against the cold in the 18th century.

We can also see how Pike Castle in the Iron Islands makes use of rope catwalks instead of rigid metal elements, which makes sense if we’re looking for ways to connect towers that undergo significant displacement due to wind in the area. And if we go down to sea level for that same setting, we’ll find dwellings isolated from the humidity with straw roofs, and a sizeable port with the sophistication appropriate for the town’s activity (now fishing), like the Atlantic fishing villages used around 1000 A.D. 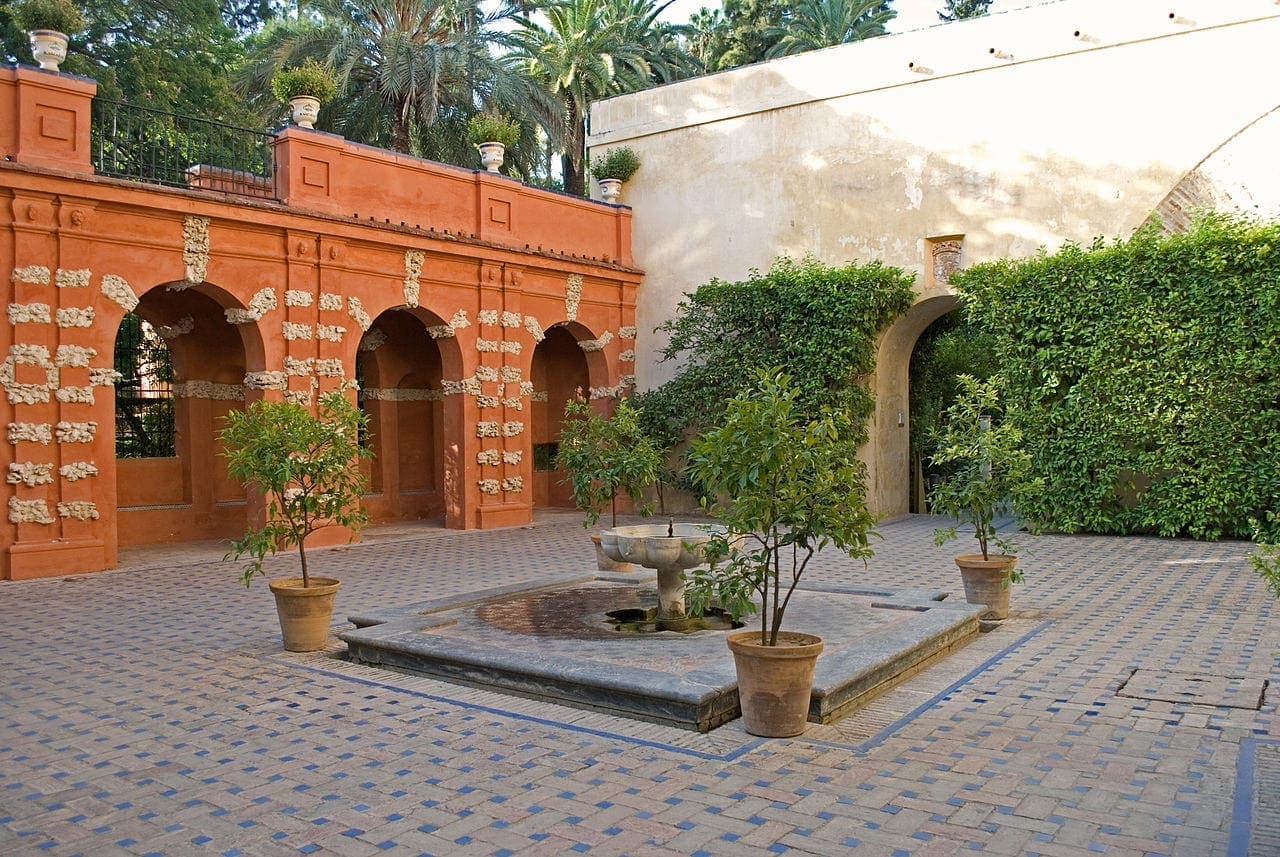 Far from the cold, we can find Dorne, a rocky zone with a warm climate. If we get closer to the scenes where the Palace of Dorne is shown, we can see that it is actual the Real Alcázar of Seville (above). Its architecture, Islamic, Mudejar, and Gothic in style, aims to do the opposite of the walls in the north: to release heat and cool the air, making use of interior courtyards with vegetation and water.

How they get from one place to another depends largely on the infrastructure we’ve been talking about. The Iron Islands are inaccessible without a boat, while Dorne requires some endurance for its rocky, arid roads. The roads that cross the center of the continent, going from King’s Landing to Moat Cailin, are more comfortable and feature long, paved stretches, even though the weather takes a toll when you get to Winterfell.

Something similar is seen in the Yunkai climate, the Yellow City on the eastern coast of Slaver’s Bay. Even though much of it is designed by computer, many of the buildings that appear at the base of the ziggurats are real and belong to Aït Benhaddou in Morocco (below), a type of construction that aims to reflect heat and cool the streets. 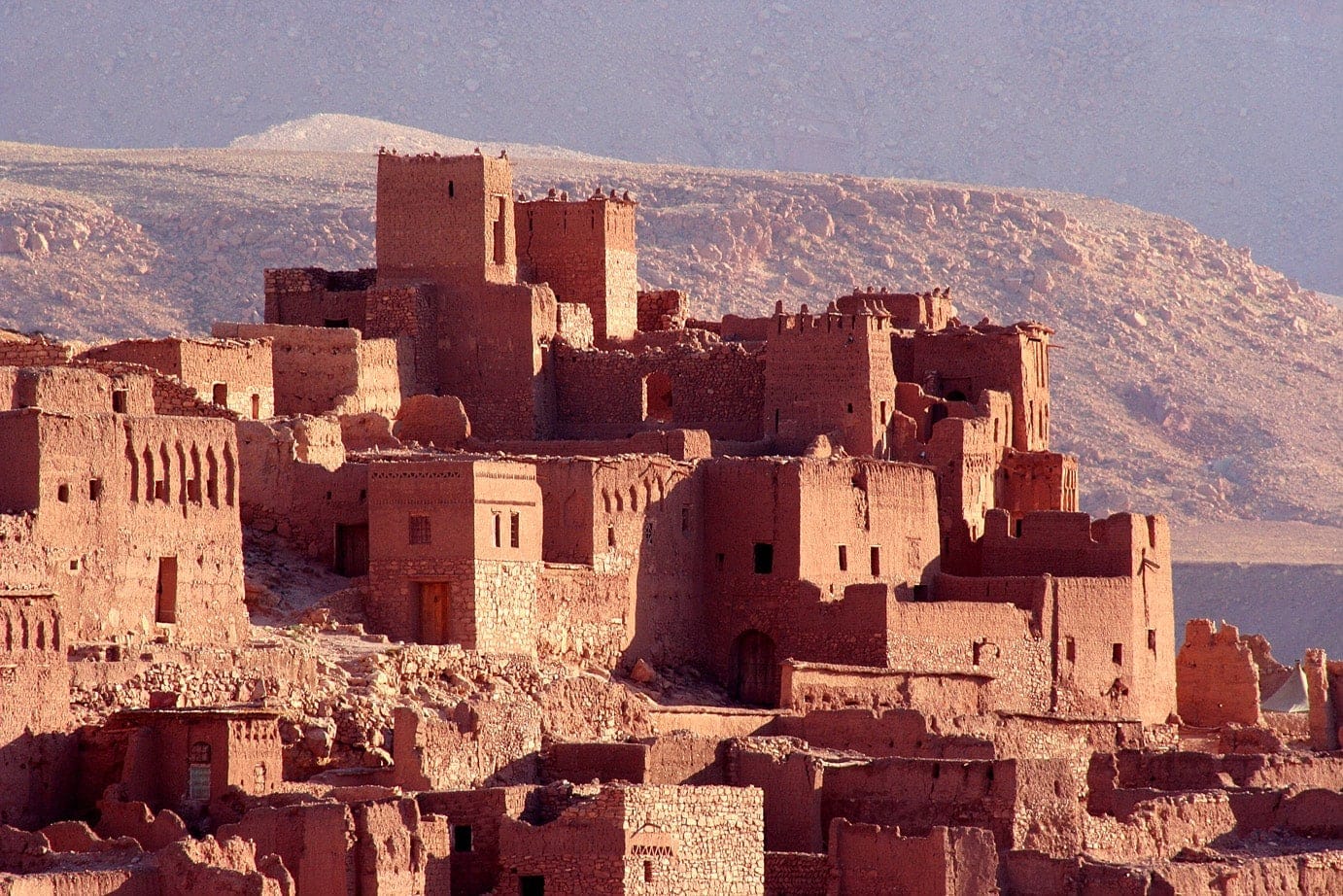 Curiously, the relationship between roadway infrastructure and urban – even cultural – development is interesting. In Westeros, there are many roads, and commerce is flourishing. In Essos, everything seems frozen, and abductions and slavery are common all over the continent. This happens with the horsemen of the steppes.

The ephemeral architecture of the horsemen of the steppes

Medieval brickwork construction is a recurring factor in the series, but this doesn’t leave out another type of architecture, such as the ephemeral architecture of the horsemen of the steps, or dothraki. Maybe you’ve heard of Khal Drogo. These people live like the nomadic populations of Southwest Asia did, and how some still do in neighboring regions: they move from one zone to another by using animal labor, and they build temporary tent dwellings. The roads are created as they walk across the grass.

This type of architecture is portable and corresponds to needs in a part of the world with very few resources for humans, such as deserts. With its cold nights and hot days, Dothraki Sea is a plain where cultivation doesn’t seem to be an option. So it’s understandable that the population hasn’t settled in one spot and started to build with other materials. 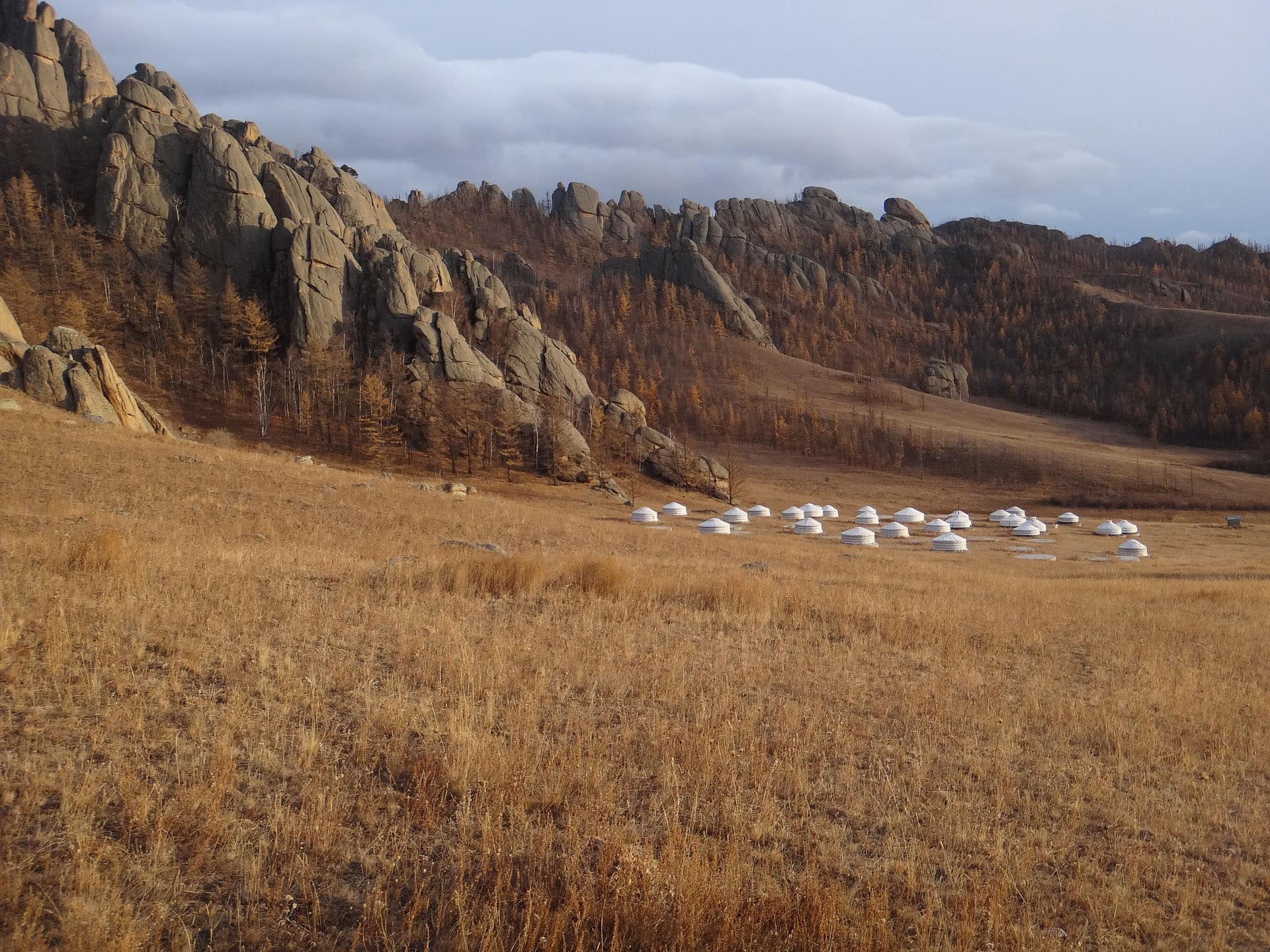 On several occasions throughout the series, especially at the start, we see how they build these temporary settlements. As well as how they dismantle them in just one morning. Currently, these sorts of communities are still in existence in many places around the world, such as Mongolia (above).

What about interior design in Game of Thrones?

Indoor architecture is also something that has been taken into account, even though it’s subtler and much less characteristic of certain cultures. In fact, there tends to be more than one cultural element in each living room, even though there are very cohesive patterns in all of them.

For example, King’s Landing  is a place of contrasts and power. On one hand, the opulence of palaces and religious temples stands out, where the windows are even wider than in other buildings in the same city (Great Sept of Baelor); while on the other, the series shows us neighborhoods with a high concentration of citizens without basic services such as potable water (Flea Bottom). Tragically cohesive.

It is also consistent with the interior decoration of other spaces, such as Meereen. In the city, a 250-meter high pyramid serves as a palace with references to Mayan architecture, and that’s precisely what we find inside. In the drawing above, by artist Kieran Belshaw, we can see columns, walls, and beams decorated in this style.

If we go to the North, on the other side of the wall we can also find decoration typical of a cold place in Craster Tower. In reality, this “tower” isn’t very tall, already surrounded by trees so there’s not a lot to see (a point for architectural consistency). Inside, we see a space chock full of objects, all of them useful against the cold: layers, blankets, firewood, wood for building, straw… And no gold.

Beyond the hype around the series, which grows every year and gains intensity, the one thing that is for certain is that the creators at HBO have hit the bull’s-eye in terms of the architecture of Westeros, Essos, Sothoryos, and the islands. Both superficial analysis of and a conscientious look into the universe of R. R. Martin show that these details have been taken into consideration. 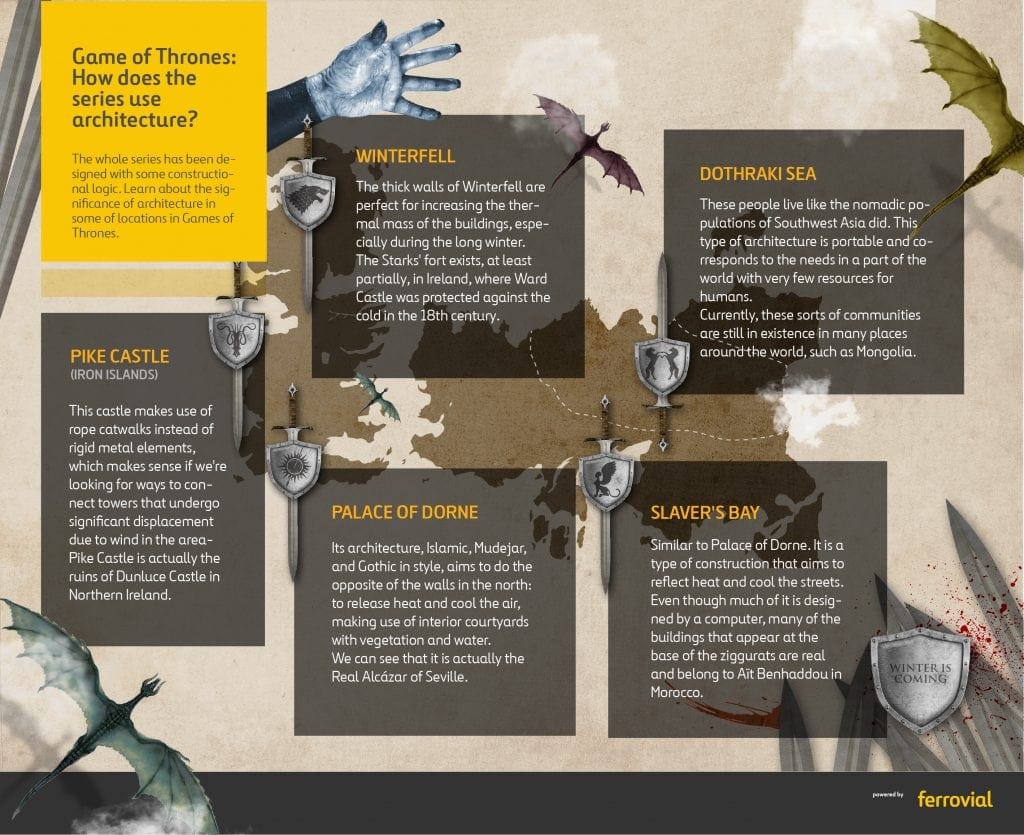