When we talk about construction, the first thing that comes to mind is modern buildings, theaters, stadiums, new living spaces… But there’s another field of construction that is as specialized as it is necessary: renovation. A few years ago, I came to it without much knowledge of it, and little by little, I discovered that feeling of restoring life and light to darkened buildings.

The Beti Jai is one example of a site of resurrected heritage that was found forgotten. In its walls, the clock had stopped almost 100 years ago, and it grew old and dark. But this year, we want to give it its luster back – and that we did.

For those who don’t know Beti Jai, I’ll tell you that it is a surprising building that captures whoever gets to know it. It brings a lot of characteristics together to have that effect.

When we got there, I remember that feeling of abandonment, deterioration, and darkness that everything frozen in a different time seems to give off. There were still palpable traces of its majestic aura from another era.

Behind a facade on Marqués de Riscal street, hidden by mesh and scaffolding for years, was a hidden space from another time, right in the center of Madrid, a few meters from the impressive Paseo de la Castellana. 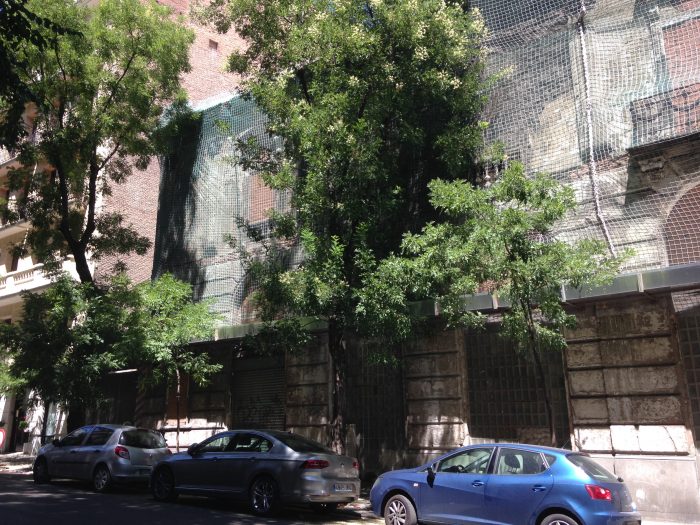 You never would’ve imagined where that side street could take you. In some yesteryear, it was the way to a café that years later it would be cornered in by the neighboring building. It’s a fronton, and not one of the ones we would now picture. It’s a fronton with majestic stairs, almost like in a theater. 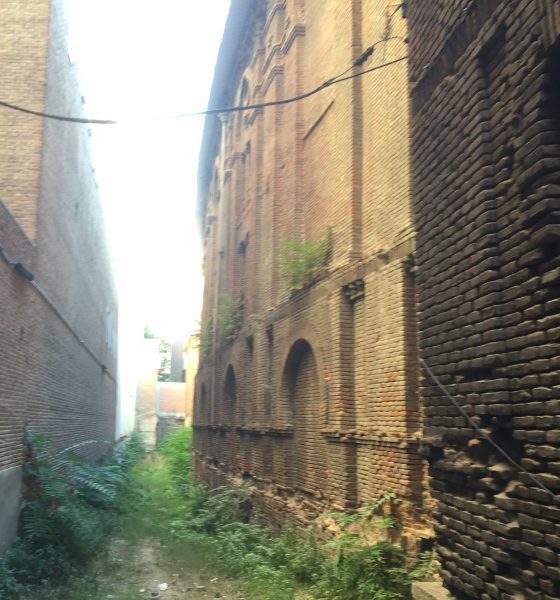 All this that I’ve told you led a group of people to join forces to bring it out of its state of oblivion one day many years ago, and not without the help of those they found along the way (institutions, neighbors, friends, city hall…). Whoever sets foot on the Beti Jai court for the first time never forgets that feeling. 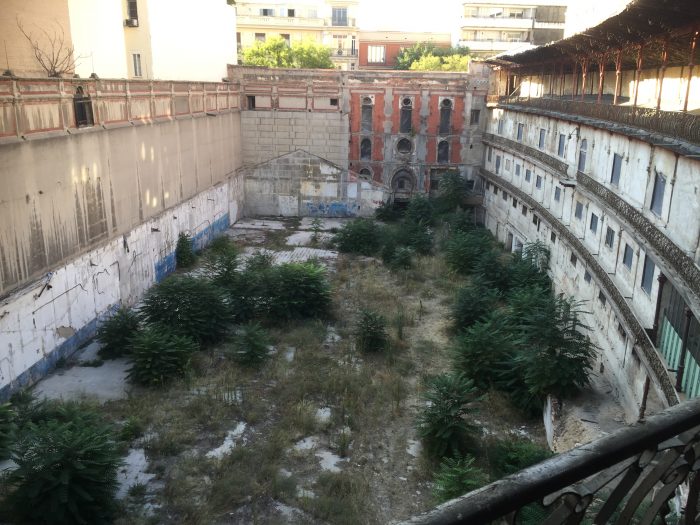 How did the Beti Jai get its start?

The fronton was envisioned by Joaquin Rucoba, the architect behind buildings like the Mercado de las Atarazanas, the bullring in Málaga, the Arriaga Theater, and more, commissioned by several entrepreneurs spearheaded by the Basque Pepe Arana, considered to be the father of the weeklong celebrations in San Sebastian that even in our time have been the subject of press coverage for their controversial heritage

Beti Jai opened 125 years ago on May 29, 1894, to much excitement, since it aspired to be the most emblematic of the four frontons in our city at that time. For those who don’t know what a fronton is, it’s the court where different styles of ballgames are played. 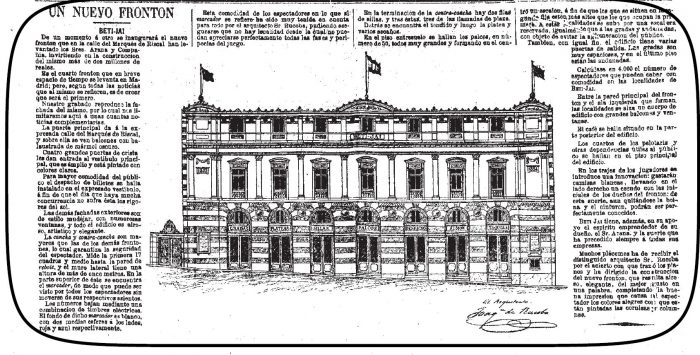 During this research process on the building and its history, our first big surprise was finding out that sportswriters of the time followed progress on the building and wrote about it. Imagine what that meant at the time! Some of them made their opinions for or against the entrepreneurs that supported the Beti Jai clear – for example, in this article from El heraldo de Madrid on March 27, 1894. 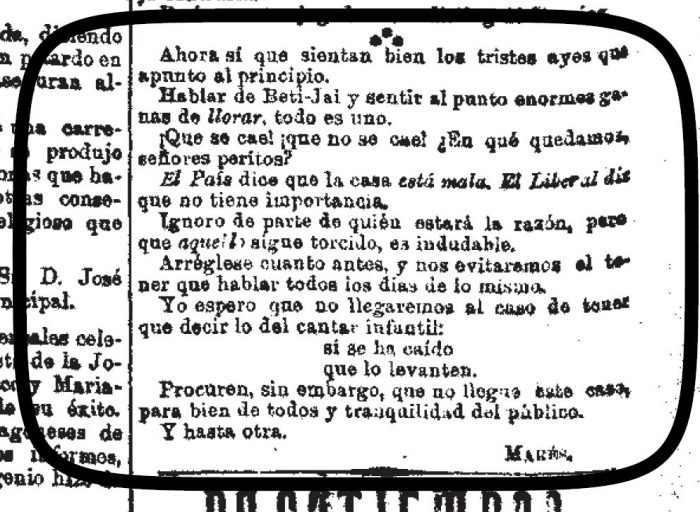 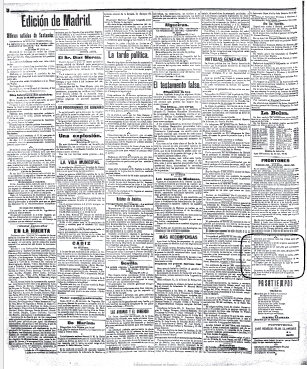 It was open on and off for 25 years until 1919 (exactly 100 years ago) until a license was requested to open a car workshop there. That was when Beti Jai started on its path towards oblivion and deterioration, going through many subsequent uses and changing hands often.

In the 21st century, it’s state of deterioration is even clearer. Over the years, there have been numerous interventions needed for its façade, roof, and interior. In fact, there was even a fire that caused the death of a security guard, and it was also occupied.

How it emerged from the ashes

In 2008, the platform Salvemos el Frontón Beti Jai de Madrid  (Let’s save the Fronton Beti Jai in Madrid) was started with the intention of fighting to claim the building as a Bien de Interés Cultural, a site of cultural interest, an objective accomplished in 2011. It’s important to remember that the building was privately owned. A few years later, the City Hall got to work, and finally, in 2015, Beti Jai became city property.

The first measure taken by the city council was evaluating the state the building was in, and that’s how our relationship with Beti Jai began, right after finishing restoration work on our beloved Plaza Mayor.

It’s more than restoring a building – every detail counts

From the start, we clearly saw that finding the building like this after so many years of misfortune was a miracle. Our work started by making sure of where we were walking and what we had on our hands.

We started with the analysis of the structure’s state, sizing and photographing whatever we found. Here, a fascinating world of using of new technologies for manual restoration was opened up to me by my colleagues in the department of innovation.

Very soon, we discovered that the state the building seemed to be in wasn’t only an atmosphere, but rather there was an imminent risk of parts of it disappearing. It started with the urgent consolidation of the building, always complying with the demands and specifications outlined by the degree of the building cataloging (the highest) to the letter, without altering the aesthetic or appearance of the Beti Jai’s original design.

Little by little, the walls that had at the same time darkened and protected all of the Beti Jai’s highly characteristic arches were taken down. One of the surprises in store was its good state of preservation, thanks to their existence. Its arches saw the light of day once again, renewing that feeling of transparency, lightness, and majesty to the stands. 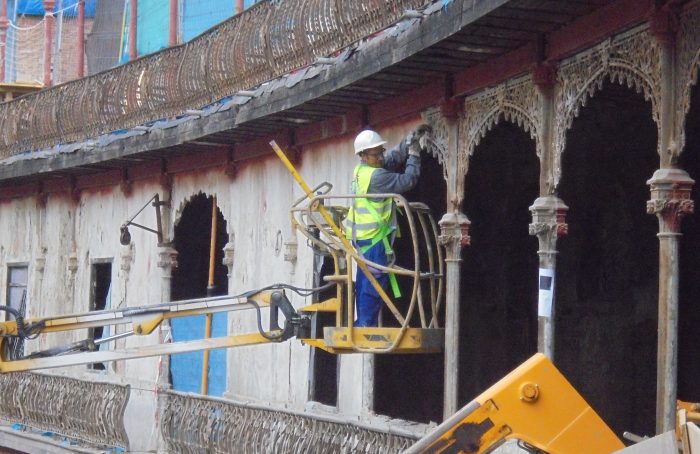 During the building’s restoration, we’ve had to reinforce the structure while avoiding altering its aesthetic. Some 95% of the Fronton joists have been saved, reinforced and protected. They are original to the building, including those that have that highly characteristic curve that Rucoba designed to facilitate installing the stands. 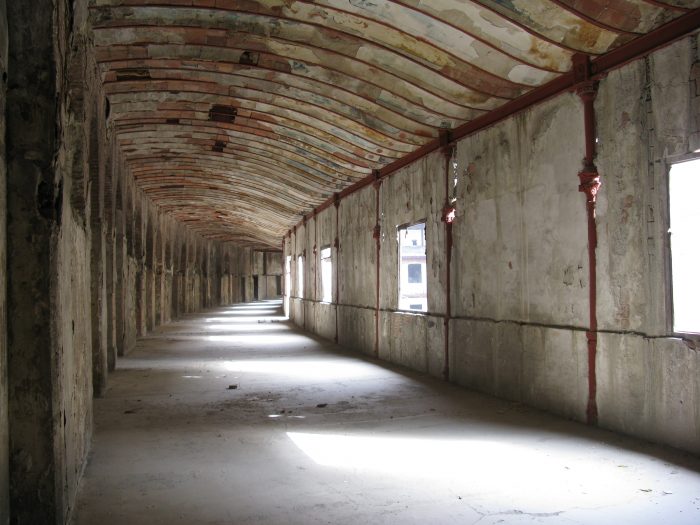 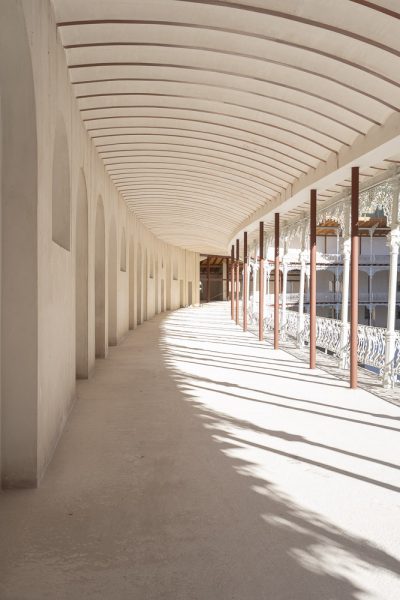 Another unique aspect is its walls. It was necessary to look at as many photos of them as we could find over the course of the Beti Jai’s lifetime time and time again, given the state of deterioration in which they were found. Continuing the fronton’s lucky streak, we could restore even the most unexpected things. 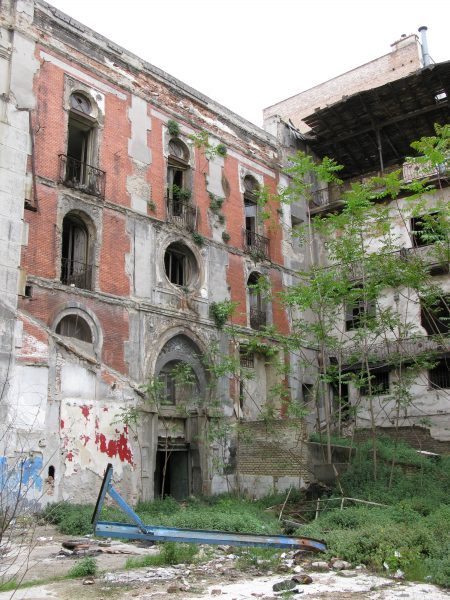 We could tell so many tales of curiosities and details. One example was the arch that showed Arabic influence on its inner wall. The little of it that was left crumbled in our hands, but in the process of removing the innumerable fake partitions there, we found its twin hidden inside, perfectly preserved. 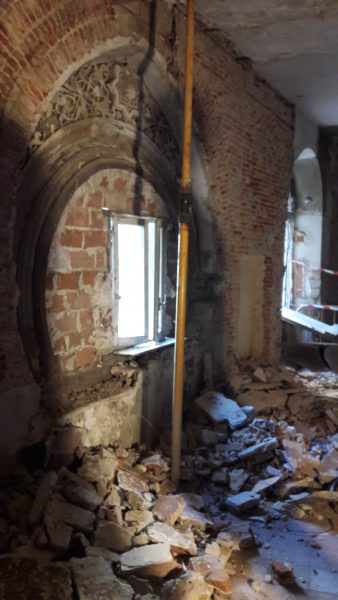 That way, we had the template to restore all the decorations on this arch, a highly representative element on this inner wall. 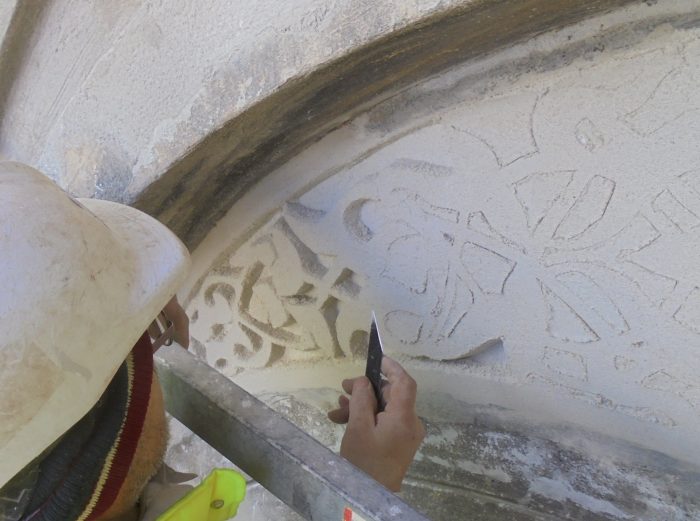 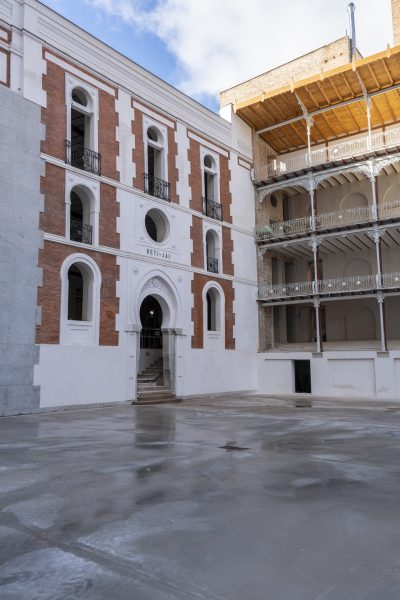 On the wall facing Marqués de Riscal street, something similar happened to us with the shields, the column capitals, the bases, the balustrades… Despite the wear of all those years of abandonment, it was possible to recover all those elements, sometimes by reconstructing them and others by using molds from original pieces that also needed repair. 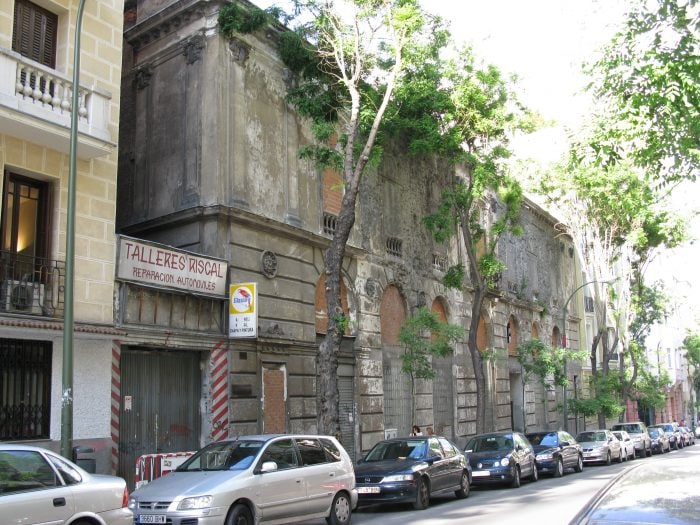 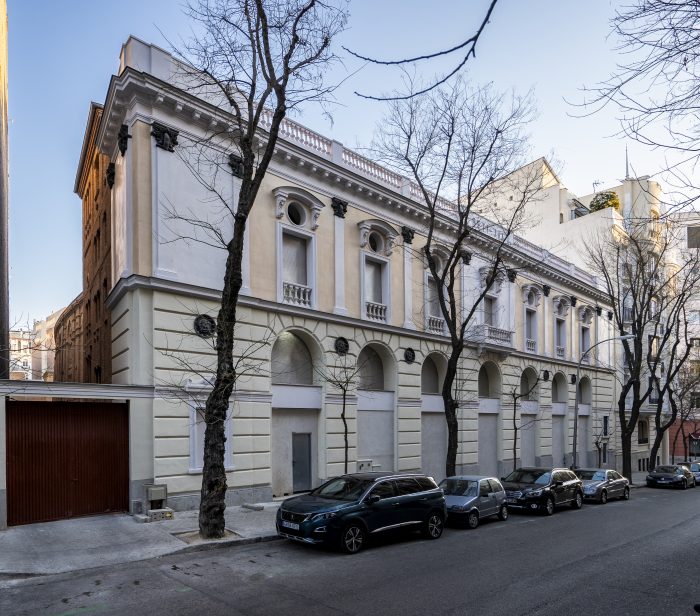 Beti Jai – as with all restoration projects – held many mysteries for us, some of which we’ve managed to decipher through research with everything that’s happened and that we’ve had in reach; as for others, only those who built it know their secrets. One of the things we did manage to decipher was the material on the covering leading to Marqués de Riscal. The roof had been renovated recently with tiles, but for the rest of the fronton where there was the original covering, the material used was zinc, so it had always been thought that this was also the original material for the renovated covering. However, we found some tiles gathered in a corner, and, like everything else in the Beti Jai, they weren’t just any tiles. There were tiles with a very unusual inscription and relief design. 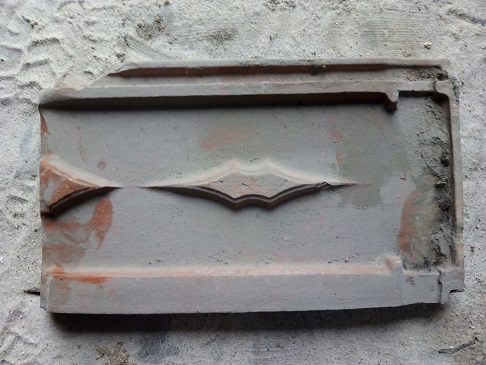 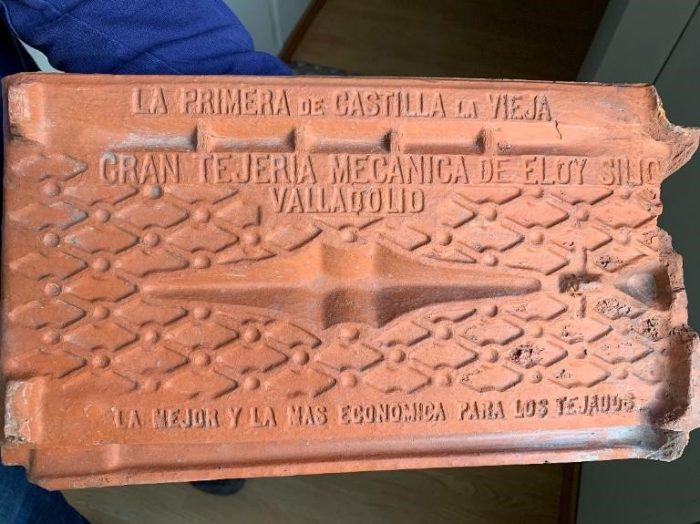 We soon found out that they were the original tiles. The tile maker was founded in 1884, and even today the building where it was located is still standing in Valladolid. The newspapers spoke of its quality years before the construction of the Beti Jai. Rucoba, faithful to its innovative line at a time when flat tiles weren’t very common, decided to use this material for the more stately body of the Beti Jai. 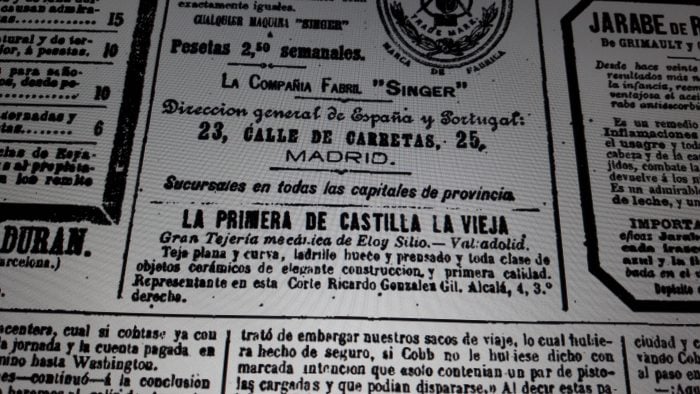 These tiles were used to manufacture the reproductions that are today found on the renovated covering of the Beti Jai. 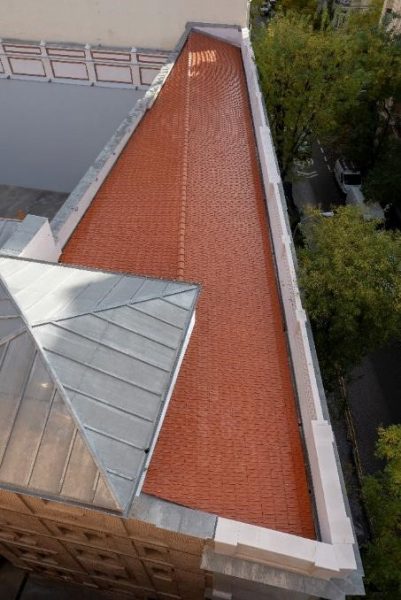 Bringing the light back to the Beti Jai

The Beti Jai Is the result of the effort, struggle, and work put in by many people, from those who fought all those years to bring it out of the darkness, to those who were committed to keeping it from ruin even without knowing its definitive purpose, and even those who have put so much care into faithfully replicating each painstaking  filigree and detail of its parts by hand. The specialists from the City Hall, led by Mariluz Sanchez Moral, deserve special recognition. They’ve shared this day-to-day process with us, fighting for the common goal since the start, when it seems like a delicate, dangerous job, given the state the building was in, until its end when the Beti Jai got its shine back. 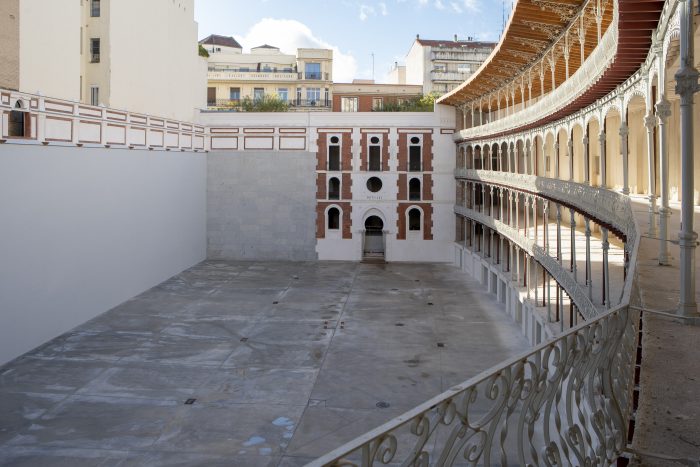 When I look out at its renovated field, I can’t help but remember all those days when it’s delicate state overwhelmed and worried us, and feel very proud of having been able to participate in making the dream of so many people a reality through my work. 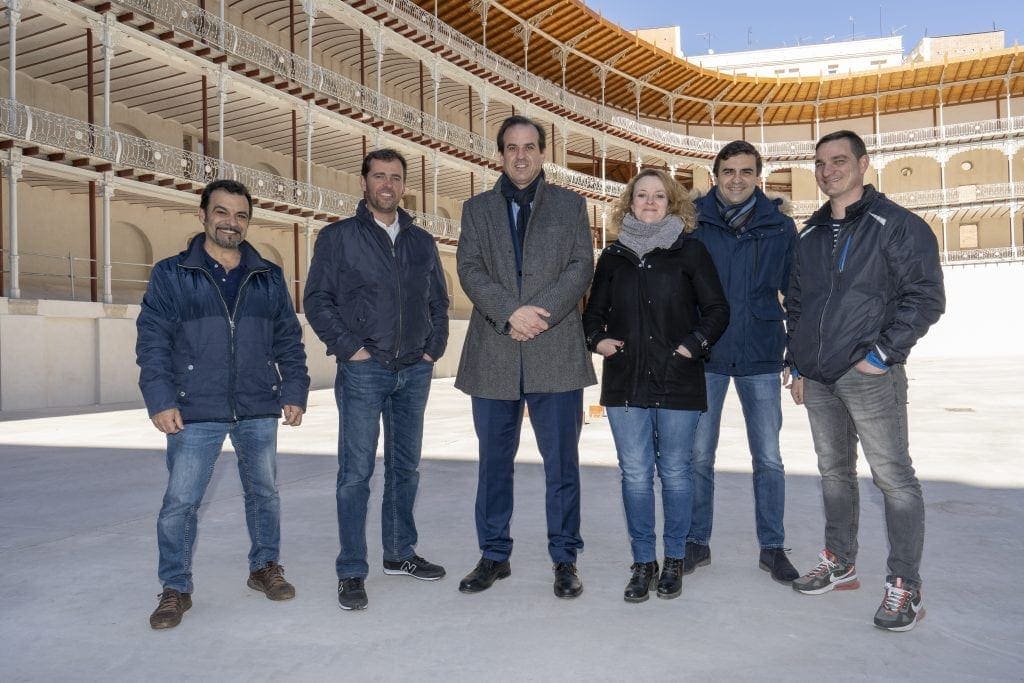