What Does a Swimming Pool Have to Do with the Future of On-Site Safety?

In the area around a lake located in a historic park where the capital’s busy residents come to relax in nature, no one would ever suspect that new technologies for workplace safety are being tested. But there, on the site of Madrid’s Casa de Campo Sports Center, the Internet of Things (IoT) and some of the latest advances in sensory technology have come together in a project aiming to facilitate how hazards in construction projects are managed.

In the R2 project, Ferrovial Construction and its technology suppliers have implemented a pilot system for communicating with and warning workers, increasing monitoring on-site and avoiding potentially risky situations. To this end, the system makes sure that only authorized personnel are on site. Access is denied to unqualified or unauthorized personnel, and there are direct channels between site management and workers.

Madrid’s Casa de Campo Sports Center, which is located near the lake in that park, was declared a Site of Cultural Interest in 2010. The construction work, which spans a total of 8,400 square meters, involves comprehensive remodeling of the summer and winter pools. The recently-completed project sought to bring balance to the existing environment, its historical origins, and accessibility needs. 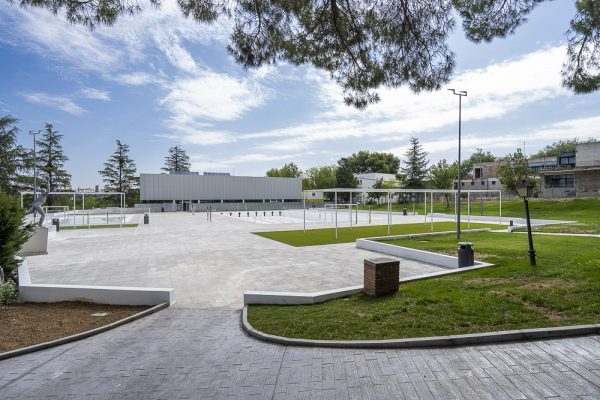 The end result: completely renovated facilities and two outdoor and two indoor pools for the sports center. The pavilion also has two rooms for playing sports, a training room, offices, changing rooms, maintenance rooms, a first-aid kit, and a storeroom. The pavilion’s roof has also been landscaped.

In addition to the construction, the R2 project was carried out while the covered pavilion structure was built. This was a pilot experience for pioneering research in construction safety; each worker wore connected wristbands, and a series of communications signs were set up throughout the construction site.

“R2 is a research project aimed at workplace safety involving increased monitoring and management for workers, such as obtaining real-time information on potentially hazardous situations,” explains Tobias Hanel, head of this Innovation project at Ferrovial Construction. “The idea is to create a system for monitoring risks three ways: monitoring capacity on the construction site, denying access to unqualified or unauthorized personnel, and opening a communications channel between site management and workers.” 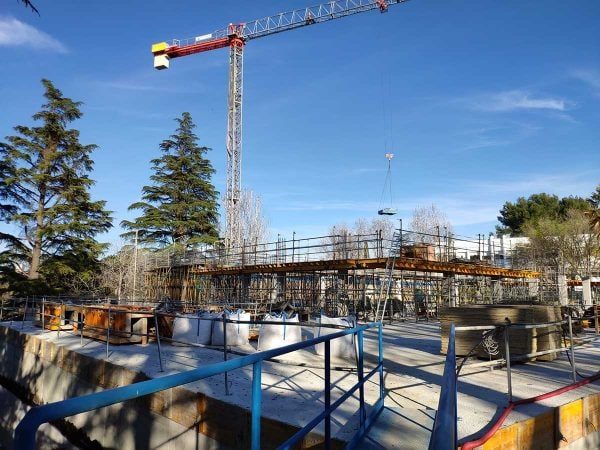 The system that was rolled out for the R2 project is divided into the tangible hardware and the software. The site hardware consisted of two elements: the individual bracelets that each worker wore throughout their day, and a series of markers at each entrance to the site and at various points within the site.

Information from the bracelets was received by the marker, and every 30 seconds, the data was sent to a centralized platform, software that allowed the project manager to consult the information. Both the bracelets and the markers collected data using two different technologies.

To monitor access, workers scanned the NFC (near field communication) tags on their wristbands with the readers at the markers located at entrances. A scanned NFC tag is then registered in the system, showing that the worker is entering or leaving a certain area.

Moreover, through an automatic detection system, the wristbands periodically sent information to the markers through UWB (ultra-wideband) technology. Whether a worker is entering or leaving a certain area of the worksite can be determined by comparing which marker received that communication before. 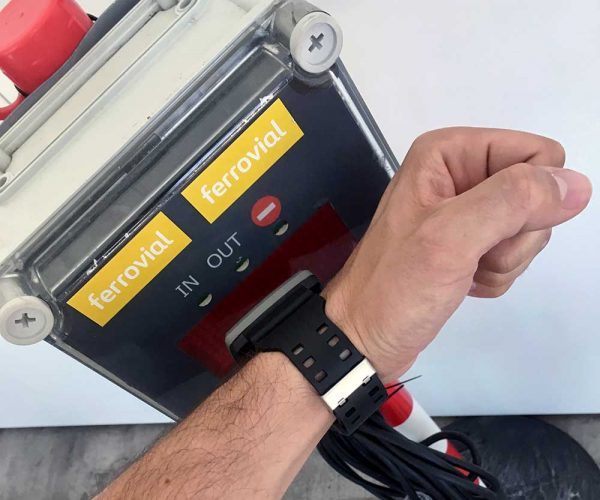 “The information was received almost in real-time. For instance, we could find out exactly how many workers were on-site at any moment,” says Tobias Hanel. “Two communications channels were also set up: one from the worker to the coordinator/manager of the site, which we call the panic button, and another from the monitoring center to the worker.”

The panic button, which is located on the bracelet, can be pressed in an emergency, and it triggers an alarm on the management platform, where decisions are then quickly made. In case of emergency or the need for evacuation, the site coordinator can communicate with workers by sending messages displayed on the signs and on small screens located throughout the site.

“It’s been a pilot test, but generally, I think there’s a lot in store for it. This way, the system ensures that only authorized personnel can access the site. These are professionals who know the risks involved and who have received the relevant training to work in that area. In addition, being able to convey visual information to workers quickly and notify them on the construction site improves efficiency in the event of an emergency. It’s a way to ensure that information is relayed in a fast, efficient way,” Hanel adds.

Moving forward, the next step will be to draw on what was learned from R2 to design a new pilot project. In this new phase, other IoT technologies will be tested, including smart helmets and some sort of signage that can be incorporated into clothing or personal protective equipment (PPE). Then, once the system has been polished, it will gradually be scaled to all sites.