After Filomena: How We're Working on Clearing Snow off Our Roads

The snowstorm dubbed Filomena brought the biggest snowfall that Spain has seen over the last few decades. Overnight, the streets turned white. Residents all over the peninsula – some more surprised than others – found themselves snowed in as their homes and towns were cut off by the snow.

Ferrovial Services’ road maintenance and operation crews didn’t hesitate to respond. Since, a team of 450 workers has been working in shifts under the most adverse weather conditions with a single goal: clearing snow and keeping ice from forming on the roads so that everyone’s lives can get back to normal as soon as possible.

The first step to roadway recovery after a snowfall as intense as Filomena is removing snow from the road. Preventive treatments for ice and other remedial methods against the snow are also necessary. Over the last few days, the communities of Madrid, Castilla la Mancha, Castilla y León, Navarra, and Aragón – those most affected by the storm – saw a large winter road system put into place. In all, 152 fully equipped snowplows, four turbo milling machines, and several backhoes have worked on the roads. This equipment was needed to remove the snow from where it had accumulated the most. 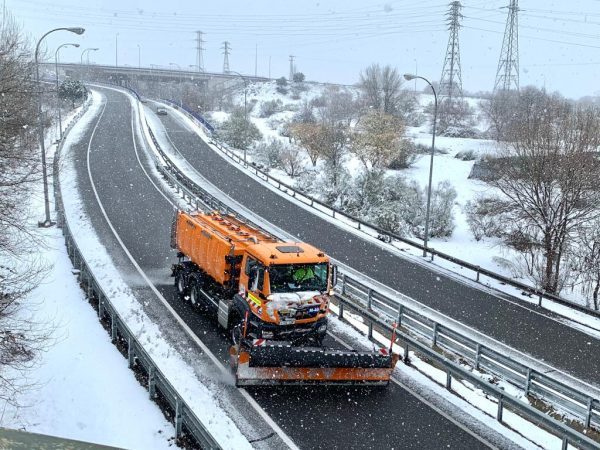 The type of snowplows available in the contracts usually varies depending on the area and the type of road. This time around, they’ve used machinery equipped with variable-angle snowplow blades and wedges, telescoping front blades, and front and side blades. Spreading equipment with both solid and liquid (brine) flux has also been used. In Zaragoza and Madrid, equipment with telescoping blades and front and side blades has been used, as this broadens the working area up to 6 meters wide. This machinery can clean two lanes at a time.

However, this storm left so much snow that even snowplows couldn’t budge on some roads. In these extreme cases, they had to turn to turbo milling machines. These are common around mountain passes. They disintegrate the snow with milling equipment before sweeping it out with a turbine, expelling it several meters away. Backhoes have also been used to remove snowbanks in the worst areas with limited access.

People give 100% in these situations. They’re facing this as a potential emergency and are doing everything in their power to get everyone back on the road safely as quickly as possible.

There are 450 workers behind these efforts that have been doing their best for days. They’ve made enormous efforts with long working hours in harsh conditions. Work went on 24 hours a day in 12-hour shifts until we got the situation under control.

They often couldn’t return to their homes since they were cut off by snow. In the most heavily impacted areas like Madrid, Zaragoza, and Navarra, we set up stations where they could spend nights and off-hours there. When possible, they were taken home on ATVs at the end of their shifts.

The conditions these workers endured the first few days were harsh. Besides the weather conditions, they also had to continue removing snow and icicles from structures, carry out road treatments to keep ice from forming, and support emergency services, all in the midst of a cold snap with temperatures dipping below -15º. 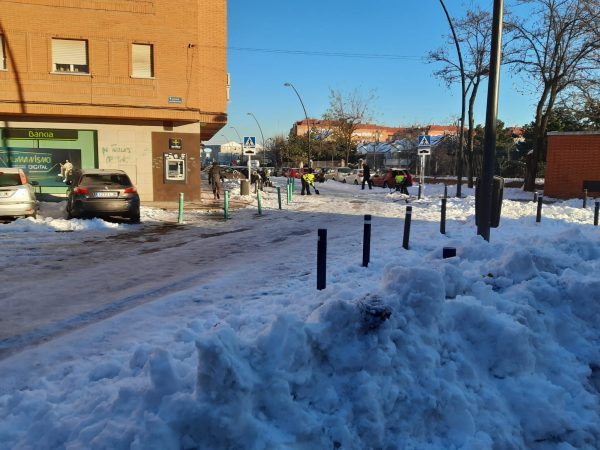 However, each and every one of Ferrovial Services’ workers has once again shown that people give 100% in these situations. They faced this as a potential emergency and did everything in their power to get everyone back on the road safely as quickly as possible.

The threat of ice

After the snow came the cold. Filomena left behind a wave of intense cold with low temperatures that threatened to turn the snow into large sheets of ice. To avoid this situation, we carried out continuous preventive treatments day and night, covering the roads with tons of flux materials.

The most common of these is sodium chloride – salt. For the harshest cold snaps, though, it is mixed with calcium chloride; the proportions depend largely on the expected temperatures. The machines spread these substances in bulk or diluted as brines to cover the entire surface of the road well.

This work made it possible to control what the storm left in its wake. Our clients – including the Ministry of Transport, Mobility, and Urban Agenda, the Government of Navarra, and the Community of Madrid, to name a few – saw that it didn’t take long for vehicles to get back on the road without any major incidents. Traffic returned to main roadways first and later secondary routes, as possible. This was all in spite of the fact that snowfalls as impressive as these are quite unusual, coming to Spain only once every few decades.