Internet of Things: When Our Clients Aren’t People, But Their Vehicles

Televisions, washing machines, radiators, and of course, our own vehicles. In the coming years, the Internet of Things (IoT) is expected to become increasingly present in everyday objects. In this new reality, things in the physical world connect, communicate, and have discussions. This is a world where things – our things – can make decisions autonomously and intelligently.

This paradigm shift is forcing companies to redesign their strategies and rethink almost everything they do in communications and sales, from how they conceive their products to how they publicize them. As highway operators, one of the questions we’re facing is how we will interact with new drivers; in a matter of just a few decades, they will no longer only be people but also smart vehicles.

A world where machines think

The Internet of Things is the digital interconnection among objects through the internet. Any device, even the most everyday item, can be turned into an IoT object as soon as it is equipped with sensors and put online.

But why would we want to connect any old object to the internet? The answer is simple yet complex at the same time: to be able to access new information that gives us a competitive advantage. Once connected, devices can interact with each other and autonomously perform many actions that, until now, had to be set up by a person. This changes a device’s nature, and its interactions and potential use cases grow exponentially. Knowing it is the key to utilizing it.

As for vehicles, for example, connectivity makes it possible to update maps automatically through their own apps or to access service platforms, such as charging for electric vehicles or a flat parking fee. A connected smart vehicle is also one capable of making its own decisions. In a smart city, this type of vehicle can suggest where to park for the best price or which routes to take based on traffic density and pollution restrictions. On smart roads, a vehicle could decide on the route for a trip based on the daily routines that its user already knows, such as where to go for vehicle inspections based on Google Places ratings or when to turn the heater on at home just by getting into the car.

Connectivity opens up a world of possibilities where humans are increasingly delegating tasks to technology. This will lead to the creation of markets that don’t even exist yet, markets where the clients are the machines themselves. This paradigm shift alters the industry’s structure by offering new opportunities for companies and an immense range of possibilities. The number of devices connected to the internet is estimated to have reached 22 billion at the end of 2018. Predictions suggest that there will be almost 50 billion by 2030. 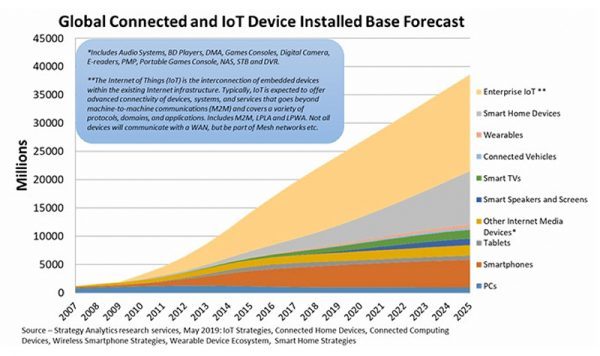 The challenge of communicating with our vehicles

The first major challenge before delving into new business models derived from the IoT explosion is learning to communicate with things – especially vehicles. This is done by digitizing city infrastructures, roads, or highways to establish a dialogue between the two.

Once the infrastructure is digitized, IoT devices are responsible for collecting information about everything happening in the environment and sending it to the vehicles while simultaneously collecting the information that the vehicles share. That’s how dialogue starts simply. It’s possible, for instance, to install sensors that report road conditions and set off alarms in the vehicle if ice has formed on the asphalt. The devices simultaneously send an automatic message to information panels read by human drivers and a standard warning to self-driving cars.

Similarly, they can send alerts about accidents, traffic jams, or any incidents in the vicinity. Offering this sort of information increases road safety, which will be essential when traditional and self-driving vehicles are operating on the same roads.

From the moment we can establish a basic dialogue, moving to the next level takes just one more step. This exchange of data can also benefit companies, which can now attract users by offering information and services beyond the traffic environment: for instance, is this highway a place where I can switch on the autopilot and forget about driving? Is there any sort of advantage that can make my journey a better experience? Or is there heavy fog, meaning it’s the safest option for right now?

Understanding what the vehicles traveling through certain places need and how they act opens up the possibility of offering platform services. These can span many benefits, ranging from paying for the highway itself to reserving a place in the parking lot closest to our destination, and even including entertainment systems in the vehicle and third-party infotainment systems.

Improvement to the service has been considerable, thanks to subscriptions and the exchange of information. First, knowing which customers are on the roads allows us to better understand what their needs are. Since vehicles have many sensors that interact with the road in many different ways, it’s possible to share a lot of interesting information from a marketing perspective – marketing that is now quite different. Talking to a user is not the same as talking to their vehicle. The latter can give us all kinds of information: how many kilometers are traveled per day, what type of energy they use, or what radio programs are playing while traveling, for instance. Just as our cellphones know our tastes and routines, it’s only a matter of time before vehicles know our needs better than we do – and having information on these new behaviors is a competitive advantage. This makes it possible to retain customers and give them better service while strengthening the business.

Thinking from the standpoint of infrastructure: CINTRA’s case

This context leads us to wonder about the possibilities of a new way of doing business. A new sort of client is coming into our sector. We know nothing about that kind of client right now. Staying active is key for infrastructure to contribute not only to improving the entry of connected self-driving vehicles on our roads, but also protecting the safety of all drivers alongside autonomous traffic. We still don’t know how these categories will interact.

At CINTRA, we’re already developing the basic technology that will open the door to dialogue with vehicles, a new generation of IoT devices designed to detect risky situations on the road and communicate with any sort of vehicle in real-time – whether self-driving, connected, or conventional. These risky situations include the presence of any slow or stopped vehicles, cars driving in the wrong direction, or pedestrians or cyclists who shouldn’t be traveling on expressways. These situations can be detected easily with Cintra’s unique technology.

The devices launch a visual alarm through platforms such as Waze or on variable-message signs for conventional vehicles, or entirely through telematics for connected or self-driving cars. By providing this information at the right time through the right channel, we allow all users to take preventive measures that increase their own safety and, by extension, that of all users.

This solution also has a parallel channel for direct communication with the Highway Control Center. First of all, this helps reduce the time it takes to detect a risky situation and alert drivers to it; it’s estimated that 30% of dangerous situations are currently not detected. Secondly, it’s capable of sharing and displaying risky events from other platforms, such as the presence of civil protection services or a crane operator towing a damaged vehicle on the shoulder of the road.

IoT technology also mitigates the financial and social cost of accidents. The DGT’s data shows that each roadway death cost over €1.5 million in 2019, including all direct and indirect expenses. One wounded person who was hospitalized cost more than €250,000, while someone who was wounded but not hospitalized cost around €7,000. These impacts can be reduced in many ways, but first and foremost is automating parts of the process to have accurate and timely information on what is happening at all times to make the right decisions.

Questions for the near future

These sensors are currently being tested on a one-kilometer stretch of highway operated by Cintra; soon, it will enter the pilot phase. At the same time, we’re continuing to work on sketching what the future may look like. To do this, we ask ourselves many questions: is using self-driving vehicles going to affect our behavior as human drivers? How do we tell a machine about a highway’s safety and the services offered to influence the decisions made by its algorithms?

Just a century ago, the world switched from animal-drawn vehicles to mechanical-powered ones between 1915 and 1930. In those 15 years, there was a significant drop in the number of accidents on the road. This was thanks to the introduction of new technology that long preceded the first traffic codes. Today, much of our work aims at having a positive impact and making the technological transition of the coming decades possible.

We still don’t know what percentage of the population will still want to own a car or not, or if the introduction of new types of vehicles will lead some to move further away from cities. What we do know is where we want to focus our efforts: defining the new infrastructure standards of the future through constant dialogue with the most advanced IoT of connected and self-driving vehicles. Our ultimate goal is to improve the experience and safety of all users on our highways.