Plogging, the sport that helps take care of nature

Flygskam, köpskam and now plogging. The Swedes seem determined to fill our vocabulary with words for caring for the environment and sustainability. After naming the sense of guilt that you feel after taking planes and buying clothes when there are other options (flygskam and köpskam, respectively), they have come up with another word for the habit of picking up garbage when playing sports outdoors: plogging.

Learn what plogging is, how this sport has spread, and the benefits it offers for both our health and that of our planet.

More than just a walk

The word plogging is a combination of jogging and plocka upp (picking up, in Swedish). The driver behind this phenomenon was Erik Ahlström, who began to run around with a plastic bag for collecting waste when he moved from his hometown to the city of Stockholm and was surprised to see the amount of trash in its streets and parks. 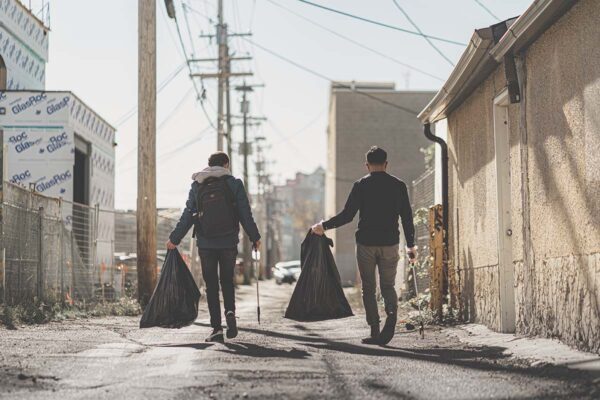 Today, plogging is an international trend that is gaining more and more followers. “It all started as a movement to change our environment and our habits here in Sweden. We’re now making a positive difference around the world,” Ahlström said in an interview. “In a way, we’re now running for a different reason. With knowledge comes care, and with care comes change.”

While plogging started out in connection with walking and running, the truth is, it can be combined with all kinds of sports and hobbies, such as cycling and skating. It can also be done with water sports like swimming, diving, and snorkeling. In fact, it is increasingly common for groups of divers to get together and combine cleaning the beaches and the seabed with their dives. 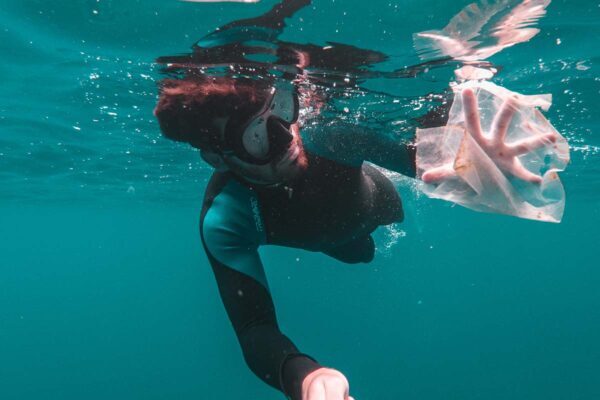 A diver picks up a plastic bag floating in the sea. Cristian Palmer (Unsplash)

To do this, you only need to have the usual equipment for the sport, as well as a bag and some gloves (if possible, those that are resistant to pick up sharp objects like pieces of glass, for example). You can also take several bags to separate waste, though the most common method is to pick up two types in particular: plastics and cigarette butts.

In 2009, a team of researchers from the Stockholm Resilience Center (Sweden) developed the concept of planetary boundaries: nine processes that are key to Earth’s stability. Each of these processes is accompanied by thresholds that must not be exceeded to ensure the stability to which we are accustomed.

One of them regards chemical pollution, i.e. the presence of man-made chemical compounds present in ecosystems. Unfortunately, this threshold has already been exceeded: today, more than 350,000 artificial chemicals are produced and present in materials such as plastics. They often end up in the environment and stay there for hundreds or even thousands of years, polluting ecosystems and entering the animal food chain. 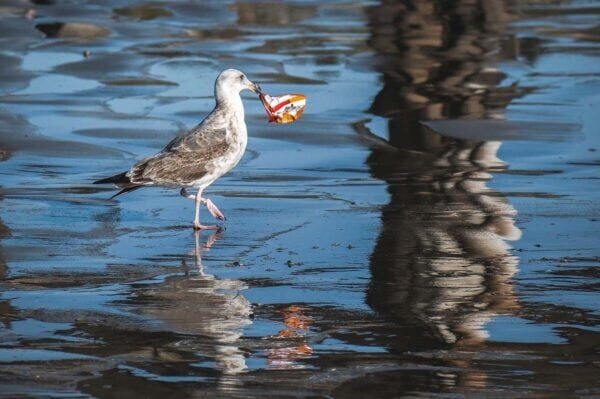 A seagull carries a plastic bag on its beak, an increasingly common scene on the coasts. Tim Mossholder (Unsplash)

According to Our World in Data, since plastic production began, 7.8 billion tons have been generated – more than one ton for every living person on the planet. In 2015 alone, 382 million tons were produced, and of that, only 20% was recycled. Some 25% was incinerated, and 55% was simply thrown away.

Many of these plastics end up in the oceans – a whale can consume up to three million microplastics a day – but they also have a serious impact on land. A new FAO study points out that farmland, the source of the food we consume, has even more plastic waste than the oceans.

As a result, it is common for those who practice plogging to find large amounts of this material (especially disposable packaging) on their routes. Bottles and bags aren’t the only types of waste found, though: it is estimated that 4.5 billion cigarette butts end up in the environment every year. That’s more than 8 million per minute.

The urgent need to take care of the environment and adopt more sustainable lifestyles has led more and more people to join the plogging revolution. All sorts of groups and associations have sprung up around it to encourage it, as well as to work on making nature’s cleanliness increasingly everyone’s responsibility.

In Spain, for example, the noteworthy Plogging Revolution community was born in Alicante and organizes activities across the country. There are also apps linked to this sport, and even some that can provide extra value for waste collection. One of them is Debris Tracker, which lets you record the amount and types of waste collected. The information collected helps scientists and researchers better understand the world map of pollution.