Rebar - The Reinforcement in Reinforced Concrete

Why reinforce concrete in the first place? Concrete is an adjective that, prior to it becoming a noun, was already synonymous with solid. How much more solidity do you need? If all we wished to do was compress the stuff, then perhaps we could have left it there. However, life is seldom that simple.

Reinforcement Bar (or simply, rebar) is typically made of carbon steel, hot-rolled, and extruded with deformations to increase its surface area, letting it bond better. Adding it to the concrete gel allows the combined material to become something neither merely rocky, nor elastic, but both; reinforced concrete combines the compressive strength (ability to be squashed) of concrete with the tensile (ability to be stretched) and shear strength (ability to be twisted or pulled in two directions at once on different parts of the structure) of steel. It can be squashed, stretched, and twisted (within reason) for the lowest cost per cubic meter of any building material. 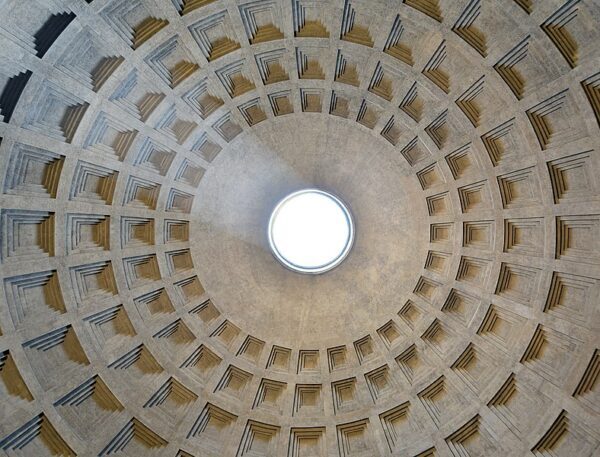 The Ancient Romans added a few ingredients to sand (most notably a pre-cooked, naturally occurring, volcanic powder analogous to cement from Pozzuoli outside Naples) and made concrete, creating structures of great beauty that have lasted for two thousand years. The Pantheon in Rome or the Alcántara Bridge in Spain serve as great examples; the Pantheon’s record as the largest, unreinforced concrete structure has never been broken. Nevertheless, they ran into many of the same problems: Concrete compresses and squashes well, it can even develop cracks without falling to pieces, but it doesn’t stretch well at all.

Once the empire crumbled, concrete fell out of fashion again until the eighteen hundreds. French gardener, Joseph Monier, combined it with steel wire to make pots to keep large tropical plants in greenhouses; pots that didn’t need to be baked like clay and wouldn’t break under tension as the plants grew. By an extraordinary stroke of luck, steel and concrete chemically bind very well, and expand and contract at almost the exact same rate under temperature changes. If they didn’t, the rebar would break out of the concrete, like soda from a can in the freezer.

At the 1867 Paris Exposition, François Hennébique saw these plant pots in action and quickly realized their potential, setting up his own firm that same year. By 1892 he had the patent to use reinforced concrete in construction. Since then, the fashion for building ever higher has continued apace and the modern world has grown hand in hand with the buildings that house it. The great buildings of antiquity took decades, with many generations of one family working their entire lives to complete some cathedrals. Cologne Cathedral in Germany for instance spent 662 years under construction. By comparison, the central core of the Shard in London, one of the tallest buildings in Europe, was finished in less than six months.

The Trials and Tribulations of Rebar

Reinforced concrete ultimately has to tolerate the same forces that destroy mountains: weathering and erosion. As concrete deteriorates and develops cracks, water can enter and corrode the rebar, expanding and cracking off the outer layers of concrete as rust expands the metal. This in turn exposes more rebar to the elements, which accelerates the corrosion process. Buildings must continually be assessed to ensure that they don’t put their occupants in danger. 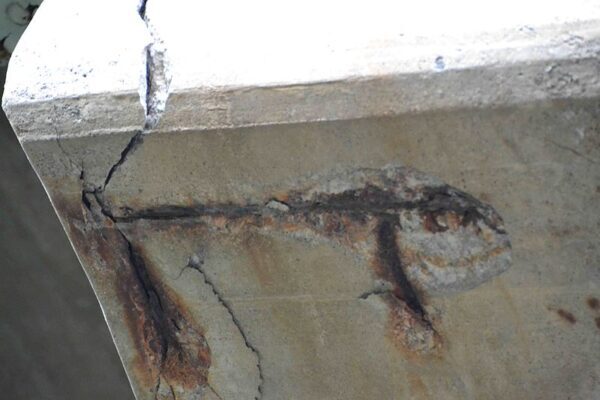 Location also plays a factor. One of the biggest risks to standard carbon steel rebar or “black” bar, is salt. Rebar naturally forms a protective outer layer under ideal circumstances, but this can be easily eroded by Cl- or chloride ions. In solution, salt or NaCl naturally forms chlorides, and this readily reacts with the rebar outer later and greatly speeds the process of deterioration. Long story short, salt is bad news for rebar. Anything by or in the sea, or where road salting is a regular occurrence, requires something extra.

Two solutions revolve around coating rebar with other chemicals. Epoxy-coated rebar was common practice for years, but is being phased out and banned in many areas, such as Quebec; a single nick or cut in the epoxy and the coating, rather than protecting the steel underneath, becomes a moisture trap and actually speeds up its degradation. Enamel coatings are supposedly chemically reactive to the chlorides that assault the steel, suggesting that chipping would be less of an issue. However, Dafydd Downing, site manager, states that the pros are not outweighed by the price, and in the majority of cases the standard black bar remains supreme.

Only in the most extreme environments is rebar eschewed for its more expensive, hardier cousin: Glass Fibre Reinforced Plastic (GFRP) rebar. This product is touted by its producers to last a hundred years, an apparent four-fold lifespan compared to standard rebar. This is only required in places like heavily-salted, rural Canadian bridges and nuclear reactors, where the builders are hoping not to have to set foot again in their lifetimes.

The Afterlife of Rebar

When a building reaches the end of its useful life and the demolition experts are sent in, what becomes of this reinforcing radical? It might comfort you to know that rebar recycling is actually in everyone’s interests. 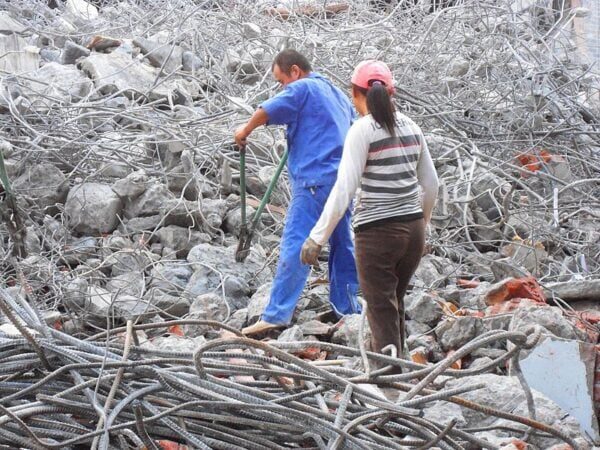 Steel manufacture is an energy-intensive process, especially when making new produce from iron ore. But recycling rebar into new products reduces the energy by anywhere from one-half to two-thirds. And the machines that extract the bones of the buildings are no laughing matter either.

Excavators capable of exerting a thousand tonnes of raw power are able to effectively “eat” reinforced beams and pillars, then “chew” the accumulated mass until it separates out into aggregate and steel. If that isn’t in your budget, or you are operating at a smaller scale, you can use a masonry bit on a power drill to break into a lump of concrete and switch to a rebar bit to cut through individual rebar pieces.

So, there you have it, the barest of introductions to the largely invisible reinforcement that holds up the modern world. The next time you pass by a construction site and see the bare steel bars before they take their place at reinforced concrete’s heart, you might want to give a brief nod to this feat of engineering.