Here’s how we turned groundwater into spray on concrete and rescued 6,400 fish

In the mid-1800s, an unusually hot summer gripped the city of London, and an unusually pungent smell made its way up from the River Thames. Cholera was rife in the city, and many blamed it on the miasma coming from the river.

At the same time, a new invention, the WC, was being rolled out across the city. But the unfortunate knock-on effect of the humble toilet was that it flushed straight into the city’s storm sewers. Those storm sewers had been built to guide rainwater back into the Thames, and once human waste was put into the storm sewers, it also ended up making its way into the river.

The unfortunate chain of events continued as wastewater from breweries and paper mills, refuse from slaughterhouses, and tons of ordinary household waste was being dumped into the river. At the same time, a number of local water companies were drawing water from this same river for Londoners to drink. The contaminated water they were drinking led to the cholera outbreak and what is now known as the Great Stink of 1858.

To solve the problem of the miasma enveloping the city, the Victorian engineer Joseph Bazalgette proposed a network of sewers and embankments that would bring Londoners’ waste away from the city and underground. The 318 million bricks used to construct the 1,100 miles of underground sewers used for rainwater and sewage are still in good condition and will continue to be used. The £4.2m (now equivalent to £4b) project was an enormous success and over the next 150 years London would continue to grow and make use of this clever system.

But today, sewage discharges to river occur because Bazalgette’s sewers can’t cope with the combination of rainwater and waste being produced in the city, hence why London’s sewers are getting an upgrade in the form of the Tideway project.

The Tideway Project will have a massive environmental benefit and will leave a lasting legacy in London. On such a large project there are many engineering challenges, but a focus on sustainability and environmental issues are key to making the project a success. Take for example groundwater.

Where does all the groundwater go?

Groundwater is little pockets of water beneath the surface of the ground which soaks into our aquifers (underground layers of rock or unconsolidated materials) found underground across the city, and the quality of London’s groundwater varies dramatically. 30% of drinking water in London comes from groundwater extracted from springs, wells and boreholes. Groundwater largely consists of rain that has seeped down through the soil. In other instances, the groundwater has been contaminated by old industry. The Tideway site at Falconbrook Pumping Station, for example, used to have an old laundry located close by, and there was evidence of chlorinated solvents (which are known to be used in dry cleaning solvents and degreasers) flowing through the groundwater there.

The groundwater at Falconbrook Pumping Station was found to have chlorinated solvents after the FLO (Ferrovial Construction and Laing O’Rourke Joint Venture) team began testing and measuring groundwater across the Tideway Central network. To do this, FLO have installed monitoring boreholes at different depths to ensure monitoring of groundwater within different geologies is monitored. There are a number of boreholes across the sites, which all pose a significant risk as they could easily become pathways to pollution of local drinking water if not managed well. The FLO Environment Leads work within the site teams to ensure boreholes are protected and all potential sources of pollution (e.g. fuel bowsers, diesel plant) are suitably protected and placed at a suitable distance from the boreholes where practicable.

In order for the teams working underground to work in a dry environment, these pockets of groundwater sometimes need to be pumped, and before this can occur, testing needs to be done on the groundwater to figure out the best way to dispose of it.

When water is pumped out of the working area, it is brought to a treatment tank, treated and then discharged. On some sites where the groundwater quality is suitable, permits and approvals have been sought from the Regulators to allow the water to be discharged to the River Thames and ongoing testing is conducted to ensure the quality falls within permit thresholds. On other sites trade effluent consents are sought and groundwater is discharged to the sewer at specific discharge locations.

If the groundwater that is pumped out of the ground using these dewatering wells is neither contaminated nor fit for drinking, the water can be discharged back into the river (a process that is closely monitored and must be pre-approved). The question that Justin Feltham, a FLO Environment Lead, asked was whether this water could be put to better use.

A member of the FLO Environmental Team based at the Blackfriars Bridge Foreshore site had an award-winning idea to reuse the dewatering groundwater in construction works. He went about researching the possibility of using the water in the spray concrete lining mix that was to be used to line the site’s shaft. This would mean that instead of using fresh water from a tap on-site, the team would re-use the groundwater that would have otherwise been discharged safely into the river.

One not familiar with the environmental regulations would think that this task would be a simple one, but it was no such thing. After a number of months of research and testing, the sustainability innovation was finally given the go-ahead as a viable option by the Regulators, such as the Environmental Agency. This success has led to many positive sustainability aspects; reuse of the groundwater, diversion from the river, saving of fresh water (which in London is a valuable resource) which all lead to savings in costs and indirectly carbon.

Are there even any fish in the Thames?

Groundwater isn’t the only water that sometimes needs to be drained. To be able to work in the middle of the river, the team also had to construct something called a cofferdam. Simply put, these cofferdams are four steel walls dropped into the river, sealed, and then drained of water.

But as with any river, there are thousands of fish in that water, and if you install a cofferdam, the fish between the four walls become trapped. Instead of seeing this as a nuisance, the FLO team saw it as an opportunity. They brought in a group of specialist ecologists who had the opportunity to catch, identify, log and return to the river any fish that were trapped inside the cofferdam.

The thing about the Thames is that not many people know exactly what species of fish are in there. In Victorian times it’s thought that very little would have survived, but as the river has gotten progressively cleaner, certain species have been returning. In the 1950’s, the Thames was declared biologically dead, but a number of initiatives have attempted to clean up the river since then, the Tideway project being one of them. So, the draining of the cofferdams was an ideal opportunity to see what exactly was swimming around inside the Thames.

Over the course of the project so far over 6,400 fish have been rescued from the cofferdams. Of these 6,400 fish there were even some species that the ecologists thought no longer existed in the Thames; evidence that the river is already getting cleaner.

Creating a cleaner river is the main goal of the Tideway project, and identifying the biodiversity of the river now gives ecologists of the future a reference point to track progress. This initiative was recognized by The Green Organisation and the teams involved were awarded a Green Apple Award. 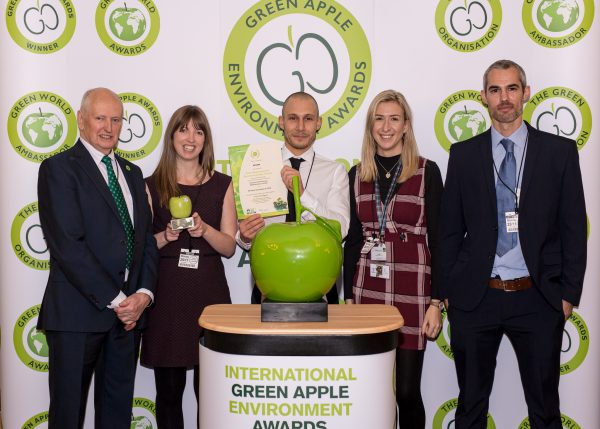 Just two of many sustainability initiatives

The initiatives mentioned in this article are just two of many being implemented across the tideway project. Just from the central main tunnel drive 1.83 million tonnes of excavated material was transported via the river for beneficial reuse, taking an estimated 94,000 HGV trips off London’s roads. In addition to this all eight Tideway Central sites’ tunnels and shafts excavated material is being sent, mostly via river, for beneficial reuse. Community liaison teams have been set up to be as transparent as possible with neighbors. The Environmental and Noise teams work closely with the local councils about the work being carried out, a great focus is given to best practices to minimize air quality and noise emissions. Many sites have been sharing surplus materials thanks to better communication using social media apps between Construction Managers, Site Foreman and the Environmental Team. FLO have opted for electric cranes and plant on some sites, opposed to diesel more GHG emitting alternatives. Ferrovial has even helped suppliers become sustainably certified and only procure responsibly sourced; timber, concrete, steel and aggregates in permanent and temporary works. The list continues.

These initiatives are all part of a drive towards a more environmentally friendly and sustainable project site, something that Ferrovial has already committed to by signing up to the United Nations Sustainable Development Goals (SDGs).