B for Bauhaus and Balenciaga: How to transform society through shapes

In 1919, a design school was opened in Weimar (Germany) that would break from the entire Western architectural tradition. Think of facades decorated with scrolls, moldings, and cornices; now, think about the buildings designed by famous architects like Frank Lloyd Wright, Le Corbusier, and Mies Van Der Roche. This aesthetic and conceptual shift took place thanks to the Bauhaus, which laid the foundations of architecture and design in the 20th and 21st centuries.

Despite the fact that its first director, Walter Gropius, was an architect by training, the Bauhaus school opened its doors as a school of design, not architecture. Its manifesto even advanced the premise of serving as a space for cooperation between the different artistic disciplines (sculpture, painting, architecture, etc.) for the sake of one common goal: building the future to transform people’s lives.

These ideas were put forward by Gropius as the result of his particular vision of art as a social element. They can be considered the bedrock of our current way of life. This movement extended not only to architecture and engineering but to all types of utensils in accordance with Gropius’s idea of comprehensive design. Above all else, it sought to prioritize an object’s function over its form, eliminating any decorative features. The depth of this aesthetic shift was of such a magnitude that Bauhaus creations continue to impress and captivate our sensibilities with their modern, avant-garde style.

Bauhaus similarities between Balenciaga and architecture

While no garment has clearly been inspired by a building or vice versa, we can play at relating the trends and forms in fashion that have also been applied in well-known architectural works. The principles of the Bauhaus have become pillars of design and architecture schools. Balenciaga’s designs, as we’ve already mentioned, also reflect these principles in line with the stylistic changes happening in the architecture of that time.

For example, there’s St. Peter’s Church in France, which was designed by Le Corbusier. The first sketches of the church date back to 1961, though its construction did not begin until ten years later. The most striking thing about this building is the conical concrete body, which is reminiscent of the wedding dress designed by Balenciaga in 1967 made of silk gazar with a single seam. It is undoubtedly one of the most groundbreaking bridal designs in the history of fashion, which was likely also influenced by the austerity of the religious order’s clothes. 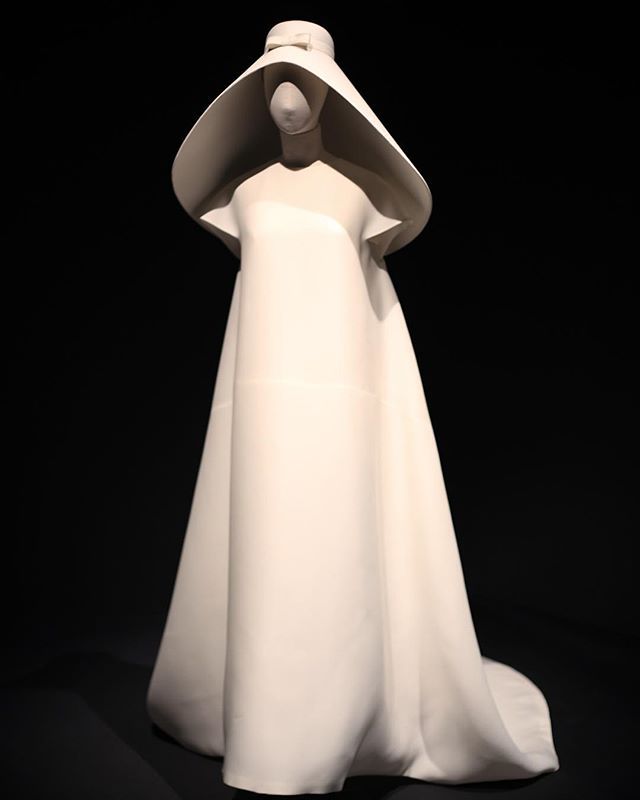 Another example of shapes could be the coat that Irving Peen portrayed in Lisa Fonssagrives in 1950. The sleeves of that coat are reminiscent of overlapping shells that we can find in many other architectural examples, such as the Sydney Opera House, designed by Danish architect Jørn Utzon in 1957.

Let’s turn our attention to how this idea of clean design appears in the work of the haute couture master Cristóbal Balenciaga. After World War II, the New Look by Christian Dior was a fashion designed to accentuate the female silhouette: wasp waists and wide midi skirts made of tulle were a sort of return to the corset that Chanel fought so hard to do away with.

Balenciaga, on the other hand, opted for designs that allowed free, natural movement, always thinking about the user’s comfort. This is clearly akin to the primacy of functionality in the Bauhaus school of thought. In 1947, the Basque couturier presented the barrel line or tonneau, his first concept, which fully frees the waist. Later on, Balenciaga would experiment with the volume of garments, playing with space between the garments and the body, giving his designs an almost architectural or sculptural character. All this would lead him to create pieces that, due to the simplicity and timelessness of their shapes, are still seen today: the baby doll dress, the balloon sleeve, and the peacock tail.

For a very specific period, Deesburg and Mondrian directed the Bauhaus school, using only three basic shapes to develop all the designs the school produced: the circle, square, and triangle. In the same way, Balenciaga created his designs based on cylindrical and spherical patterns, free of ornamentation and highlighting the purity of the lines. He never stopped exploring the possibilities of shapes, space, and materials until closing his workshop in 1968. He always prioritized the comfort of customers and free movement in the garments.

Echoes of Balenciaga’s through the history of fashion and design

The austerity, innovation, and perfection of his garments have made many of their designs true icons, and they have opened the door for great designers to work with these ideas of volume and space. This is the case of Hubert de Givenchy, who referred to him as the “architect of haute couture,” and Azzedine Alaïa, who had a recent exhibition at the Balenciaga Museum in Guetaria about his relationship with the maestro.

It is beyond question that, in this meticulous work of investigating space, Balenciaga created a set of silhouettes that would not only define the 60s but are still so present that they often appear in stores and magazines. This work was also carried out by architects of the German school with such success that these designs are still timely for us today. Two forces that completely transformed society’s taste and made way for a new aesthetic.