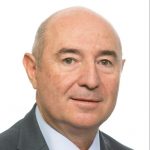 He is a Civil Engineer from the Technical University of Madrid, and he began his career at Agroman Empresa Constructora in December 1980. His professional career spanned different areas of the production line: he worked as a site manager and team leader in Santander, a delegate in the Railway Division in Madrid, and later in Civil Works Management for the Central Region. He has been Head of Bid Analysis at Agroman since 1991, and since 2007, he has been the Director of New Accounts for Spain at Ferrovial Construcción (formerly Ferrovial Agroman), also covering Latin America, France, and Portugal since 2011.