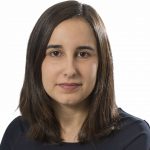 María Clemente is V.P. Finance and HR at Great Hall Partners since 2017.María began her career in 2009 at Heathrow where she performed various roles during five years until she became Operations Financial Analyst. From 2013 to 2015 María continued developing her career as Financial Analyst at Ferrovial Airports in Madrid where she supported the financial and accounting management of the division. In 2015 she moved to Glasgow to work as Financial Analyst for AGS Airports Limited the last two years.