Tunja Bayacá, Colombian natives José Luis and Miguel began their career in the arts from an early age. Attracted by an innocent luring towards action figures, comic strips and animated films, they went astray in the multidisciplinary tasks of the creation of universes; drawing of characters, writing of scripts and performing the soundtracks for the tricks of their minds. 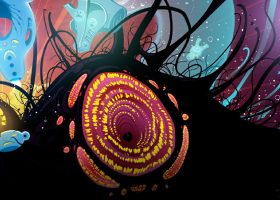