Never speak in public without first doing these 10 things.

What do a TED talk, a work meeting and a biannual meeting with your neighborhood community have in common? Well, in all three situations it is vital that you’re aware of how to speak in public. It is an opportunity to make a mark, to impress, and to transmit to your audience the message that you wanted to convey. So do your research, prepare well, dress smartly and dazzle your audience with these 10 essential tips on public speaking.

1. Is your heart beating fast? Are you sweating? Can’t breathe properly? Excellent!

That’s just what you need. Now take advantage of it all. We usually take these physical symptoms to mean that we don’t cope well under pressure, whereas in fact what they really mean is that our body is getting ready and energised for the challenge. A study carried out by Harvard University taught participants to rethink stress as something positive: by beating faster, the heart is getting ready for action; and by breathing more deeply, we get more oxygen to the brain. Participants who were able to think of stress as an aid to performance were less nervous and more sure of themselves.

2. What do you want your audience to do?

What you do with your body determines your attitude. Your body language not only changes how others perceive you: it also completely changes your body chemistry, and therefore the way you feel and what you do. A recent study has shown that adopting a power pose (see picture) for only two minutes increases the testosterone levels (that’s the male sex hormone, which induces risk and adventure) in our bodies and lowers cortisol levels (the stress hormone). So, before you give a talk, and also while you are speaking, adopt a power pose to help you feel more confident and increase your chances of success. 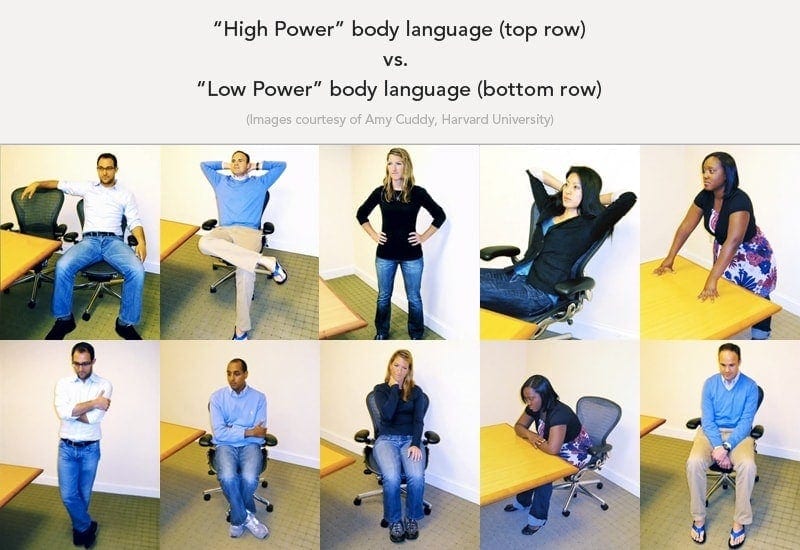 4. Don’t worry that they might remember how badly you performed

Come on. We all have far more important things to do than think about that old bore who came to give us a talk. They won’t remember how badly you performed (unless you fall and break your head), rather they will just erase you from memory. That’s the most that can happen.

5. Do all your thinking at home

Never, ever, think on stage. Because if you do, you will become blocked. All possible contingencies must be foreseen. Before a performance, the conductor fine tunes every instrument, every sound, every player, until everything is perfect. Napoleon said: Everyone thinks I think quickly. But they are wrong. I always think in advance. (“Take time to deliberate, but when the time for action has arrived, stop thinking and go in”.) And yes, this means more work, but your performance will be infinitely better.

6. Check out the venue beforehand

Think of a surgeon in an operating theatre, with the patient already lying on the operating table under anaesthesia. Imagine what would happen if the surgeon had never been there before, didn’t know where all the equipment and the instruments were, or what resources he had access to. If you don’t know where it is you will be speaking, if you don’t know where you have to look, what you are going to find, or how you will feel once you are there, you will need to find all this out as you are talking. And this will necessarily detract from your performance.

It’s not a question of spouting out everything you know, of churning out reams of information. Yes, we all know how clever you are. But speaking in public is not about sounding like an encyclopaedia, rather it is about saying as much as the audience is able to take in. And your audience – if you really succeed in grabbing their attention – can only retain some two or three ideas in the space of half an hour. So focus your speech on at most two or three basic issues, and make your talk revolve around those. Otherwise, the chances are that the audience will only recall unimportant details.

8. Only say that which will make your audience better

Put yourself in the shoes of those listening to you. Imagine that you are the one sitting there in the audience. Oh no, not another boring guy talking and me having to listen. Or isn’t that what you often think? But you can change this negative attitude right at the start by focusing on this basic question: what does the public have to gain from what I tell them? Your talk has to add to what they already know, to what they do or what they feel. If you can give them that added something, you’ve made it. Because you will have been useful to those who were listening to you. And they will remember you.

9. Read up on your subject

Yes, we know you’re very clever, we’ve already said this before. But never ever argue anything that you aren’t able to defend for hours on end. However short your story, you need to know loads, loads, loads… and more.

No, not to impress (though that might be a pleasing collateral effect). Dress up in order to perform better. As with body pose, the clothes we wear (i.e. whether we feel comfortable with what we are wearing) will give us confidence. So put on your battledress and go conquer the world!