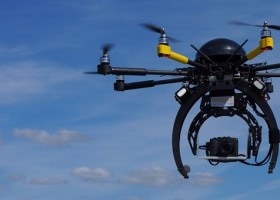 This new technology has revolutionised con...

In less than three years we have gone from knowing next to nothing about drones to being practically swamped by them. Drones are no longer seen as “toys” used for taking photographs, they are professional tools which many companies now use to further their business. And so Xponential 2016, the most important unmanned vehicles fair in the world, was held in Louisiana (USA) from 2 to 5 May 2016. The event was organised by the Association for Unmanned Vehicle Systems International (AUSVI), an organisation that has been going for 44 years. More than 7,500 people attended the fair. It had a highly attractive programme, combining product exhibits, exhibitions, conferences, and a startup competition, amongst others. An exhibition area of over 32,000m2 brought together 650 exhibitors from 55 countries spanning the sea, land and air sectors, meaning that the most sophisticated technology for each of these sectors –for both civilian and military use–, as well as the latest in submarines and terrestrial robots, was on show under one roof. Amongst the local and multinational companies attending from different sectors, those working with drones were in the majority.

Also, despite the fact that “drone” is the word most widely used today, it is not the most accurate. Drones are also known as UAVs (Unmanned Aerial Vehicles), although the internationally accepted term, as recognised by the International Civil Aviation Organisation (ICAO), is RPA (Remotely Piloted Aircraft). All of these terms will be used interchangeably in this article.

The fair provided ample evidence that the unmanned vehicles industry is growing exponentially. The number of exhibitors at last year’s fair was 587; that number has increased by more than 10% in this year’s edition.

Origins of the first unmanned aircraft

The first unmanned aircraft took to the skies at the end of the 19th century, but it is only a few years ago that the sector has experienced a major boost. This is due in part to the improvement in telecommunications and technology, which allows both the size and the cost of microprocessors to be drastically reduced, together with the integration of gyroscopes and miniature inertial sensors.

Why are drones causing a real revolution now?

What are the biggest challenges facing the sector?

The greatest challenge faced today by the sector is achieving greater autonomy or flying time. This requires development of batteries providing high energy density in order to improve the system further. No major technological innovations were evident at the fair in this sense, the most efficient system being Lithium-ion batteries, as shown on the graph. Powering through solar panels could be an efficient alternative if further development takes place, but these were in the minority at the fair.

Moreover, one of the main barriers at present is legislation, which is lagging several steps behind technology. In Spain, the sector is governed by a Royal Decree published on 5th July 2014. It is expected that the Spanish Aviation Safety and Security Agency (AESA) will this year publish regulations which are more in tune with sector needs.

Today, RPAs fly over our cities without us being aware of it. The high quality of the cameras on the drones, together with detection and tracking systems, make it possible to control what goes on everywhere, at any time: this is known as security technology. But is this really a good thing for humanity? Or will there come a time when we are left with no intimacy at all? It is estimated that the production of RPAs will increase enormously over the next decade, thanks to technological evolution.

Can you imagine a city full of drones?

For years now they have been appearing in films (Body of Lies (2008) or Interstellar (2014)). Moreover, the majority of films and series are actually recorded with drones, as these greatly increase possibilities while filming.

There may still be a few years to go before we see UAVs flying over our cities, but the fact is that they are creating a storm in every sector. The leisure industry is quickly adopting their use, and there are numerous country-level competitions with drones, some in which micro-drones go through hoops or door openings at speeds of over 100 km/h. And there are also an increasing number of web pages showing tutorials on how to build your own drone (as, for example, Racing drones).

We can conclude by saying that the development and use of UAVs needs to take ethical issues into account. Irresponsible and uncontrolled use of these aerial vehicles can have negative consequences, but the same can be said of the improper use of any significant technological advance, and they all make our lives easier and richer day by day.