Can you imagine having an airport in the city centre, which you can get to in just a few minutes? And which, instead of endless runways in vast open spaces, is just a skyscraper?

You may need quite a bit of imagination to conjure up the picture in your mind, but the concept of a vertical airport will start to be part of the everyday commercial aviation vocabulary. Arriving in our cities sooner rather than later, it will transform the traditional concept of what an airport is, and how it is structured.

Infrastructure requirements and characteristics of airports have always been linked to the evolution of aviation. In fact, when the first planes took to the skies at the beginning of the 20th century, they needed practically no infrastructure. With time, however, this infrastructure has evolved to adapt to the needs of an ever more interconnected world where flying is commonplace.

The third generation of airports

The third generation of airports, which I am certain we’ll see overtake our current ones within this century, will be closely linked to commercialisation of the so-called TiltRotor – or VTOL  (vertical take-off and landing) – planes, which can take off and land just like helicopters, but attain cruising speeds similar to those of commercial aircraft.

Although this type of aircraft emerged in the 1930s, it is only now in 2016, following decades of tests, that the US Federal Aviation Authority (FAA) has approved certification for the first civilian TiltRotor. In a few years, this type of aircraft will be able to carry up to 150 passengers and travel at twice the cruising speed of today’s helicopters, with the advantage of requiring only a very small landing platform.

In a first stage of commercial development, these aircraft would use currently existing airports. Later on, skyscrapers would be built in the centre of larger cities to incorporate all the functional areas of conventional airports in a much more compact, vertical design.

However, there are other issues surrounding vertical airports that must be taken into account, such as increased risk due to air accidents – which would now potentially impact in city centres –, greater noise levels associated to operation within cities, or the lack of space for future expansion of these new airports.

For now, we can but closely monitor this approaching reality, and look to the skies more than ever. 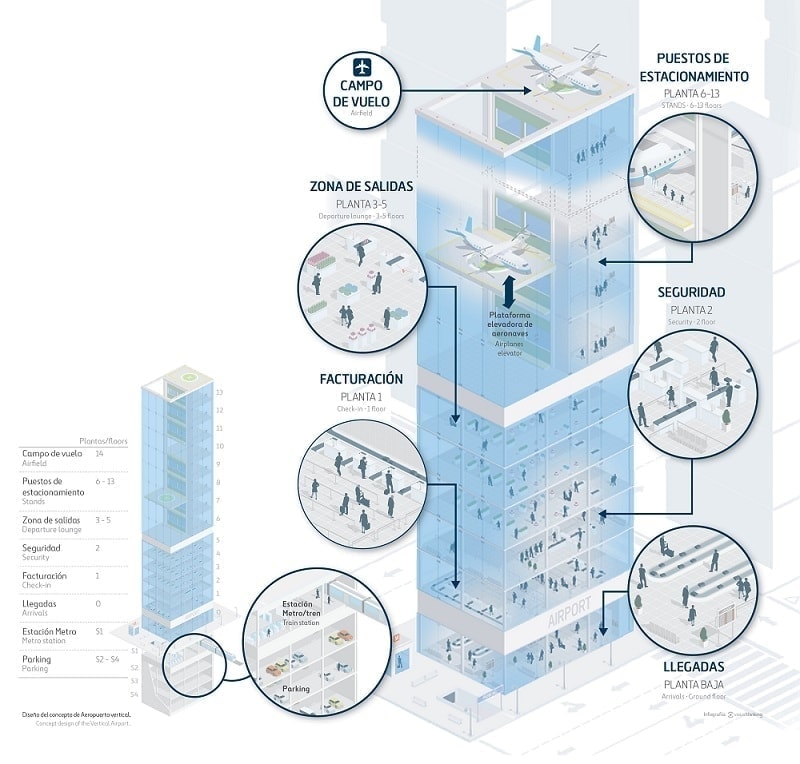