What have ants taught architecture?

An ants’ nest, with its tunnels and underground chambers, can host up to 7 million of these Formicidae. Ants are an excellent example of space optimisation. But they also have a high level of social organisation, learning by observing and eating with other insects, developing and copying ideas which they end up applying to their own working systems.

Everyone is familiar with the typical acrylic plastic terrariums, full of interconnected tunnels on different levels. Ants build sci-fi cities to make the most of their activity. But they always do this based on need: there is no speculation involved, no show home to be visited. The depth to which they tunnel depends on social (the number of worker ants in the colony) and environmental (quality of the soil and suitability) factors. If we compare them in scale to our human buildings, the relative size of ant structures would be comparable to some of Shanghai’s tallest skyscrapers. 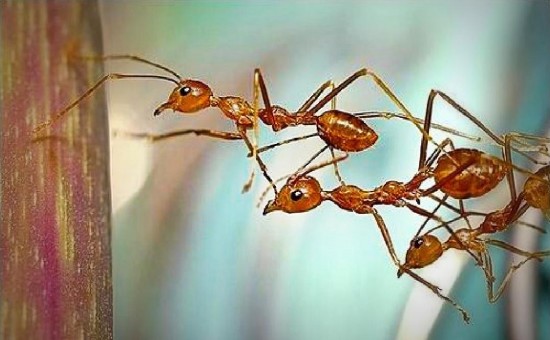 Ants never work on an individual basis, but for the benefit of the whole community. Their collective sense of nest works on several levels; they have no works supervisor, no plans, no manager levels, yet they know what decisions to take for the good of the colony, thanks to a pheromone which adheres to the building materials, helping them organise and not get out of step.

This pheromone stimulates them to build in the same spot, to take the place of their fellow ants and determine the size and shape of the final nest. They use their body size as a template, so that they always know when they need to stop climbing, and when to strengthen the lower levels.

The most impressive ant bridge

One of their greatest achievements is the building of organic bridges. The marabuntas – also referred to as legionary or army ants – use their bodies to link up and create supply routes to apparently inaccessible areas. They can even stick their ends together to create a stronger structure. When this strong link starts to fail and they realise that the sacrifice is greater than the advantage gained, they start to pull apart in reverse order to that in which they linked together.

Our own viaducts are an attempt at copying this behaviour, and the reason why we have stopped using iron for building: the steel and concrete material currently used has a greater elastic limit, just like the organic legs of ants, so that the link structure is more resistant.

Another relevant example are rafts. When flooding occurs, ants will flee in line and build organic “vessels” of up to 100,000 ants linked together via legs and mouth, vessels which can sometimes be the size of a food tray, and which can float for weeks on the current in order to find a new home in which to survive. This networked clump of ants is also water resistant due to the layer of air which forms above the water surface. Their survival instinct is collective and efficient. 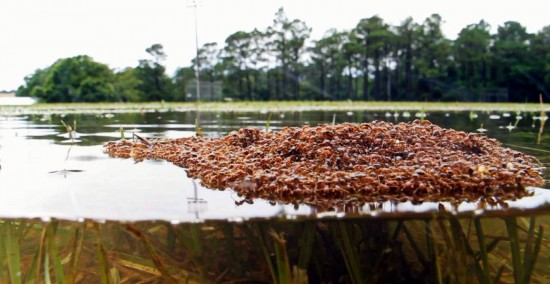 Although the key construction is the tower, the large towers which stick up above the ground are but the tip of the iceberg: they can be up to 3 metres deep. The towers are like a large chimney. They may seem like the only escape route, but in fact they are no more than a ventilation shaft and a means of distribution for the various sublevels. If this exit is blocked, they can create alternative routes based on temperature and humidity. In fact, there is usually a large network of chimneys connecting to one central underground point. Yes, just like community boiler systems.

Please march out in single file

But ants still have a lot more to teach us. Several studies aimed at monitoring their behaviour in a state of panic concluded that when they are “frightened” they quickly look for a means of escape, prioritising corners. Us humans have similar reactions in comparable circumstances. So studying the way they react helps in planning the construction of emergency exits in public places, such as train stations or sports stadiums.

Their sense of “optimisation” is prevalent. For example, when a colony sends out explorer ants to look for food, they establish a perimeter and then move around more or less randomly. When the explorer ants return, the other ants march out to collect the food, refreshing the pheromone trail and creating the shortest, quickest route. At a stroke, they design a four-lane motorway.

Despite all this, our intelligence has made us able to outperform them. Well… intelligence and the use of structural steel, as in the case of the Home Insurance Building; triangulation of structures, as in the Eiffel Tower; and hundreds of innovations in the fields of geometry and engineering. The average height of an adult man is 1.75 metres; that of an adult ant 20 mm. Our tallest building, the Burj Khalifa, reaches a height of 828 metres. That is 473 times the height of a person, compared to 136 times the depth of the deepest tunnels in an ants nest. 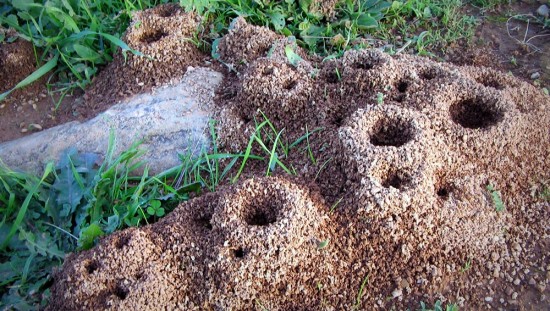 A question of personality

But not all species show the same behaviour. In the same way that architecture is in part defined by the nature of a particular country, red fire ants are more prone to building a jumble of nests, while harvester ants tend to build straight tunnels with large chambers for storing grains. Harvester ants are, of course, weaker and smaller. Australian weavers leave the ground to build their nests in tree leaves, which they drill with their pincers, then roll up and stitch together with silken thread made by their larvae. However, ants living in urban areas close to hard, tarmac surfaces –  therefore easier to destroy – tend to be lazier and neglect their escape routes.

In the same way as our ancestors built their homes with mud or using other locally available materials, ants use whatever they find around them to build their nests. A popular study, led by Argentinean specialist Marcela Cosarinsky, showed that ants do not simply pile up building material, but in fact use a very special assembly process: if they have sand available, they will use only sand, but if they also have clay they will combine both materials to create a porous mixture to optimise work and building times. 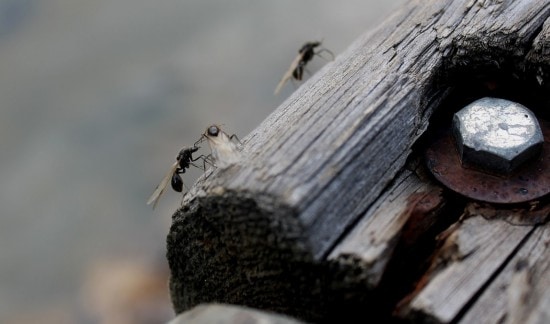 This porous structure simulates our method of building with hollow bricks, but, instead of using rectangular blocks, they create small hollow balls, like ice-cream scoops, handling them and impregnating them with their powerful jaws.

As the bioclimatic sphere from Seville’s Expo 92 reminds us, these balls or spheres aid temperature regulation and eliminate condensation after wet periods, in a manner similar to the ventilation systems in our kitchens, or to hydrostatic balancing valves. There’s no denying it: we have more in common than meets the eye with these small creatures. And we both do our utmost to create the best possible buildings.