You can live with no heating: you just have to know how to get your home organized

When talking about zero consumption housing (Passivhaus / Passive house) or apartments where heating or air condition is not necessary, it seems that we are talking about a utopia. Therefore of an impossibility. But worried as we are about energy loss, we should tend as much as possible to using these designs.

Especially knowing that it is possible to live without heating or air conditioning, even though it is not easy. One of the main keys to achieving this lies in changing the distribution of our home, a decision that can help us greatly reduce our gas and electricity bills.

The importance of location, orientation, surrounding structure and clothing

Using freehand form with no unit denominators in the diagram, you can see the variation of annual outdoor (or daily) temperature in black. 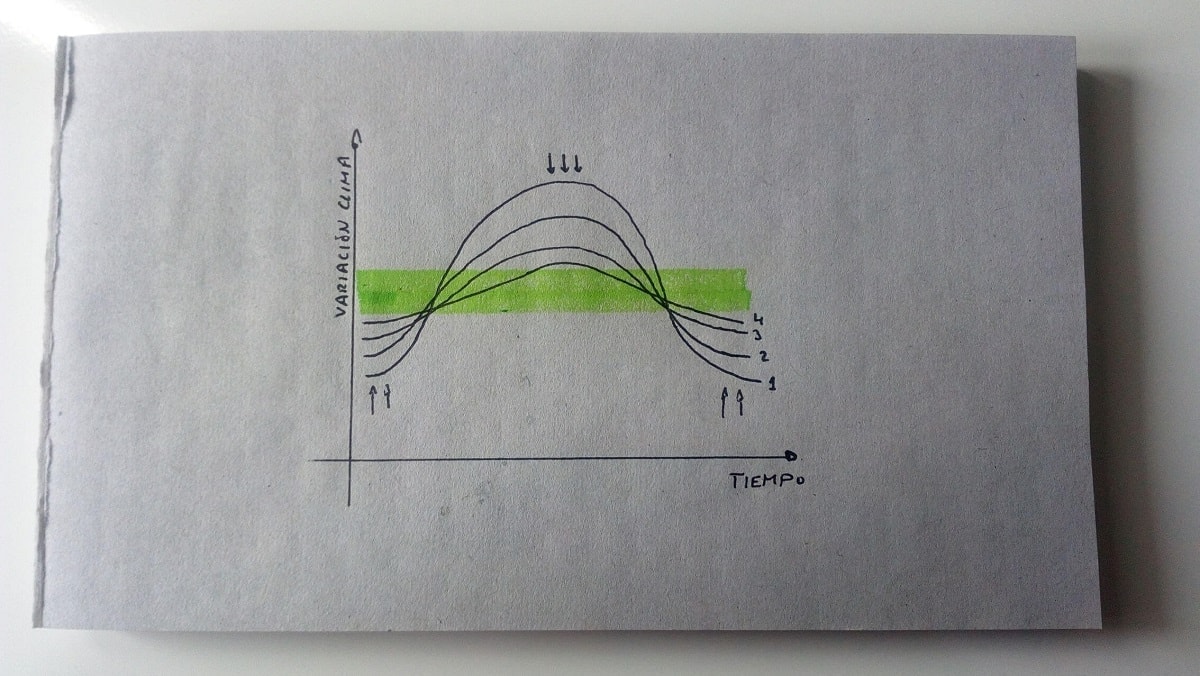 As well as four parameters that attenuate this temperature curve to bring it closer to thermal comfort conditions (in green):

But let’s imagine, just for imagination’s sake, that we cannot change either where our home is located or its orientation. Moreover, we are going to leave the surrounding structure (walls, roof, floors …) and focus on modifying the behaviour inside the house. In particular, its uses.

We all know it is not ideal to do squats when we get cold in winter or to walk around the house naked when we get hot in summer! So we will put our emphasis on the uses of the rooms of the house. And let’s do it by way of example.

Let’s think of a small two bedroom house, and therefore with very little room to manoeuvre in the uses of the rooms. If it can be done with such a limited residence, others should have fewer barriers to transformation.

To make it more graphic, here we have the same house with two possible orientations. Which do you think is more efficient?

Although at first glance they both seem equal in their thermal behaviour the reality is that the house on the left demonstrates almost ideal behaviour. But the one on the right has an absurdly high cost in both heating and air conditioning.

To understand why we have to think about the uses for which each room is intended. As well as in the orientation of each stay. Let’s start with winter – and heating.

We put the heating when we are cold, something unlikely to happen in a bathroom or kitchen. If we spend a lot of time in the kitchen, it is because we are preparing food – often with a fire lit – and in the bathroom we have a hot water shower. In the rooms, even when the air is cold, we can always throw on another blanket and sleep easily. The great expense in heating comes in the rooms in which we spend many hours sitting. 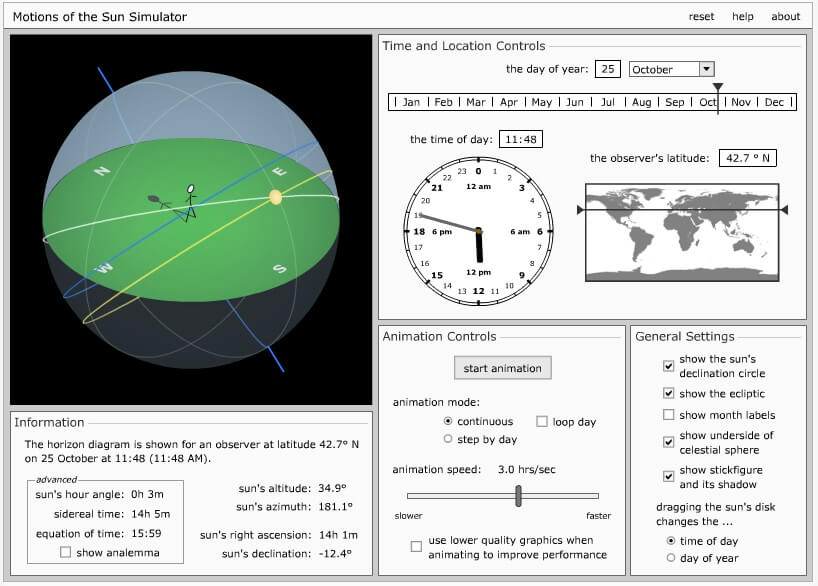 In addition, it can happen that the rooms that open to the south are warmer than those that open to the north. This is because, at least in the northern hemisphere, the Sun has a southeast, south and southwest orientation throughout the day.

Uniting these two concepts of use of space and solar orientation, it seems obvious to orient these rooms towards the south since that’s where we spend the most time. For example, the dining room, the living room, the study, the office, etc.

Returning to the example shown, what happens if we have the house on the right, with the common areas to the north, and we want to save on heating?

One possibility is to put what used to be the living room in the children’s room, putting up a partition to make a room in the northeast corner. The same thing will be useful if, in a house like the one on the left, instead of the children’s room we have a small study. We can move this study to the southwest corner and join the living room with the kitchen both horizontally and vertically.

A change of use give us significant savings in heating.

Minimize use of air conditioning in summer

In summer, these mechanics are reversed, although cold and the heat fight each other in different ways. While the cold is fought by taking advantage of the sun’s heat, the heat tries to dissipate, be minimised or prevented. For example, making use of awnings in the southern facade. 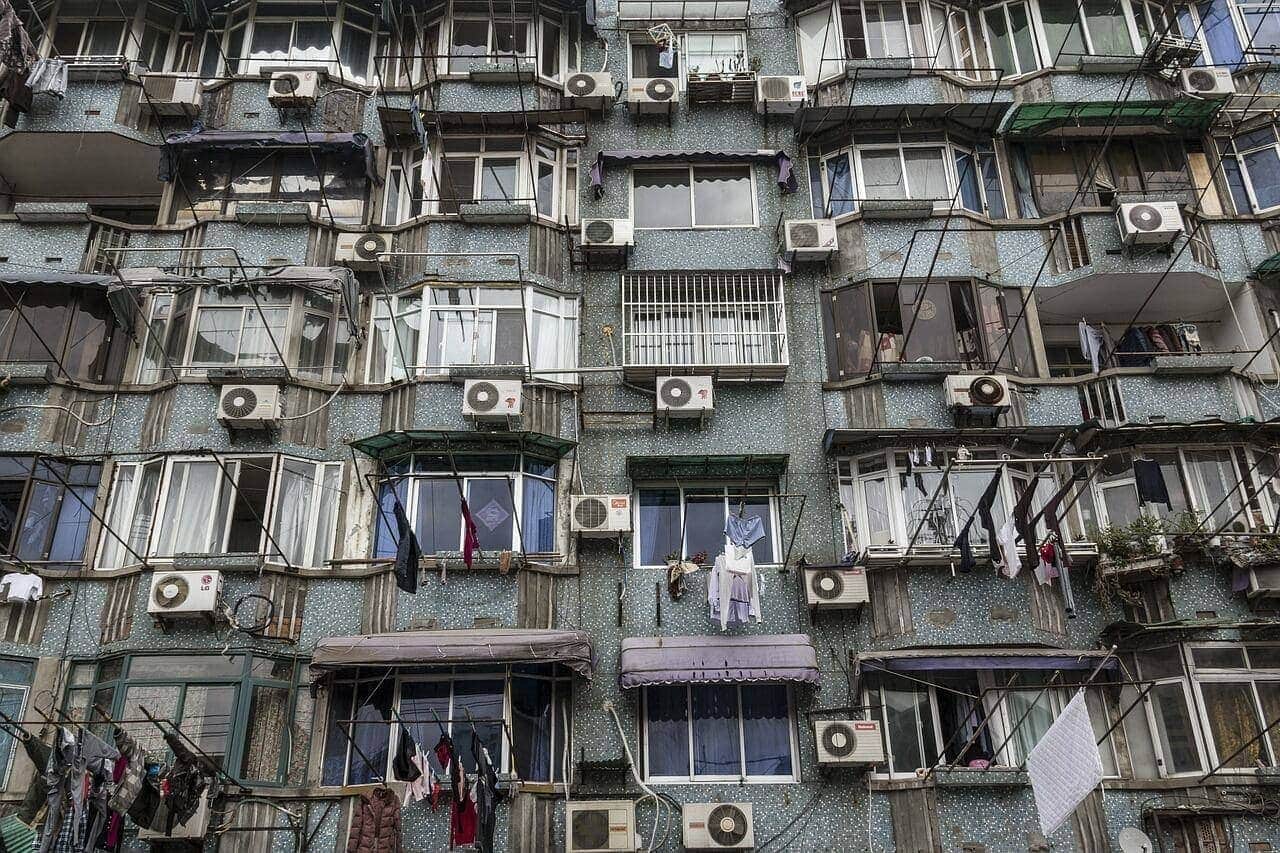 Something as basic as an awning reduces air temperature by a significant factor. Of course, awnings that cover more than the windows are recommended for southern facing façades. We are talking about a sensation of twenty degrees of thermal difference. Seems like a lot? Do a test: I encourage you to walk through a city in Andalusia at two in the afternoon on any day in July or August and then the relief you will feel by just standing under an awning or tree. The simple difference of not receiving direct solar radiation causes the temperature to plummet.

Deciduous trees on the south façade of the building would, of course, be the optimal solution. In winter, the low sun would enter between their leafless branches, reaching the façade and warming it; while in summer the high sun would hit the leafy leaves, preventing it from reaching the façade. A more homemade solution is to place leafy plants in the vicinity of the windows. For example, vines. We have already seen the advantages of using vegetation in urban areas .

A third method in the fight against heat is to increase the volume of air to be heated. This sounds very technical, like you would need to be an engineer to do it! But actually it’s as easy as opening the doors of the house, not the outside ones though. In this way, the volume of air to be heated will be greater and, therefore, the temperature will rise more slowly. If we also have a south façade, this will serve as a cold focal point through which the heat goes.

At the extreme of this last method is cross ventilation that we can generate by opening the windows too. This works very well in a house with windows facing north, since we would open the house to the cold air caused by the building’s own shadow.

The cost in lighting is important

Although for many people it is important to have a well lit home, few take into account the relevance that this has in electric power saving. Let’s think again about our two potential houses. Which will use more energy and have an impact on your electricity bill due to how it is oriented?

Taking into account that the common areas such as living room or dining room are the rooms in which most are usually well lit (for reading, watching television, chatting), these are the rooms that should be south facing. Again, in our example, the house on the left has a good orientation, and the one on the right can be improved greatly.

It is true that we cannot always make the necessary use changes to set, for example, the studio or office on the south side of the house. Rooms like the bathroom or the kitchen are particularly complicated to move (and very expensive).

However, they are factors to consider in new housing or when searching for a rental. Depending on the distribution of the house we could even avoid heating or air conditioning all together. It is worth including this issue in the points that make up our ideal home.

Let’s analyze the uses of our current home to see if we can switch two rooms (dining room and main bedroom, bedroom and study) in order to avoid unnecessary expense. With the consequent environmental impact.