From building bridges to sailing over a desert of ice

This is the only continent with shores bathed by three different oceans. Its surface holds about 70% of all the fresh water on the planet. It has mountains which reach altitudes of 5,000 metres, and nearly 18,000 km of coastline. But Antarctica is, above all, a huge frozen plain. Approximately 98% of its area is covered by a 1,500-metre-thick layer of ice. A frozen desert blasted by polar winds. A sea of ice over which a Spanish expedition on a wind-powered sled will sail in the next Antarctic summer.

Manuel Olivera has been working at Ferrovial Agroman for 24 years, where he is currently responsible for managing and providing advice on the machinery and equipment used in the company’s international construction projects. For many years before this he worked on site, with direct responsibility for projects such as the Uztarreta bridge (in the Basque Country) or  the Barranco de la Batalla viaduct (in Valencia). In a few months he will be one of four members of the first scientific expedition to Antarctica on a wind-powered sled. 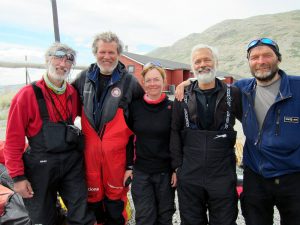 Members of the Circumnavigation of Greenland team aboard a wind-powered sled. On the left, Manuel Olivera.

It will be the third time that Olivera will be at the controls of this unique vehicle, conceived by polar explorer Ramón Larramendi and designed together with Javier de la Puente. Before this, he was part of the first Circumnavigation of Greenland, in 2014, and of the Ice Summit Expedition two years later, also on Greenland. Many years before this, he took part in the 1990-1993 Mapfre Circumpolar Expedition, although not yet with the wind-powered sled.

His friendship with Larramendi began some years back. They both moved in the same circle of friends in Madrid. ‘One day he turned up saying that, in two days’ time, he was leaving for Greenland, but didn’t yet know how he was getting to Denmark. Coincidentally, one of my brothers was visiting because he had just bought a car, an old Renault 4.’ Olivera told him about Larramendi over dinner. ‘That same night they called Ramón up, and off they went to Copenhagen.’

What exactly is a wind-powered sled?

Over the course of polar exploration history, a number of explorers have attempted to cross the huge inner plains of Greenland or Antarctica by harnessing the strong prevailing winds and turning sledges into sailing boats. The wind-powered sled project is the latest expression of this innovation race, combining engineering and the spirit of adventure. It’s the tenth of a series of prototypes, measuring 14 metres by 3 metres and capable of carrying up to two tonnes in weight.

Starting in November, the project will embark on its third campaign in the lands of the South Pole, the first with a marked scientific objective. Work is ongoing against the clock to finish a sled comprising four separate modules. With the engine at the front, connected to kites which will propel it at speeds of up to 60 km/h. There are 20 kites of different sizes, which will be used depending on wind conditions, joined to a series of pulleys at the head of the sled by a line measuring up to 500 metres in length. 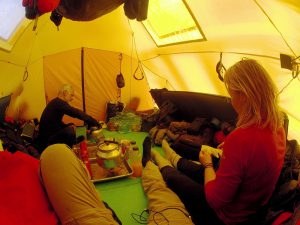 The team has their living quarters in the last of the modules.

Behind the engine are the two load modules carrying scientific and survival equipment. Both are fitted with solar panels and a series of batteries and accumulators. Energy is key for this expedition, and different production and storage options are still being considered. And the last module is the living quarters, including a laboratory, for the four members of the expedition.

‘Increased capacity for producing and storing electricity is one of the greatest challenges. We have worked together with Saft, who supplies batteries to NASA and ESA. We have opted for a modular set-up of optimised lithium batteries. One of the challenges is that they don’t lose charge due to the cold, and so all the batteries will have to be housed within a heated container, so they are not exposed to extreme temperatures’, explains Olivera, who will be in charge of the mission’s documentation work.

All the logistics surrounding the expedition, the customised technology and the sled itself are being funded through a crowdfunding campaign on Verkami, which is already approaching its end. As of now, some 320 people have contributed a total of close to 28,000 Euros, almost enough to cover construction of the sled. 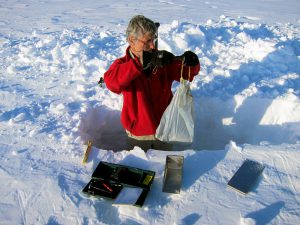 An adventure for science

‘Engineering forces you to be resourceful when solving problems. An engineer is someone who is able to solve an apparently unsolvable problem by thinking it through and relying on knowledge and experience. This is the adventurous side of engineering’. There has always been a fine line between science and exploration. Problem-solving, overcoming barriers and the ultimate quest for knowledge are cross-cutting objectives.

This first scientific expedition to Antarctica for the wind-powered sled obviously has a huge adventure factor. But, above all, its purpose is science. The ultimate objective is proving that the wind-powered sled is a useful scientific tool, as a mobile laboratory on the Antarctic continent, where Spain has no scientific infrastructure of its own (both of its bases are on the South Shetland Islands).

Several projects are currently confirmed for the sled. On board will be an automatic weather station from AEMET (Spain’s Met Office) which will measure, among other things, the speed and direction of polar winds; a muon detection system from the University of Alcalá de Henares; and a sample collection kit from Microairpolar, a project of the Autonomous University of Madrid for identifying microorganisms present in the Antarctic air.

It is also likely that other projects will eventually come on board, from the European Space Agency (ESA) and from scientific institutions in the United States such as Princeton University or the University of Wisconsin-Madison, where the Center for Climatic Research is located. In the past few days, Ramón Larramendi has visited several institutions in the USA, offering them the chance to be present in the expedition. 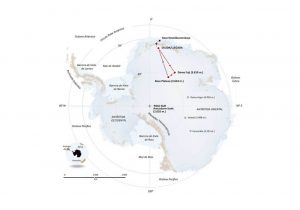 The route to be followed by the sled in its third Antarctic adventure.

Engineering at the service of exploration

Together with Ramón Larramendi, Hilo Moreno and Ignacio Oficialdegui (the other members of the team), Ferrovial engineer Manuel Olivera will travel over 2,000 kilometres of icy plains on the wind-powered sled. The planned route, which is the shortest so far, runs between the Russian base of Novolázarevskaya, the Plateau base and the Fuji dome. Powered only by the wind, previous experience and resourcefulness will be the crew’s greatest allies.

‘For the expedition to be considered a success, all experiments must be successful too, all systems must work continuously, so that when we return and hand them over to the scientists, they will say: perfect, all readings are complete’, says Olivera. And so prove that the sled can indeed be a part of Spain’s Antarctic programme. 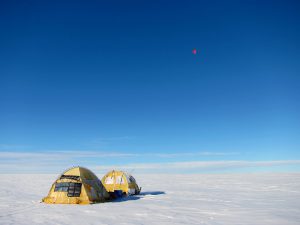 The rest of it all is adventure, exploration and setting foot on the frozen continent. Reaching places where hardly anybody has been before. ‘The feeling of crossing endless plains… of a beauty that is truly humbling. When you look back and see the prints left by the sled, a shiver goes through you. You think of the distance you have travelled, without seeing anyone else. And then your tracks quickly disappear again under the wind and snow’, concludes Manuel Olivera.