Markings on roads and motorways: how they came about

The markings which help vehicles drive in a more orderly manner along streets, motorways and roads are almost as old as the car itself. Rather surprisingly, however – and except for one instance in the 13th century –, the first motor vehicles used streets and roads for decades with no road markings. A century on, the scene is greatly changed and there are markings of all types, colours and meanings, designed with special paints… the result of over one hundred years’ experience from all over the world.

Before the motor car

Although the first road markings in history date back to ancient Rome, such markings were little more than milestones: vertical stones showing destinations and distance. The milliarium aureum marked the centre of Rome, and the milestones or milliaria placed throughout the Empire marked the distance to that point of the capital, in Roman miles. Some of these milliaria soon started to include simple pictograms. But there were no visible markings on the road surface, as travelling was on foot, on horseback or by horse and cart, which did not create too many problems. 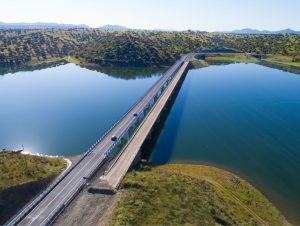 It is not clear whether this is historical fact or a myth, but it is said that the first ever road marking, a continuous central line along the road surface, appeared in Rome on the first Jubilee year (celebrated in 1300 A.D.). The reason was that some 200,000 people gathered there for the occasion, a considerable amount for the roads and tracks of the time. For this reason, Pope Boniface VIII ordered a separation line to be painted down the middle of each road. This was not done in order to separate two directions of travel, but rather to separate the different means of travel: people on foot on one side, horses and carts on the other.

The story goes – although there are numerous different versions – that this could be the indirect origin of why cars drive on the right: it seems that the Pope ordered people to walk on the right and carts on the left, given that many carts were guided by a driver riding on one of the horses, namely the one on the left. But centuries later, it is claimed that Napoleon ordered carts to drive on the right “simply in order to do the opposite of what the Pope wanted”, although it is more likely that this change came about because of the type of cart or carriage used. In England, however, the carriages used made it easier to travel on the left, and this custom extended to the rest of the British Empire and is still the case today in many countries around the world.

With the advent of cars towards the end of the 19th century, cars and carriages (and bicycles) shared roads for decades with no major problems or the need for markings. But the ever-increasing speed at which cars travelled, coupled to the rapidly increasing number of cars and roads – many of which had rather dangerous stretches –, soon made road markings a necessary rather than a convenient feature. 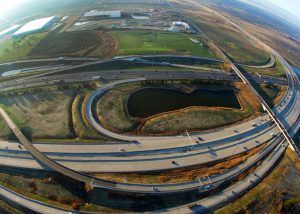 And here history and legend blur together again, although there are some documented cases as to origin. In the United States, the first road on which markings were painted was one in Wayne County, Michigan. The story goes that the person responsible for the maintenance of public roads had the idea for road markings when he saw a milk lorry dripping a trail of milk on the road. It is not clear whether this is actually what happened or whether the story was later embellished, but the fact is that there is documentary evidence of this road with markings on the side at around that time.

Another story claims that in 1912 a Palm Springs doctor called Carroll, fed up of having to travel along dangerous roads to visit his patients, took up a pot of white paint and marked out a line along the middle of the roads he normally used, making it easier to stay on the right side of it. The idea caught on with the locals and started to be replicated elsewhere. 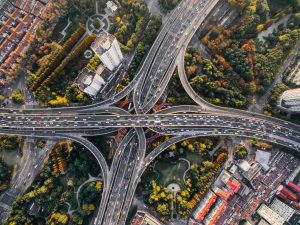 Michigan and California were in fact the first states to make a central dividing line compulsory in 1917 on “main roads” – the motorways and highways of today. There was, however, no consensus as to the colour to be used: white in some places, yellow in others; something that would not become standardised until 1954. In England – another country in which the popularity of the motor car was rapidly increasing–, the first road markings were painted in 1918, with regulations being published in 1926. (In Spain, there was a story in circulation whereby a certain Gómez Ibáñez from Albacete was said to have started to paint lines along the road edges in 1960, although the fact is that there are photographs dating from much earlier already showing lines painted on certain public roads.)

Today, road markings are used on all public roads, be it streets, roads or motorways. And the colours and signs used have evolved over time and become standardised following international regulations, both in appearance and other aspects. Here are some curious details regarding road markings: 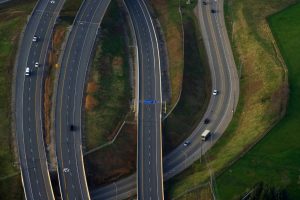 Regarding technology and materials, current road markings are usually reflective to improve visibility. Paint is combined with anti-skid additives (glass beads and aggregates) to enhance the safety of pedestrians and motorcyclists in case of rain or snow. The compounds used have to go through tests for daytime and nigh time visibility under various conditions (rain and fog, for example). They must also undergo “wear simulation”, which recreates vehicle rollover, up to a maximum of 4 million wheel rollovers. If, during regular inspections of a road or motorway, road markings are found to be worn and therefore need repainting, this can either be done by applying a new coat of paint over the old, or by scraping off the old markings and painting completely new ones.