The Denver International Airport −often called DEN− is located in the city of Denver (Colorado), also known as the Mile High City, because its official altitude is exactly one mile (1,609 meters) above sea level. 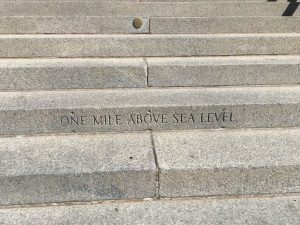 The presence of the famous Rocky Mountains and its more than 300 days of sunshine a year make Denver the perfect destiny for holidays or to live. Denver is also the perfect city for sport lovers, being one of only two cities boasting seven professional sports teams.

DEN opened its doors on February 28, 1995 as a replacement for the former Stapleton Airport, and is known around the world because of the iconic white fabric roof that covers its main terminal, called Jeppesen, in honor of Elrey Jeppesen, an American aviation pioneer with contributions in the field or air navigation and developing manuals that allowed pilots to fly much more safely. 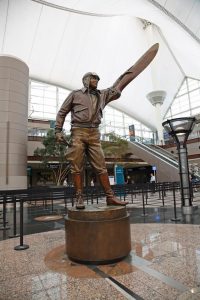 One of the most distinctive features of this airport is its strong commitment to art, hosting more than 40 site-specific works distributed by its terminals, including sculptures and murals, making it one of the most extensive airport exhibitions in the world.

So much so that passengers arriving to the airport through Boulevard Peña will be welcomed by a blue 10-meter-long Mustang horse with red eyes, while if they decide to walk from Jeppesen Terminal to Concourse using the pedestrian bridge, they will hear Native American chants that have been playing non-stop, 24-hours a day since the airport´s opening. 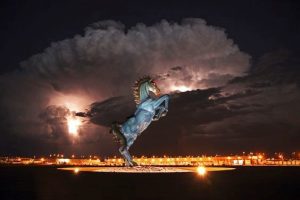 The airport is also known because of different conspiracy theories. In 2016 DEN had a temporary art exhibit named Conspiracy Theories Uncovered, where some of the best-known conspiracies related to the airport industry were shown.

The importance that DIA gives to art is so great that the Great Hall project that Ferrovial is developing in the airport has dedicated a percentage of the total construction value for acquisitions of new art pieces. 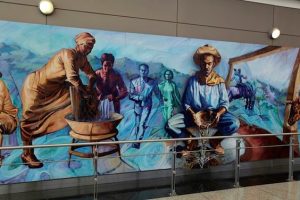 What will make Jeppesen Terminal even more unique?

The Great Hall Partners consortium, led by Ferrovial Airports and also formed by the North American companies Saunders Construction and JLC, has already begun the improvements that are expected to be carried out during the next four years in the Jeppesen Terminal. The project includes the creation of new retail, restaurant and check-in areas, the relocation and extension of security controls, the improvement of access to the building and passenger traffic flows and, finally, the optimization of space and efficiency of the terminal.

Innovation is also a key part of the DNA of the project, which covers an area of more than 70,000 square meters of floor space and which, by 2021, will allow the Denver International Airport to have 176 new check-in desks, 34 new security lines and will twice the commercial spaces. The Great Hall will also offer unique opportunities including an Incubator Unit where start-up companies and small local business will have visibility to all passengers arriving to Denver.

The airport, which has not stopped growing since its opening, registered a record number of visitors in 2017, making it the fifth busiest in the United States, with more than 61 million passengers.

Currently, it has 6 runways, one of which is the longest commercial runway in North America. In terms of extension, the airport is the largest in the country and the second in the world, with a total of 53-square-miles of space (34.000 acres or 137.8 square kilometers). To give you an idea, the airport is more than eleven times the size of Heathrow Airport! 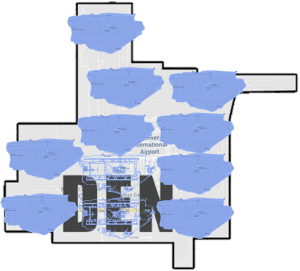 As part of the extension, the airport has 30 acres of parking lots with more than 44,000 parking spaces, approximately 300 lane miles of roads, which is approximately the distance between Boston and Philadelphia or between London and Brussels. In addition, the airport also has one of the largest jet fuel distribution networks in the world and around 470,000 square feet of underground space. 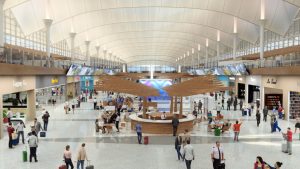 Now that you know what makes DEN a different airport, do not hesitate to discover it during your next visit to the United States!