Pavement and the environment or recycling, yes and no. First, long-lasting pavement!

Being a little critical from my point of view, we sometimes talk about recycling when the major solution is before that, as may generally be the case. Why do I say that? Generally, as applies for many sectors, a large part of the solution is at the beginning. The first thing we have to do is make things last longer and try to avoid this general disposable culture.

I saw this clearly a few years ago. I was at a conference explaining the various techniques for recycling pavement, and someone in the room raised their hand and said, “That isn’t what’s important, the key is long-lasting pavement.” And I admitted that they were right. So often, we worry about putting a band-aid on things, and what we have to do is avoid getting injured.

And now in focusing on pavement, there are 3 things that must be done. First, they should be long-lasting or of maximum duration. Second, reusing, which is not the same as recycling; when I say reusing, it is using a product again for the purpose it was designed for. And third, we can recycle, which would be using products for different purposes that still provide additional value.

On the third point, there is something I want to stress. The road cannot take just anything due to excessive recycling zeal. On roads, we can use recycled elements that add value, but we are going against the first point, and the outcome is contrary to what we are after.

Ultimately, it is about analyzing the situation as a whole and not just from one perspective. So you can see that, from the day long-lasting pavements were mentioned, we started a line of work at Ferrovial to get road surfaces that have a longer life.

Many things affect pavement, but we can just about sum them up with a kitchen metaphor: ingredients and how we cook them. In our case, the sand, gravel, and asphalt tar are the ingredients, and how they are made, spread, and condense are how we cook them. Like Ditecpesa, Asphalt Products is a company focused on tar. We have been studying how to improve them, and the objective fact is that we have managed the ingredient better, at a Michelin star level. 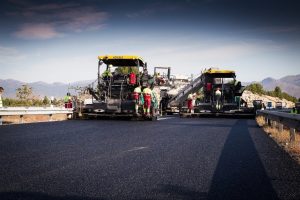 Since the summer of 2016, we have been working to improve asphalt tar in properties beyond specifications, which have resulted in better road surface performance.

Together with the service division of Ferrovial, we have developed a new road surface for use on highways that has successfully passed more than a year of tests on the Aragon highway. 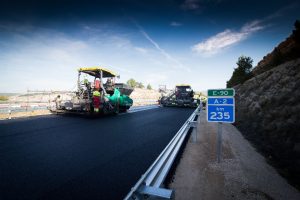 After a year in operation, this new road surface has surpassed the mechanical properties of the previous mixture and its water resistance, as well as its winter resistance under the effects of salt. Moreover, the values obtained from the transverse friction coefficient are higher, thereby improving the safety of drivers that use the A2 on the stretch mentioned. 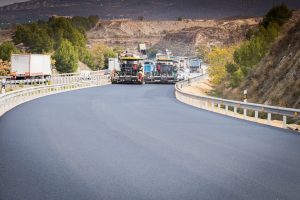 And as we can see, innovation has forked out like tree branches. We started the work so that the road surface could last longer. As the quality has improved through the asphalt binder – long life bitumen –mechanical properties have improved, facing attacks from water and winter treatments with salt. Additionally, the grip of the road surface with the tire is greater due to the transverse friction coefficient’s prolonged maintenance.

And once the pavement’s life is over, what we will do is go to the second point, reusing, that is, extracting the pavement and applying it again through a process of updating. In the best-case scenario, nothing goes to the landfill. I have to say that pavement can be reused n times, so in some ways it is immortal. And once all this has been done, the third point, improving the road surface with plastics, recycled tires, etc… as we showed in the post from 2016.

We can conclude with a paradox, and that is that the best circular economy would be the one that had the smallest flow/circle or least intensity, and for that we would have to apply the best technologies at the origin, where we would have to put the same amount or more of energy in order to close the circle.