From a prehistoric pavement to smart pavement: the curious history of improving on asphalt

Along 1,600 kilometers, between southern Turkey and northwest Iran, through Turkish and Iraqi Kurdistan, rise the Zagros. No one would say that the towns that dot this isolated mountain chain have anything to do with the large highways linking the planet. And yet, in some sense, they do. The Zagros leg was key in the Silk Road, the first large commercial route in history. Some of the oldest signs of asphalt used by human beings have also been found there.

Tar, today indispensable for paving roads, has accompanied humankind for millennia. Its first uses are a far cry from the current ones, but they explain the physical properties of this substance that have led it to conquer the planet. Let’s start at the beginning, with the many indications that the populations of the Zagros, where asphalt is naturally abundant, used it daily and traded with it.

An old adhesive with various properties

“Tar was already widely used in Mesopotamia [modern-day Syria and Iraq] as mortar in constructing palaces, temples, ziggurats, and terraces,” maintains J. Connan in their paper, ‘Use and trade of bitumen in antiquity and prehistory: molecular archaeology reveals secrets of past civilizations’. “Since the Neolithic, tar served to make containers (baskets or clay vessels), wooden posts, palace floors, water reserves, bathrooms, and roofs impermeable. Sarcophagi and coffins used for funerary purposes were often covered and sealed with tar.”

In fact, in 1998, in the El Known site in Syria, evidence was found to suggest that prehistoric populations from 40,000 years ago may have used tar to fix tools and as an adhesive. And it is in this form of sticky, black, highly viscous petroleum that it has a set of properties that make it as interesting today as thousands of years ago. 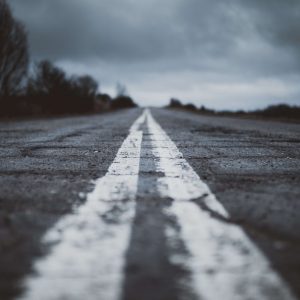 Asphalt has been used without interruption up until present day, above all by those groups that had Access to a natural source of tar. However, its relationship with roads got off to a slow start. Neither the famous Roman roads nor the first paved roads in the Modern Age had heard of asphalt. At the end of the 18th century in France, it began to be used to make cobblestones that were used on some roadways (Paris-Perpignan is one of the first where its use is documented).

As the world population grew, the use, wear, and pressure on communication routes grew as well. In large cities, something more than muddy roads was needed. Paris, London, and Washington were the first capitals with asphalt roads. At the end of the 19th century, all the great American cities were filled with tar (mixed with other materials).

Today, more than 90% of asphalt that is used on roads is made with sand and gravel, and around 5% is tar. Its uses have changed and more than 85% of global asphalt production is used to pave highways, roads, and streets, according to data from the European Asphalt Pavement Association.

Between Europe and the United States, there are more than 8,000 asphalt production plants that turn out more than 600 million tons per year. Today, several types of materials are produced depending on their uses, its recycling has improved, and its production is more efficient. But its future could still offer us something very different.

Smart pavement for the future

The patterns of communication and movement changed in the 19th century with the growth of cities and in the 20th with the arrival (and rapid expansion) of the automobile. In the 21st, we are becoming immersed in a phase of mobility revolution, looking for solutions to traffic and pollution of our urban centers and with our sights set on the horizon of the self-driving car. 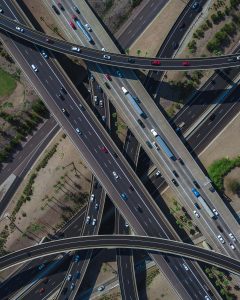 Self-driving vehicles promise to solve the big challenges for current mobility. And pavement has to be up to the task. “We will have to have some levels of surface regularity and transverse friction coefficients that are always at optimal levels, signage horizontally as vertically with signs and porticos in perfect condition. Moreover, these new roadways will have to be sensorized with extra elements to ensure the safety of the self-driving vehicle, and therefore be in good working condition,” explains Jose Javier García Pardenilla, manager of Ditecpesa, a Ferrovial company, in this article.

What’s more, asphalt that repairs itself has been developed in the last few years, such as the Technological University of Delft or the TRAINER project, asphalt equipped to wirelessly recharge the batteries of electric cars or asphalt capable of absorbing some of the pollution that vehicles produce. This is smart asphalt that paves the mobility revolution.

The tar in the Zagros mountains is a quickly fading memory. The first asphalt streets, a historic anecdote. But it is worth it to remember how a material that served as a way to fix prehistoric tools has conquered the planet alongside roads.