“Smart pavement” installed by connecting prefabricated blocks has sensors for detecting vehicular traffic and communications in order to interact with control centers and emergency centers.

Since last August, technical engineers from Integrated Roadways have been testing their smart pavement in a real-world environment in Denver, Colorado (United States). The tests were on streets in an industrial zone where there is a Pepsi Co. bottling plant and a few parking lots. The tests consisted of replacing the original pavement with the new one, equipped with sensors to detect passing vehicles. These real-world tests, which are especially valuable because they complement “closed circuit” tests, will continue in 2019 with the installation of more than 500 meters that will replace the original asphalt on Highway 285 to the south of the city.

Integrated Roadways’ smart pavement takes the shape of large rectangular pieces that connect modularly, almost like the pieces of a puzzle. It is precast concrete with a lifespan four times that of traditional asphalt, but it is also cheaper (taking manufacturing as well as upkeep and other factors into account; more details about this at the end). In a way, they explain, it is a sort of “upgradeable pavement” because, if new tech systems need to be added in the future, this can be done without having to install them again: they just have to be opened, updated, and closed. 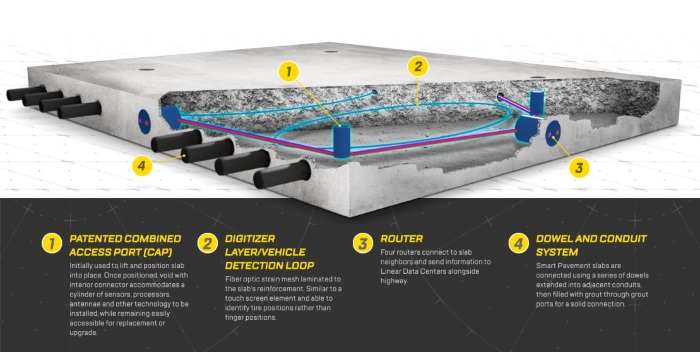 Each prefabricated block basically has four components. The first is called an access port, which is used to raise and lower the pavement block during its installation and later to access the devices inside; they are a sort of hollow cylinder were sensors and processors are installed. The second is a fiber loop, which functions as a “pressure sensor” that detects when a vehicle passes over it; it can be thought of as the physical equivalent of touchscreens on mobile phones. The third are called routers. There are four in all, and they connect each piece with the four adjacent ones, as well as exterior communications systems.  And finally, a series of dowels and conduits where cement is injected so that the blocks fit together seamlessly.

All the smart pavement blocks are interconnected physically, as well as at the level of communications. The sensors detect passing vehicles – more specifically, their position, weight, and speed – and they send that information in real time to processers that store it. An interesting thing is that this works without the car needing any particular standardized or technological component: it works the same for any object moving across the pavement’s surface. In the future, other devices for communicating with vehicles could be installed in pavement, which would be particularly useful if they are self-driving.

All of the information about traffic moves through blocks along the highway until reaching a pull box, which is connected to what is called the Fiber Hut, basically a place where all the information can be processed at a higher capacity and sent to communications towers, either wirelessly or by optic fiber. From there, the information can be transmitted to traffic operation centers, emergency notification centers, and more, so that it can be analyzed with the most appropriate tools for each purpose: managing traffic, acting in the event of problems, or providing certain services.

A new business based on new technology

But not everything is so simple: cost estimations must consider factors like having to negotiate with private telecommunication companies, to whom highway pavement can be offered as a place to install 5G communications sets and more, and on whom connecting sensors to a control center also depends.

It must also be considered that, since it is a more “high-tech” solution than conventional pavement for cutting costs, a large to-scale economy will be necessary. It is not usually easy to enter into an already-existent market like this one. There are also some questions that would require examining the case of a global rollout, as well as its durability in different scenarios so that the joints between the blocks would not pose a problem in adverse climates, etc.

In regard to this aspect of the business, Integrated Roadways is proposing ideas on a large number of services that they could offer to (and charge) vehicles travelling on highways in the form of apps, subscriptions, and more. This is not something that is yet developed, and it could be imagined as an offer of “a la carte services” adapted to the exact place where vehicles are (eating establishments, parking) as well as all along their routes (entertainment, electric charging, etc.). And without a doubt, pavement itself becoming “smart” opens up a new world of possibilities.