Is ‘recycling’ a word that applies to airports? 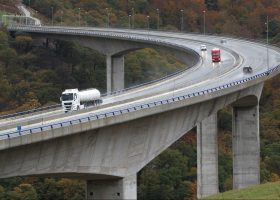 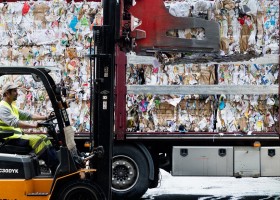 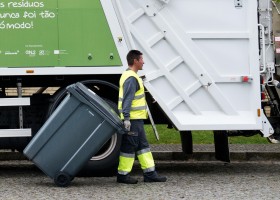 Recycling has become an increasingly popular concept in our daily lives. We are surrounded by news items, ideas, laws and initiatives that make us more aware of the importance of recycling in a 7.7 billion-human-world, where resources are scarce and the environment is fragile.

But what about recycling at airports? Everyone is rushing to get through the security checkpoint, find boarding passes, kids running around, the phone ringing… so what do we do with our plastics? Most of them are simply discarded before going through security.

There were 4343 million passengers in 2018, almost double the figure in 2008 of 2489 million travellers. Do we have an impact as passengers? Let’s get into the numbers!

Each person in this world generates an average of 1.2 kg (2.5 lbs) of waste per day. A day has 24 hours, and a passenger spends an average of 133 minutes (slightly over 2 hours) in an airport, from arrival until the aircraft doors are closed. So how much waste do you think a passenger produces on average in such a short amount of time?

Heathrow Airport in London, the busiest in terms of passengers in the UK and Europe and 7th in the World, generates around 110,000 tonnes of waste a year, including that from construction and demolition. With over 80 million passengers travelling through the hub in 2018, this meant that each passenger generated 1.4 kg (3 lbs) of waste, more than the daily average per person, in just 2 hours average. However, the airport recycled 47.7% of its waste in 2018 and managed to reduce waste by 1000 tonnes thanks to aircraft cabin waste entering the airport’s streams and removal of liquid from plastic bottles.

Beijing Capital International Airport, the busiest in China and 2nd in the world, generates an average of 28,000 tons of waste each year. With almost 101 million passengers in 2018, Beijing Airport generated 0.28 kg (0.61 lbs) of waste per person with 80% ending up in landfill or incinerators. This meant that more than 22,000 tonnes never served a further purpose to society.

San Francisco International Airport (SFO), 25th busiest in the world with almost 58 million passengers in 2018, reported 14,000 tonnes of operational waste material were sent to landfill last year. However, SFO´s goal as part of the airport´s strategic plan, is “to become the world’s first zero waste Airport by 2021”. So how can this target be achieved?

What they can do

Flight attendants, politicians, airport directors and airline managers, among others, make a long list of flying industry staff who have a great impact on how the recycling process is executed.

You may be asking yourself ‘how can a bartender improve the 3R (reduce-reuse-recycle) process if they are simply doing what they are told to do?’. The truth is that there are a small number of actions that often slip unperceived but that can make a big difference if we are willing to make the extra effort. What if bartenders save the plastic cup that they offer passengers together with the drink? What if they politely ask passengers to reuse their plastic cup?

At a higher-level, airport policy makers are moving fast to set recycling goals within their facilities. Atlanta Hartsfield International Airport in the USA has set a 90% recycling goal as part of its Zero Goal policy signed in 2017, although a time frame hasn´t been set to achieve it. London Heathrow Airport, however, is moving very fast in this process and has set a 70% recycling target for 2020. 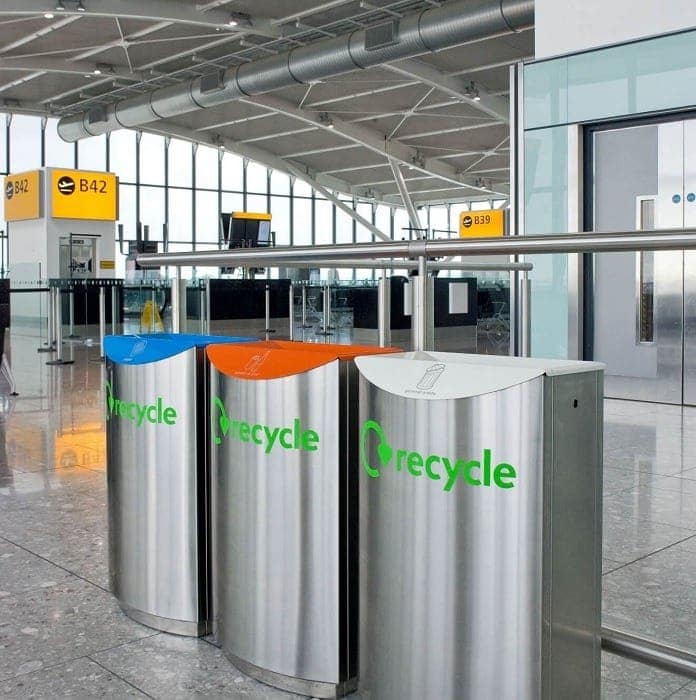 How do airports plan to achieve these targets?

Pretty much every airport nowadays has a recycling policy in place that sets a recycling target with a deadline, and a number of measures to achieve it. For example, in the US, the Federal Aviation Administration (FAA) encourages and promotes addressing issues related to solid waste recycling at US airports.

Measures go from restricting the use of polystyrene (Styrofoam) plastic, minimizing packaging, setting food recovery programs, setting a minimum recycling target for tenants and in general any contractor as per their contract, etc.

Seattle-Tacoma International Airport for instance proposes the following measures to reduce the more than 7,000 tonnes of trash they generate each year:

In the case of Heathrow Airport, there are a number of interesting initiatives: 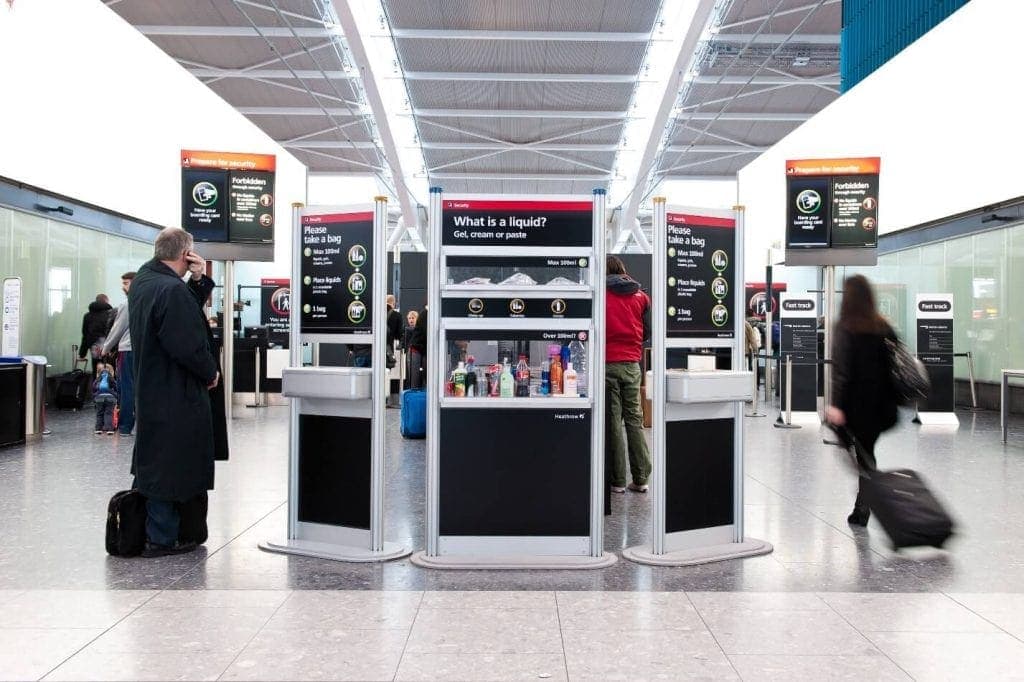 What we can do

Don’t forget that recycling is the last step towards creating a smaller environmental footprint. Reducing and reusing are the principles that drive us not only to generate less waste but also to have to recycle smaller quantities of materials.

Do you want an example of reducing? What happens if you use your mobile phone to show your boarding pass instead of printing a piece of paper? You may think “well, it is just one paper”: yes, yours times 4343 million.

If we talk about reusing, do you know about the rule that does not allow you to pass an empty plastic bottle through the security checkpoint? This is not a rule in any country in the world, so as long as you drink your water before passing security you’ll find water stations in most of the airports in the world, otherwise you can always refill it in the restroom. 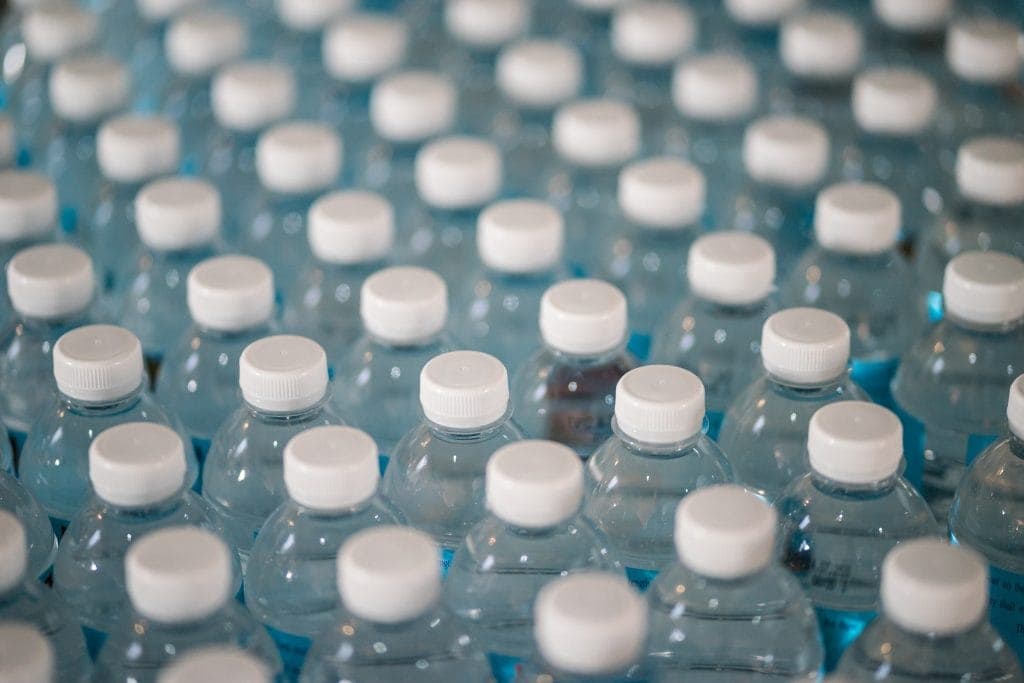 Who are we, that can make this contribution? We are all the travellers that leave our homes to go on holidays, visit the family or just for a business trip. We are all the people that work in an airport, are employed by an airline or want to contribute to the world. In other words, we are everyone, each human being has the responsibility to create awareness and apply our principles to make sure the airports are as sustainable and care about the environment as if it were our own house. Is that possible? Ask yourself this question and you’ll show yourself the degree of contribution you have with the environment.

In my case, I will always remember when I went to Germany to visit a friend, and while I was setting the table to have breakfast, she approached me and asked, “why are you putting that kitchen paper towel next to each cutlery set?”. I didn’t quite understand what she meant but replied “well, I guess it’s a habit, my mum always puts a glass, some cutlery and a serviette as part of each dinner guest basic utensils…” to which she smiled, put her hands down on the table and while dragging away the pieces of absorbent paper concluded “let’s make use of them only when we are sure we need them!”.