Asphalt At More Than 2,000 Meters Above Sea Level: 6 Legendary Mountain Passes on the Tour de France

Eddy Merckx, Bernard Hinault, Miguel Induráin. Three names emblazoned in the history of the Tour de France. With the exception of Lance Armstrong, who was stripped of his seven titles following his doping scandals, these are the three cyclists who have worn the yellow jersey the greatest number of times. That’s 111, 79, and 60 times, respectively. The shirt that every professional cyclist aspires to don some day is celebrating its birthday. The year 2019 marks a century that it has been the attire of champions.

The names of Merckx, Hinault, Induráin, and many others forged their story not only on the Parisian podium, but in the high mountain passes of the Alps, the Pyrenees and other French mountain ranges – summits that are nearly 3,000 meters high. We’re going to review these landmarks today.

Much has happened since 60 cyclists mounted their bikes at the doors of Café au Reveil Matin on the outskirts of Paris on July 1, 1903. Not even half of them were professionals. Even so, they managed to complete, though not without difficulty, a route stretching almost 2,500 kilometers around a France were paved roads were the exception. Thus, the Tour de France, the most important race of the world cycling circuit, was born.

Its history would only be interrupted by the two great wars that ravaged Europe in the first half of the 20th century. Many epic moments have come to pass, such as the Tourmalet descent that made Induráin famous in 1991. Or Marco Pantani’s ascent of Alpe D’Huez in 1997, setting a record that remains unbeaten. Almost all of them have to do with one of these winding roads that cross the roof of Europe.

It has only been part of the Tour de France route four times, and for good reason. The road that goes around the Bonette-Restefond summit on the Alpine border between France and Italy is one of the highest in Europe, towering 2,802 meters at its highest point. With ramps at 15% slopes, this mountain pass was part of the Tour route in 1962, 1964, 1993, and 2008. A fun fact: it was also part of the Giro d’Italia on one occasion (in 2016). 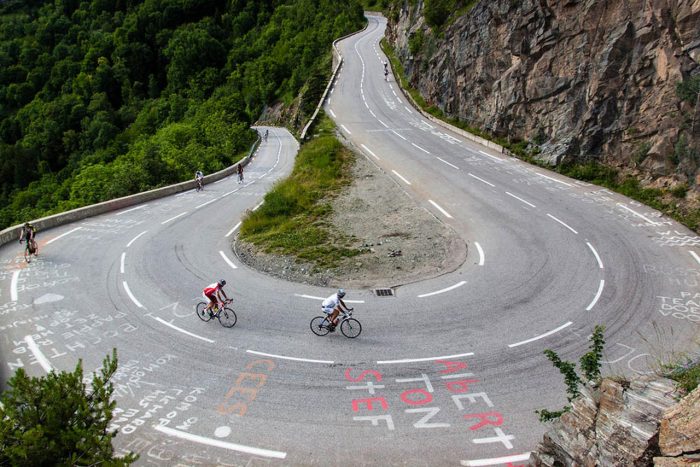 The Col de Sarenne (and the Alpe d’Huez)

If there is any one mythical climb on the Tour de France, it is the Alpe d’Huez. More mountain stages have passed through there (and, in many cases, finished there) on the French circuit than at almost any other summit. Since the 1970s, it has been included in more than half of the races, though it will not be a part of the 2019 tour. However, its level of difficulty (13 kilometers of ascent with an average slope of 8.2%) is not its greatest feature. Its 21 horseshoe curves, with the names of the winners written at the top, are engraved in the mind of every cycling fan.

On one singular occasion, the Alpe d’Huez ascent was done with the Col de Sarenne pass, not known as much for its climbs as the danger of its descent. In fact, it is a category two pass at an altitude of 1,999 meters. But the narrow, poorly-paved road with many winding curves was heavily criticized by cyclists. In 2013, after their descent participants then climbed the Alpe D’Huez again. An unbelievable decision made by the organization (the first time a pass had to be climbed twice in a row) that marked the 100th anniversary of the Gala.

Yet another name that resounds in the minds of the fans. A mythical mountain pass, the summit of the Pyrenees is the mountain that has been ascended the most in the history of the Tour de France: a total of 86 times. And we’ll see it again in 2019. In addition, the Tourmalet ascent has also been part of Spain’s Vuelta Ciclista on several occasions.

The first cyclist to reach its summit was Octave Lapize in 1910. He had to finish part of the tour on foot, carrying his bicycle on dirt and gravel roads. Today, it’s still a tough climb. It’s 17 kilometers long and a maximum slope of 12% on its most complicated face. That said, it’s perfectly paved. 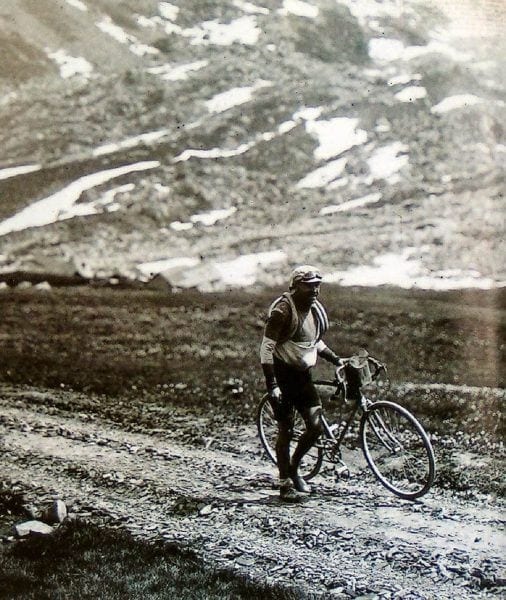 Octave Lapize, on the Tourmalet ascent in 1910. / Wikimedia Commons

On 73 occasions, the Gala has gone through Col del Portet d’Aspin. Though it is not one of the highest passes at 1,489 meters, it has become one of the classics of the race thanks, above all, to its natural state as a pass to other higher peaks in the Pyrenees, such as the Tourmalet. In fact, the first time it was ascended was in 1910 when Lapize climbed the Tourmalet on foot.

It has only been climbed three times, but it is one of the Tour de France’s most recent additions, and it is threatening to become a classic for the next 100 years. In 2012, 2016, and 2017, this giant of the Jura mountain range (north of the Alps) surprised everyone with its difficulty. An ascent over 18 kilometers long with an average slope of 7%, and ramps nearing 20%.

The over 21-kilometer ascent of Mont Ventoux. The 31 kilometers of Col du Galibier where Pantani and Anquetil triumphed.  The irregularity of the Col de la Croix de Fer. These names populate the list of mythical passes on the Tour de France, a list as long as its nearly 116 years of history.