Handguide for surviving the holiday season

The countdown to the holidays has begun, and with it comes the sweets, the endless shopping, the Jackpot drawing, family reunions, Christmas fairs, and resolutions for the new year.

Over the next few weeks, our schedules will be full of social commitments where we have to be at our best (or at least try). In order not to fail in that attempt, below we’ve provided a series of universal tips to be the perfect guest and survive the Christmas celebrations with outstanding. Take notes!

Punctuality: We often forget the importance of punctuality, but when we are guests at an event, this is the first impression we give, the image that we project of ourselves to everyone else in attendance. Punctuality is a gesture of politeness that is indisputably linked to responsibility and respect for other’s

Greetings: it may seem trivial because, when we are in a trusted environment, we greet each other naturally without thinking about it. However, when we attend a formal event where there may also be attendees from other countries, it is advisable to have some basic ideas on the topic.

Fun fact! These are common greetings in other countries:

Clothing: the gold standard will always be following the dress code, but in case there isn’t one, it is advisable to use common sense and be aware of the type and style of the event. We will always be in the right when choosing a tasteful, elegant look that doesn’t clash with the atmosphere or other guests. Less is more!

Phones off! Using cell phones at social events is considered to be disrespectful and rude unless we’re taking a photo or need to answer an urgent call. In this case, we should be upfront in stating that we’re expecting a call or message and excuse ourselves when it comes. In short, the best thing that we can do to beat “FOMO” (the Fear of Missing Out) is to put the phone away and put it on silent.

At the table: If you are invited to an important lunch or dinner and don’t know what to do with all of the cutlery on each side of the plate, don’t panic! Follow these simple rules, and you’ll be fine:

First off, to know what we have at the table, remember the British BMW rule: “bread” on the left, “meal” in the middle, and “water” (or wine) on the right.

Once settled at the table, we will always start with the flatware farthest from the plate, that is, from the outside in. The forks are always on the left and the spoon and knives on the right. Dessert cutlery is placed above the plate.

To show that we’re finished, put the cutlery together in parallel – but never on the tablecloth! 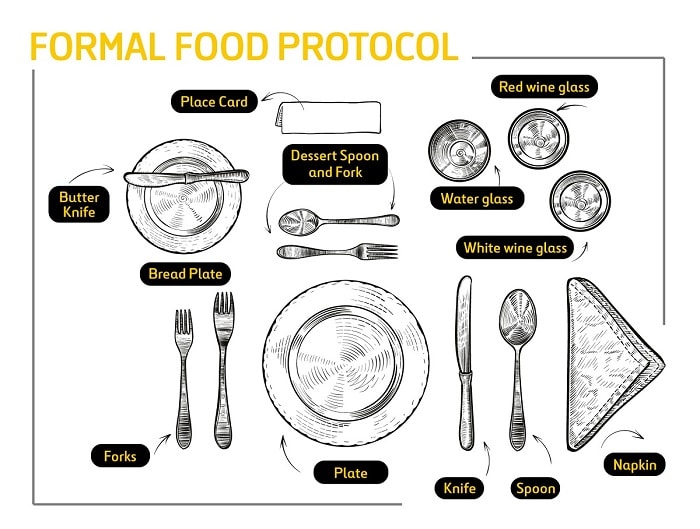 Topics of conversation: To maintain the peace and cordial spirit of these occasions, the most recommendable thing is having smooth, warm conversations, or the Anglo-Saxon world’s “small talk.” Etiquette experts recommend avoiding controversial or hot-button topics at these sorts of get-togethers, as they may lead to arguments or make other guests uncomfortable.

Avoid over-doing it: thoughtfulness and common sense will always be our best friends in being good guests any sort of celebration. As a general recommendation, avoid excesses of any kind since this may lead to situations that we will surely regret, sooner or later.

And most importantly… enjoy yourself! The success of any event lies in getting guests to have a fun, pleasant evening in the best company. For this reason, the best we can do is relax, be ourselves, and enjoy the moment.