Huoshenshan: How to Build a Hospital in Ten Days

The coronavirus 2019-nCoV surprised the world on December 31, 2019, under the guise of pneumonia. A week later in Wuhan, China, its epicenter, cases of contagion soared, and, unfortunately, the death toll began. In Wuhan, the decision was made to build a 25,000 meter-square hospital with 1,000 beds in record time, and its capacity has stunned the world.

On January 23, the first backhoes arrived at the site for the Huoshenshan Hospital (火神山医院), and on February 3, the first patients entered. How did China achieve this engineering record? Is the hospital fully equipped? Have these and other technical measures managed to stop the spread of the virus? Good news: we have information on it.

The death toll in Wuhan had reached 80 when a small army of backhoes, trucks, and other construction machinery started to pave a 50,000 m2 plot. The goal? Building a hospital in record time to decongest the overcrowded local hospitals.

Thousands of people were mobilized (and militarized) as construction professionals, and the international community watched as, for three days with their nights, the technical staff did not stop until they had leveled the area. Working against the clock in shifts of up to 12 hours, giant floodlights were installed on cranes so they could work at night.

After that previous phase, it was time to add gravel to stabilize the area. In the construction of an ordinary hospital, they would have had to create deep concrete base plates, but they opted for a flat design of prefabricated construction sheds with a minimal foundation. There was no time.

This design, which came to fruition on January 28 (while leveling was in full swing), follows in the steps of the Xiaotangshan-SARS Hospital, which was built in 2003 in the suburbs of Beijing to deal with SARS. On the same day, the 28th, the first formwork frames began to be installed, and through the television circuit, the world witnessed the construction’s progress. Hardly a day later, the concrete was covering a surface of 50,000 m2 and started to cool.

How was Huoshenshan hospital built?

As with the expansion of the Xiaotangshan Hospital (Xiaotangshan-SARS or 小汤山医院 SARS), the new Huoshenshan hospital is made out of prefabricated construction sheds assembled together. Though it is not a field hospital (the walls of those structures are usually canvas) or a factory hospital (brick), the Huoshenshan makes use of sandwich panels and walkways and is perfectly equipped.

We could make the mistake of thinking that, since it is a structure made up of prefabricated containers, building it was easy. The fact of the matter is that the protocol for care and isolation needed for a hospital of this size is enormous, as well as the technique for building it. The Chinese chain CGTN used a fittingly epic tone for its construction:

With space for 1,000 beds and 1,400 doctors, the Huoshenshan incorporates the kind of pipes we would find in any other hospital. After the addition of air ducts, several layers of waterproofing, and a large number of posters and different medical equipment, the hospital was ready to open to the first patients on February 2.

Aid against the coronavirus

Two days after construction began on the Huoshenshan in the center of Wuhan, Leishenshan Hospital (雷神山医院) was being built in the Jiangxia district. Another hospital with 1,500 more beds. On February 2, when the Huoshenshan commission gave the first hospital the green light, the second was 80% built. 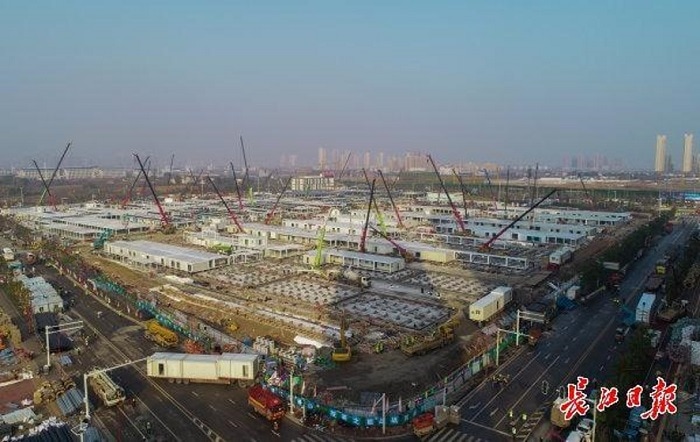 On January 28, the National Development and Reform Commission had allocated 300 million yuan (€38.7 million, or $42.8 million) for the construction of both hospitals, but both would have been impossible without the help of big businesses that were willing to send material.

Building a hospital is more than building foundations and walls where doctors can work safely, and the construction of the Huoshenshan would have been impossible in under three weeks without this help. In the end, it took about 11 days to build a hospital from scratch in an enviable display of coordination.

Technical efforts to control the virus

As we are writing this article, the Johns Hopkins CSSE world map is displaying different metrics, such as the 20,679 confirmed contagions and the 427 deceased. In green, there is a figure for hope: 718 people recovered from the virus after having had it. During the first few days, the situation looked bleaker, but today, more people are surviving than are dying from the coronavirus 2019-nCoV.