Valentine's Day: The Impact of Love Locks on Bridges

From time to time, a team of workers approaches Paris’s Pont des Arts with shears and circular saws, coming to cut the “love locks” that have built up by the ton on the railings. No worries, they don’t have anything against love, but they remove the padlocks so that their weight doesn’t wear at the bridge structure.

For years, but especially on Valentine’s Day, the padlocks have been accumulating on bridges and other architectural structures. Even though its origin is not fully known, the culprit may have been a romance novel. The truth is that the weight of several tons of padlocks can permanently damage the structures and even cause safety problems.

What happened with the love locks on the Pont des Arts in Paris?

The film Amelie, released in 2001, shows the protagonist walking through the Pont des Arts, the iconic site of the Parisian city, and there is not a single padlock anchored to the railing. They are also not seen in home videos recorded by tourists at the end of 2007. No locks at the beginning of summer 2008, nor that fall. Until someone put one on that year. Like any trending social phenomenon, during the first months of 2009, the love locks were just a trickle.

But then something unexpected happened: someone shared a photo on social media. Maybe at Fotolog, then en vogue, or perhaps on Twitter, which was already three years old. The phenomenon went viral – this word was also fashionable at the time. Since then, couples would come on Valentine’s Day to add padlocks, a practice that soon spread to any other day. No one knows who uploaded the first photograph, but one of the first formal complaints appeared on March 3, 2010, in the newspaper 20 Minutes. At that time, there were more than 1,600 padlocks hanging from the railings. The phenomenon had just gotten started.

In the purest Streisand effect, months after that publication the Passerelle Léopold Sédar Senghor, the Pont de l’Archevêché, and the Passerelle Simone de Beauvoir, all in Paris, began to see padlocks on their railings and metal parts. Anywhere a padlock could fit, a “love lock” appeared. 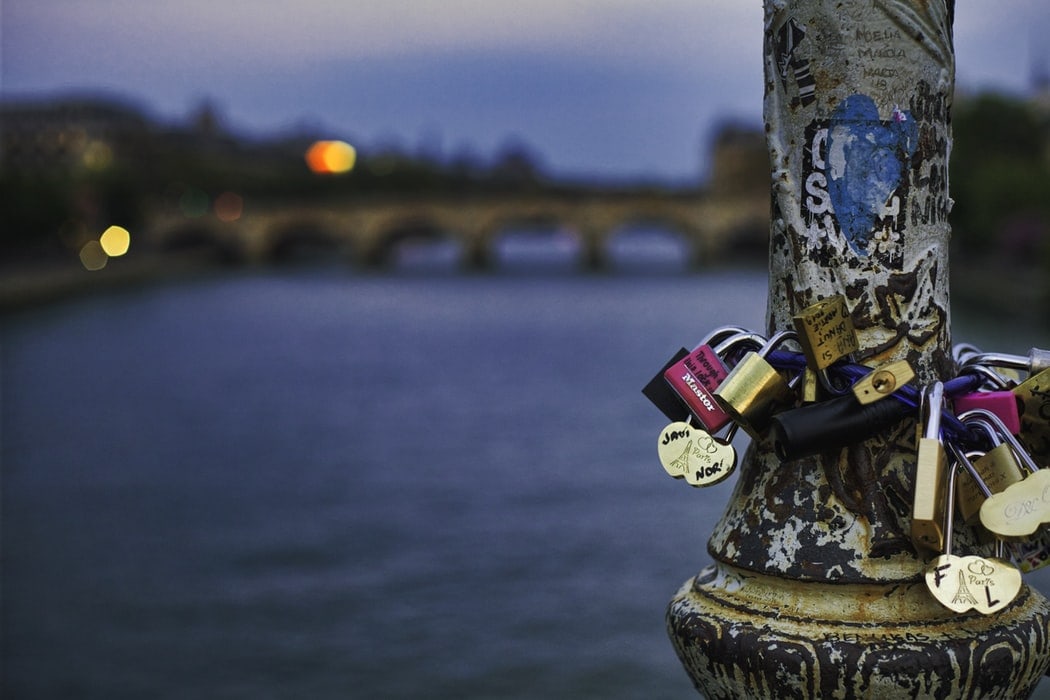 Once the first one was added, a huge mass of interlinked metal grew almost organically. When it wasn’t possible to put the first one on, as with the lamppost above, someone would put a chain around it. And then the chains started to grow, pushing the structure down.

Can a novel bring down a bridge?

It takes a lot of padlocks to sink a steel architectural element. That said, in 2006, Italian writer Federico Moccia published his second novel and the bestseller ‘I want you’ (Ho voglia di te in the original). The story’s protagonists hung a padlock from the third lamppost on the Ponte Milvio (Rome) to “seal their love.” Inspired by the romanticism of the novel, hundreds of couples did the same during 2006 and 2007 at that part of the Milvio Bridge (which is real and dates back to 1489). At the end of that year, the weight of the padlocks almost dragged the lamppost to the bottom of the Tiber. Luckily, the city council removed the locks in time.

Furthermore, the consistory installed 24 metal columns for lovers to leave the padlocks in 2008. In a sense, it was a success. The couples would come and hang a lock on the post. But thousands of lovers would come with their bits of metal, and some risked a €50 fine for anchoring it to the lamppost. Others were simply unaware that it was not allowed. The padlocks kept piling up. 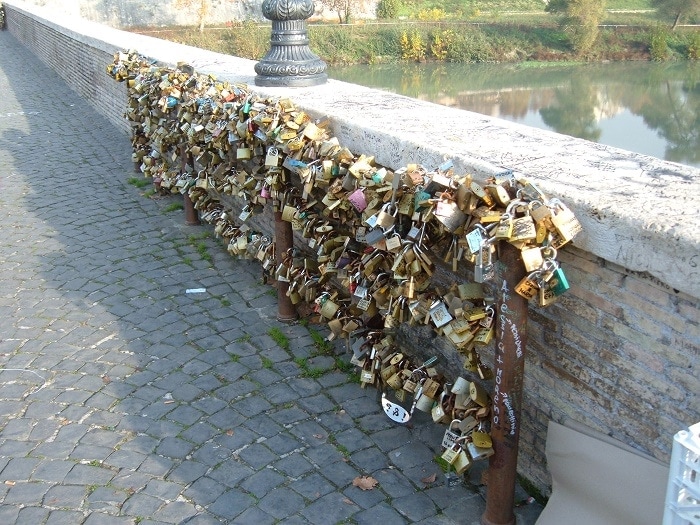 As in Paris, a photograph of two lovebirds kissing by the lamppost attracted many more people. In 2011, shortly after the first complaints in Paris, the president of the municipality, Gianni Giacomini, warned that “the weight of the great iron mass is jeopardizing the stability of streetlights and walls.” The situation was starting to get serious.

Can padlocks pull down a bridge?

Tearing down a brick bridge is not as simple as putting enough weight on it. The key is where this weight is placed and how it is acting as a lever. For both the Pont des Arts and the Ponte Milvio, the problem was that the padlocks were on structural elements that were raised and anchored to the profile of the bridge. The image below attempts to simplify this concept. The vertical weight of the padlocks is shown in blue. In principle, the bridge could withstand several tons of vertical load despite being designed as a pedestrian bridge. The serious problem comes from the moments (the curves) that act on the outer axis (in red). Where do they come from 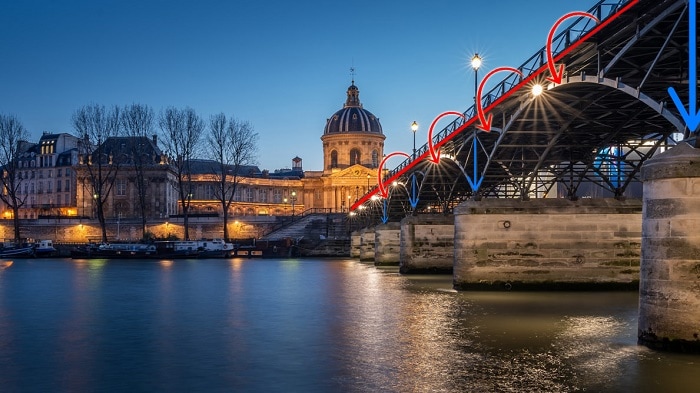 In addition to deteriorating the railing (which is not designed to carry weight), the weight of the padlocks has an off-center component that doesn’t fall on the columns’ vertical, especially if a lamppost or railing ends up giving way and tilting. And several tons of padlocks twisting the axis in red above could cause serious damage to the structure.

In fact, in 2015, the city council removed the old railing made of metal bars with a mesh (loaded with 50 tons of padlocks), and they replaced it with a metal screen and thicker bars, which were also set back so that the weight was better distributed. Unfortunately, there are still tourists who come up with ways to add their locks on in any way they can find on the structure. 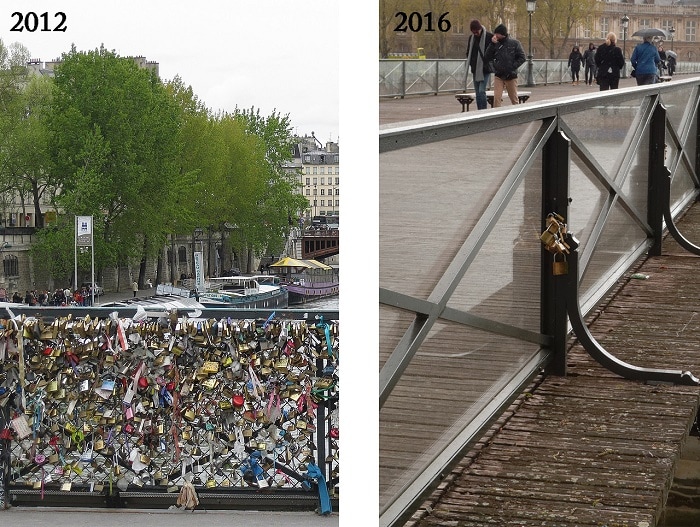 Why shouldn´t we put locks on bridges?

The weight of padlocks not only has a visual impact on architecture, an effect that could even be considered an artistic addition; it can also affect its stability and safety. Something similar happens with the stone monoliths stacked up on beaches or taking sand from them.

Though, as tourists, we feel an impulse to make our mark or keep a souvenir, the continued impact of thousands of us on emblematic sites can eradicate their real beauty. This is why the authorities in Paris, Rome, and other cities where Valentine’s Day locks may lead to structural problems are calling for a greater sense of civic duty.