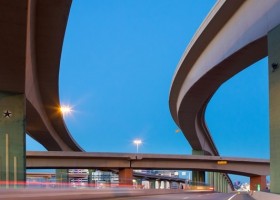 Since its construction some 40 years ago, the LBJ Freeway (I-635) has become one of the most congested and crowded roadways in the United States. That is about to...

Cintra, Ferrovial Agroman and Webber are turning the 50-year old LBJ Freeway into the LBJ Express. The...

Late in the morning of September 10th, 2015 the Webb Chapel Road overpass of the notoriously congested LBJ Highway in Dallas, Texas was awash with blue and red flashing lights and a chorus of sirens. This was no emergency though; this was a celebration. Emergency vehicles and vintage rides lined up for an inaugural drive on the LBJ TEXpress Lanes running beneath the LBJ Highway. When the LBJ Highway opened in 1969, it was designed to hold about 180,000 vehicles per day. Based on traffic counts to date in 2020, demand has increased to over 500,000 vehicles per day. In its 60-year lifetime, the LBJ Highway had developed itself something of a reputation, those that queued to join it only did so out of necessity. The LBJ TEXpress Lanes would change all that.

In 2009 all we had was a song and dance. There was no other managed lane (AKA tolled express lane) corridor in Texas or anywhere in the United States exactly like the LBJ Project. In the beginning we didn’t have anything to compare it to. Getting through the first 4.5 of construction years was the biggest challenge.

The old LBJ Highway had gained itself the unenviable title of America’s Most Congested Highway in its long service to the people of Dallas. This infrastructure was feeling its age and it was going to take a very creative and pioneering team to update it. There were, however, a number of catches. We couldn’t go any higher or any wider, but we needed to nearly double the capacity. The LBJ Highway was 60 years old and we doubled capacity with 21st century engineering and design standards. 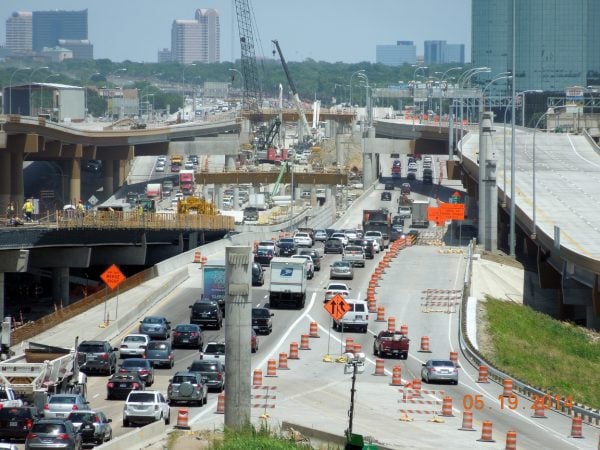 The project was ambitious in its scope – doubling capacity to an aging highway without adding to the congestion. There was also the small fact that due to noise pollution concerns, building up was not an option. Add to this, the fact that there was no option to widen the highway as homes and businesses were in close proximity. Our team was faced with the conundrum of making the highway safer and more reliable for the public, which the public wanted and needed, while the public simultaneously didn’t want the areas in and around the highway changed very much at all. The solution was a radical one: the largest and most complex three-tiered cantilevered project. 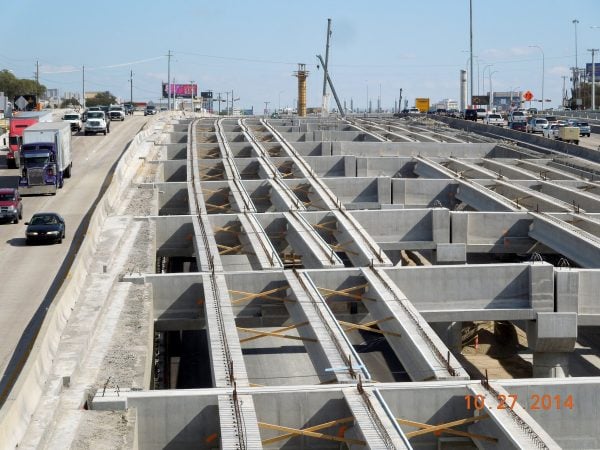 An ambitious subterranean approach prevented the need for running a 13.3-mile-long tunnel beneath the bustling Dallas freeways. Rather than building beneath the existing highway with a closed in tunnel, the new express lanes of LBJ would be open but cantilevered. The cost saving measures this approach allowed meant that the initial estimate of $3.5 billion was slashed and the new project was delivered at only $2.6 billion. As nothing like the LBJ Expressway Project had been undertaken anywhere else in the US back in 2009, we mistakenly thought it must have been quite a daunting prospect. 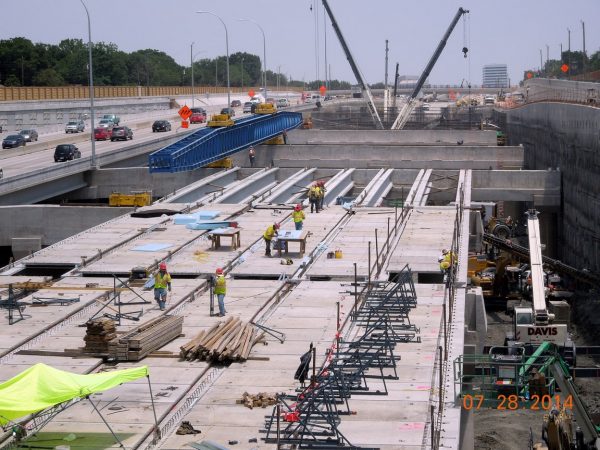 The best part of working on the project was the newness of it, the fact that it hadn’t been done before, I thrived on that. We had to build a team and get creative and innovative.  And after such a cutting edge start to the project, it hasn’t slowed down since then. We’re always on a start-up phase, there’s always a challenge. More than 100 people a day are moving to the North Texas region and they’re all bringing cars and kids with them. The traffic then was doing nothing but crawling, so we created the needed congestion relief.

Did our ambitious plan work?

In short – it did work and it’s still working. The enthusiasm for innovation is not an exclusive reserve for us, the project’s pioneers. Relative newcomer to the team, Andy Nguyen joined LBJ Infrastructure Group in 2019 and we work closely on Marketing and Community Engagement. Although the LBJ TEXpress Lanes were a resounding success at their opening in 2015, five years on Andy and his team are still looking to improve their understanding of how drivers use the managed lanes and how to improve their experience.

“My focus is on consumer marketing and education. I help drivers understand new concepts like what are managed lanes? What is dynamic pricing? We had to communicate to our drivers that they always have a choice for their daily commutes, and the LBJ TEXpress Lanes offer added benefits such as faster drive times to get drivers to their destination safely & reliably. Our well-maintained roads, roadside assistance services and predictable travel times means less congestion & stress for our customers.

The choice Andy mentions is a simple one, drivers can stick to the non-tolled LBJ general highway lanes if they like or they can take advantage of choosing the adjacent LBJ TEXpress Lanes where dynamic pricing aims to keep traffic flowing at a minimum of 50 mph. Unlike other toll roads, dynamic pricing means toll prices change based on real-time traffic conditions to keep traffic flowing at all times. It’s been a challenge because it’s not intuitive, but we’ve provided the benefits and the data backs us up. We know how drivers use the lanes and we’ve grown revenue year-over-year while delivering results. It’s really about speaking to customers, so they know what the TEXpress Lanes are, how to use them and how to make more use of them.

The innovative design of the new LBJ Express corridor and the creative teams behind it mean that the first four and a half years wasn’t just the start of an engineering marvel but the foundation for an ever evolving and developing infrastructure. As Andy states, “we’re always transparent about toll rates and the more the customer knows about how it works, the more positive the overall experience. We’ve had five years of tremendous year-over-year growth so here’s to five more coming up with continued innovation.”

Community engagement doesn’t end at education on the LBJ TEXpress Lanes. We have always from the very beginning been engaged in the community, giving to the school districts along the corridor in areas like Science, Technology, Engineering and Math, that’s a high standard that we set for ourselves. A high standard indeed and one the LBJ team have set from the start. Five years on the LBJ Express project team partners with local educational foundations along its corridor to provide teacher grants that support STEM education and activities. Even during construction, the community could reach out to the LBJ Project, a win-win for everybody. For example, the creative use of 135,000 cubic yards of fill the project yielded from its subterranean advancements was put to good use by the City of Dallas to convert a brownfield site into a new soccer complex resulting in a saving of $1,080,000 to the city. An existing pedestrian bridge was removed and replaced with a more suitable, ADA approved one which now allows wheelchair and mobility scooter users to safely cross. Sidewalks along the length of the project were improved meaning the benefits of the LBJ project reached far beyond its initial scope. 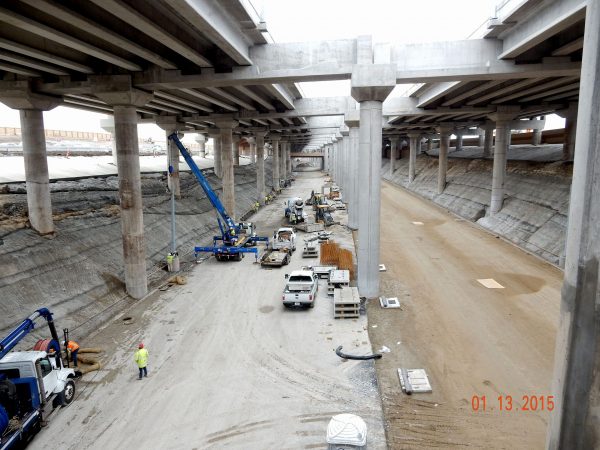 Andy sumps it up: “I was using the lanes every day and didn’t think about it. I had this choice where I could hop on the lanes and get to work quickly in the morning and home to my family  in the evening. The time saving benefits on my behalf were huge, I always use the managed lanes – it’s faster and it’s just reliable. That’s exactly right, the choice is the biggest deal. This managed lane concept gives the driver a choice. You can go ten or fifteen miles an hour faster. There are not many people who use this toll road all the time but if they need them, they’re there. 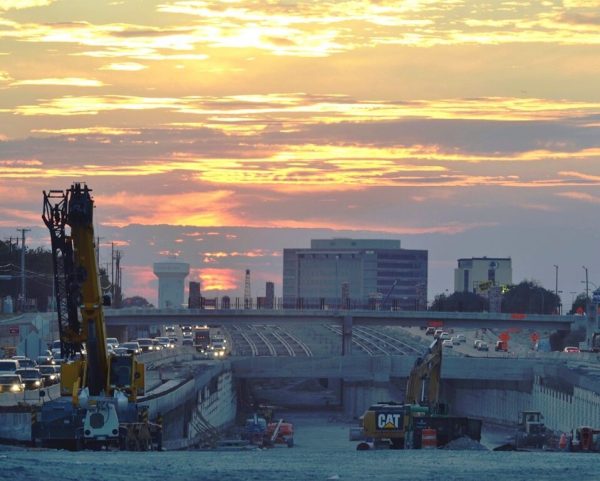 Looking to the future

This multi-award-winning project has not only improved travel in Dallas, its reach into the lives of those around it has also been hugely beneficial. September 2020 sees the five-year anniversary of the opening of the LBJ TEXpress Lanes. Now more than ever, it’s an event worth celebrating. Rising from the ashes of the financial crisis in 2008, the LBJ Project seemed too farfetched, too ambitious and one potentially doomed to remain simply an idea. With our team’s dedication, we have made the impossible possible and wound up with an infrastructural marvel and operational success.

While September 2020 sees a world still in the throes of a global pandemic, it’s easy to lose sight of the things worth celebrating. Even though most of our team are working from home, they’re still supporting the community. Andy is proud of the work they’ve been able to do to support Dallas in these trying times: “During this global pandemic, we were able to provide COVID-19 relief to over 5,200 essential medical personnel employees in the form of over $30,000 in discounted toll savings. And I also want to highlight the hard work of the people behind the scenes. Our CSR is really important to us and Andy makes a great point, our leadership is forward thinking. We have launched that discount campaign for nurses and doctors and first responders. We also reached out and worked with Ferrovial and Cintra to work with the foodbanks in North Texas during the Pandemic which have been providing resources to families and folks who’ve lost jobs. We’re planning on expanding during the holidays.

So, while no one could have foreseen this particular five-year scenario, the team are still forward thinking. The past five years for the LBJ TEXpress Lanes have been hugely successful and the next five years are looking bright. Most encouraging of all from this story is the mirroring of the LBJ Express Project’s beginnings to the economic situation we find ourselves in in 2020.

Not unlike the legislature in 2009 that helped get the LBJ TEXpress Lanes started, the upcoming session arrives on the heels of some very dark times. Who knows what innovative new opportunities will rise from 2020 and the years to come? If the success of the LBJ TEXpress Lanes is anything to go on we have a lot to look forward to. With this in mind, it’s worth remembering that the LBJ Expressway Project utilized more than 1,000 local firms during construction. This included more than 230 Disadvantaged Business Enterprises (DBE) contracts. After only five years of hard work (and three months ahead of schedule) 13.3 miles of the LBJ Highway became the LBJ TEXpress Lanes opening up the Dallas-Fort Worth Metroplex like never before.

As long as people have mobility, they’ll always have opportunity, or as Lyndon B. Johnson, the LBJ TEXpress Lanes’ namesake said himself “We seek not just freedom but opportunity.”

Since its construction some 40 years ago, the LBJ Freeway (I-635) has become one of the most congested and crowded roadways in the United States. That is about to...