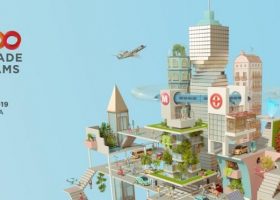 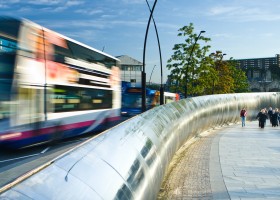 Current predictions suggest that the world’s population will surpass 8 billion in just one decade. By the middle of the century, that is expected to reach almost 10 billion. However, few figures are even more staggering than those on cities: some estimations predict that there will be at least three urban centers with populations of over 50 million by 2075.

Growth is so high in some regions that many are wondering which city will be the first to reach 100 million. According to the UN’s numbers, sub-Saharan Africa will be the main player in this growth; the structure of the world as we know it will undoubtedly hinge on this.

The rapid growth of the world’s population is flanked by higher birth rates and lower mortality. According to the UN’s ‘World Population Prospects 2019’ report, sub-Saharan African countries could account for more than half of the global population growth between 2019 and 2050.

In fact, growth is primarily expected to be seen in nine countries (five of them from the African continent): the Democratic Republic of the Congo, Tanzania, Ethiopia, Nigeria, Egypt, India, Indonesia, Pakistan, and the United States.

Many individuals will move to cities in search of new opportunities. Many others will be born there, thus contributing to the population increase. This will add to a paradigm shift, and larger cities will not only be found in Asia and the Americas, but also in the African continent.

For cities themselves, such substantial population growth in such a short time poses numerous challenges. First off are the organizational questions: creating good infrastructure and services is a must. Secondly, and closely related to the above are environmental topics. Sanitation, transportation, and energy services, to name a few, depend on cities being clean and maintaining low emission levels of carbon dioxide and other greenhouse gases.

All of this factors into whether or not cities can ensure their residents’ human rights by offering them jobs, education, and a safe, healthy way of life.

Today, the 47 least developed countries in the world have the fastest-growing populations. Many of them are expected to double in population between 2019 and 2050.

Similarly, some of the cities that currently top the list as the most populous are expected to fall in ranking in the coming decades. This list includes Tokyo, Japan, with some 37.5 million people in 2018; New Delhi, India, with about 28.5 million; Shanghai, China, at 25.5 million), and Sao Paulo, Brazil, and Mexico City, Mexico, each with about 21.5 million.

Back in 2016, a study by researchers Daniel Hoornweg and Kevin Pope mentioned the cities that could grow the most during the 21st century. Some of their projections have since changed, but several of those cities are still favorites to lead the running. They are Lagos, Nigeria, Kinshasa, DR Congo, Dar-es-Salaam, Tanzania, and Mumbai, India.

Like so many other African cities, Lagos was just a small town in the 1970s. In fact, it was far from ever making the list of the 18 cities with over five million inhabitants at that time. However, by 2018 it was on this list with 13.5 million residents. It is estimated that by the end of this century, it will reach 88 million people.

This city’s disproportionate growth has led to numerous makeshift settlements. Many areas of Nigeria’s richest city lack access to sanitation and other basic services.

In 2018, Lagos had 13 million inhabitants; in that same year, Nigeria’s urban population surpassed the number of rural residents for the first time. Lagos is not the only city in the country experiencing growth: so is Gwagwalada, for instance. This city has a population of about 410,000 inhabitants and is expected to grow by up to 102% by 2035 to reach 827,000. 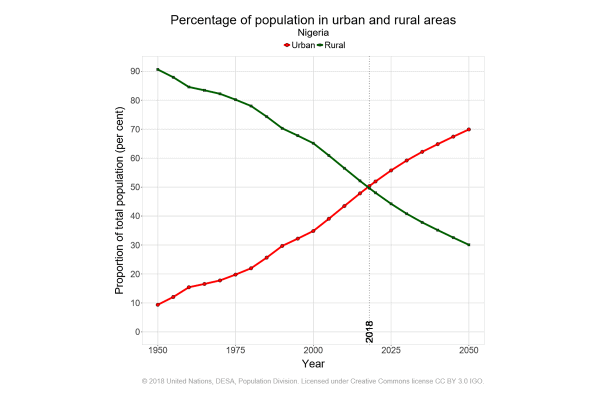 Percentage of the population living in rural and urban areas in Nigeria. UN

The city of Kinshasa rolls for miles along the banks of the Congo River, crossing the country to finally flow into the Atlantic Ocean. Its exceptional location – plus the conflict the rest of the country is going through – forces hundreds of thousands of Congolese to move to this city every year.

However, the Democratic Republic of Congo’s rural population still exceeds the urban population. This means that Kinshasa still has room to grow over the next few years. In 2018, the city was home to 13 million people. Estimates for 2030 are around 22 million; for the end of the century, almost 83 million.

New Delhi, Tokyo, and Shanghai are at the top of the list of cities with the highest population estimates for 2030, according to the UN. However, potential growth over the next 70 years to the end of the century depends on factors like birth rate and the percentage of the population that can still move from the countryside to cities.

By considering these factors, cities like Dar-es-Salaam, Tanzania, or Bangalore, India, become frontrunners for becoming the next supercities. What happens in the coming decades will depend on these cities growing in an organized way, as well as their ability to respond to the needs of the millions who are predicted to move to these centers.