Oceanix City: Can This Floating City Become a Reality?

Could we build Oceanix City in the middle of the ocean? This futuristic idea was designed by the Bjarke Ingels Group with MIT’s Center for Ocean Engineering and Oceanix’s engineers. It was proposed in support of the UN’s New Urban Agenda in response to the state of emergency regarding people being displaced by the rising sea level.

The high cost of keeping these cities afloat – literally – would make implementation in the near future difficult, but the technology to spread floating cities across oceans has been around for centuries – though it at a high price. Now that we have floating levee technology, will we use it to build entire countries from the ground (or sea) up?

What is Oceanix City, and why will we need it?

Oceanix City is a design for a floating city that answers the question, “Where will people live when their home countries are underwater due to climate change?” Countries such as Kiribati, 33 islands in the middle of the Pacific, are one example of the problem facing some with waters rising because of global warming.

Ghoramara Island in India has seen erosion displace entire families. Inhabitants on some islands or atolls can’t travel to their country’s mainland because there is no continental or elevated land to go to.

The UN set forth a risky proposal: instead of being displaced by the climate and fleeing to another country, would it be possible to create floating islands where those are going underwater? Ideas were thrown around, and there was a surge of floating city designs: Lilypad, Artisanopolis, Storm Makes Sense of Shelter, and Prismatic Module Island. 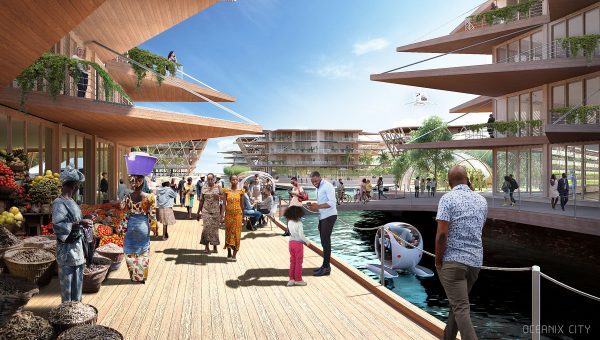 Oceanix’s captivating, aesthetic rendering features a modular floating building with a fractal design and two-hectare neighborhoods. But, just as everything can be made to work on paper in engineering, computer design modeling allows realistic visualization of all sorts of ideas. Has anything like this ever been done before? Yes – and no.

Floating “cities” are nothing new under the Sun

In 285 AD, during the military campaign against the Wu Dynasty, one of the most unusual warships in the ancient world was designed: a sort of moving castle called a louchuan. Chinese siege weapons were set up for river skirmishes, and out-of-place items like ovens and stables were sometimes included on ships.

Some of these moving castles were similar to the tessarakonteres from the Hellenistic period (below) around 300 BC. The tessarakonteres were huge platforms on catamarans or other vessels, and they could carry thousands of soldiers. A louchuan was similar but with towers with up to five or six levels. 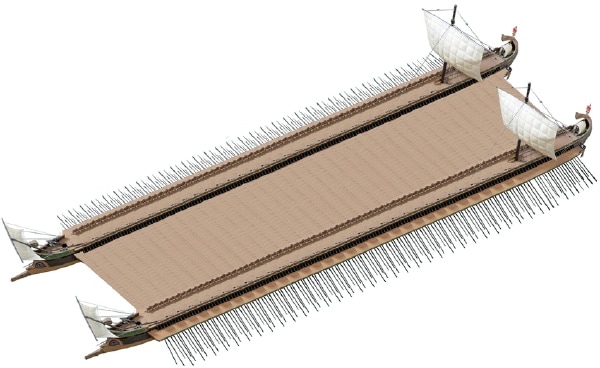 In 1421, Chinese Admiral Zheng He sailed 317 giant ships in the so-called Treasure Fleet. It was made up of many barges that measured up to 183 meters long and 51 meters wide (though likely smaller on average). The latest research suggests the Chinese fleet reached America decades before Columbus, which doesn’t make sense technically.

Spanish, Portuguese, and English ships were wooded, but the Chinese used much lighter materials so they could be massive in size. In comparison, Columbus’ fleet had 84 men in the Niña, Pinta, and Santa Maria (28 crew members per ship on average). Zheng He had a crew of 27,670 men over 63 treasure ships (439).

How a floating city works

Effective weight and flotation are key factors. In the six centuries since, we have learned how to work with steel and build huge floating levees where we can build all kinds of structures. Oceanix City no longer seems so far in the future. It’s not particularly affordable. 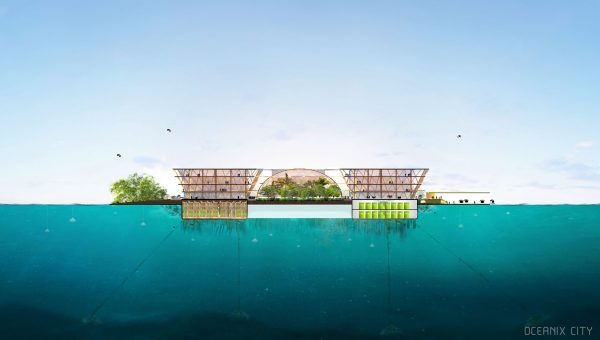 Oceanix City wasn’t designed by artists but engineers from MIT’s Center for Ocean Engineering and architects from the Bjarke Ingels Group studio. The idea was to imagine a workable city, and this starts with the platforms’ buoyancy. These rest on floating levees, like the ones Ferrovial has been building for decades. In this sense, none of the technology is new.

There isn’t anything new on the platform level, either. Less dense materials, open spaces, and mostly pedestrian mobility (with some biking and even swimming) are preferred over heavy vehicles. In the city model for 360,000 residents, everything is a 10-minute walk away. 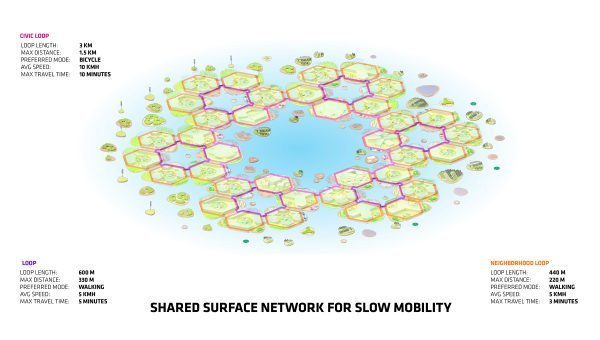 There are interesting innovations at the engineering level in waste management. The goal is zero waste, zero-kilometer food production with hydroponics or aeroponics, desalinating ocean water, and using clean energy. We could soon see today’s cutting-edge fields in technology on the water.

Perhaps the most interesting thing about these cities is the closed-loop – it isn’t just for waste. Getting across Manhattan (1.66 million residents) takes 30 minutes driving or 70 minutes biking. However, Oceanix’s model with a population of 2.52 million can be crossed by bike in 60 minutes. It’s another way of organizing space.

When could we see these city-islands?

Technically, such platforms are not a challenge, Managing such a construction project, including money, is a huge obstacle. In 2013, an estimate was $15 million per platform, though not all are residential and many additional platforms are needed for basic services (food, energy, etc.).

For 225 to 300 people, building one island would cost 167 million, excluding maintenance. Since the minimum size of these cities is intended for 10,000 people, the $5.6 billion down for the pilot, plus maintenance and unforeseen costs, pose a problem.

It is highly unlikely that we will see these buildings before 2050. This makes them very ineffective in the plan to combat the effects of climate change. Some private initiative may start building more basic models, as with space tourism (for the rich), and costs will gradually go down. For the moment, it’s a nice rendering.