The La Paz tunnel is located in the La Paz mountain range in Lebrija, a municipality in the department of Santander (Colombia). This region has a warm climate with two annual periods of torrential rain, as its proximity to the equator makes the vegetation lush. Each rainy month, it rains about as much as it does in the province of Galicia in a whole year (Galicia is the rainiest region in Spain). Besides that, the project is located in a tropical forest with fauna ranging from jaguars, sloths, and boas to turtles and birds of all sizes and colors.

These conditions make the challenge that both my team and I are up against with the Bucaramanga-Barrancabermeja-Yondó project (Colombia) one of the most difficult we’ve ever faced. The work team is made up of Cintra, operator of the concessionaire, and Ferrovial Construction, in charge of rehabilitating the road. Both entities are within a consortium known as Ferrocol which is responsible for the construction of the La Paz Tunnel.

As for the engineering challenges, we should note that point when completing the tunnel, when the galleries excavated from both sides of the mountain meet. This milestone is quite close to becoming a reality, and it marks one of the most important events in the entire project. This is because it is very likely to become the most significant work along this entire corridor, which spans more than 100 km.

Despite having seen the different factors behind the project, it is also important to remember that it is a two-lane tunnel, one in each direction, and with an evacuation tunnel measuring 3,127 m built using the Austrian method. It therefore involves mechanical excavation with two phases of blasting (advance-destruction) and with different progressive lengths and support, depending on the nature of the terrain. It should be noted that this is a conventional tunnel excavation method used many times around the world. 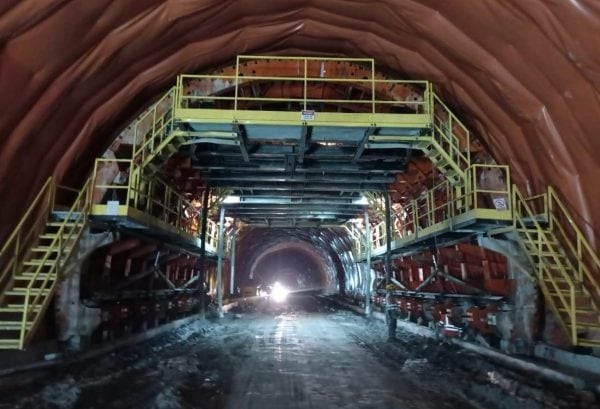 How does a complicated location put conditions on carrying out construction?

Once the excavation works are finished, the idea is that we can move between the two tunnel entryways, which will be 3,127 m apart when the tunnel is completed. It is currently a 24-km route that follows a path between the forest and the mountains. During the two years of work on the tunnel, construction and maintenance has been done to improve the sidewalk which has been used to transport workers and construction material. Before construction took place, that route was impractical on rainy days, and several points would become inaccessible because of the river’s overflowing waterways.

This difficulty around access required us to be highly organized to be as independent as possible and to guarantee that supplies and people could make it to the work areas. This led us to size camp facilities for accommodating workers who rotated in 14/7 shifts; workshops for performing machinery maintenance and repairs; concrete plants, and powder magazines at the tunnels’ mouths.

How are construction supplies managed?

A project as unique as a tunnel often requires very specific machinery, such as drilling jumbos and spray robots, as well as materials for specific uses, such as explosives and all the support materials like metal trusses and expansion bolts.

To have this equipment at our disposal, we had to import it from Europe. That involved the entire shipping process, crossing the Atlantic Ocean, and several customs procedures that sometimes took up to 5 months. But the most complicated part was undoubtedly managing spare parts and materials for the machinery, like trusses or bolts. The complicated thing about this process is that orders must be handled four months in advance, plus the uncertainty that tunneling projects entail: geology can vary, changing the support needed.

In addition, any failure in that supply schedule could lead to work halting due to the lack of materials not manufactured in Colombia. On top of all this is the added difficulty of handling explosives in an area that, until only a few years ago, has had issues relating to policital instability.

The social element has been one of the areas that’s required the most effort to manage. One of the project’s aims is to boost the local economy in the short-term. That’s why we’ve made an additional effort to ensure that the communities living in the area see us as an entity that can uphold the commitments that were promised by administrations for many years but never kept. It’s important to note that these communities have a close-knit bond. Through their leaders, they’ve coordinated plans for developing routes to stay connected, as well as for female employment and employment of the local population. However, this relationship has not always been easy, and it has sometimes brought up roadblocks requiring us to stop work.

One of the most conflictive moments with the communities occurred when activities resumed after the pandemic was declared. All construction was suspended in Colombia for just over a month by government order. In the end, dialogue and consensus with leaders led to activities being resumed with the bio-sanitary measures needed so that workers on-site would not spread infection in local communities.

This project could not have been carried out without a multidisciplinary team, where social and environmental factors were an essential source of support for the production team. We have to highlight the ideas and knowledge contributed by local engineers on the production team. They sometimes had no previous experience in construction, but they were eager to learn and participate in building infrastructure in their region. 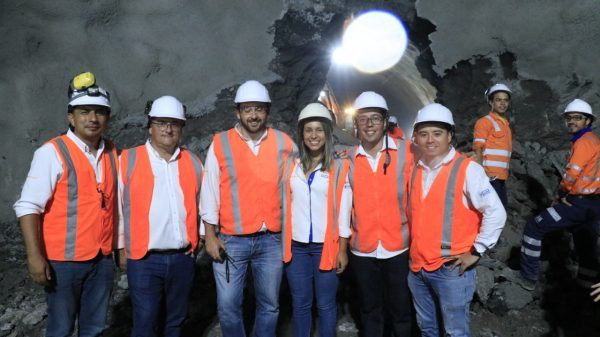