Biomimicry: Learning from Nature, Even in Construction 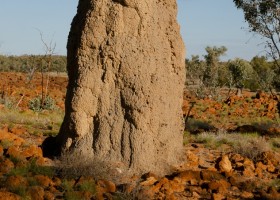 Human beings have always lived in close contact with nature, and we’ve used it as a model to develop our ingenuity to the best of our ability. We’ve all heard of the keenest observer in all of history: Leonardo da Vinci. He studied the anatomy and flight of birds in detail, made numerous notes and sketches of his observations, and later developed his well-known “flying machines.”

We can also find well-known examples in the field of engineering and construction. In the 19th century, with the rise of industrial development and the discovery of new materials, great engineers looked to nature for their work. Gustave Eiffel based the design of his tower on the structure of the human hip and femur, shifting the weight of the upper part to the sides and towards the ground, just like our own bodies do. Joseph Paxton was inspired by the structural patterns of a giant lily’s leaf to design his greenhouses and the great Crystal Palace. Antoni Gaudí never stopped studying the shapes of natural elements to optimize the effectiveness of his structures. In the 20th century, visionaries like Buckminster Fuller and Frei Otto continually thought about how to improve processes and structures by observing the solutions that nature had already invented.

Clearly, this interest isn’t new. However, the development of today’s technologies has given us the opportunity to take things one step further. We can now study the solutions that nature has provided to a wide variety of problems over almost 4 billion years of evolution with a precision and detail never before imagined.

The goals and challenges of biomimetics

Now more than ever, we have tools to analyze, understand, and above all, learn. Biomimetics refers to the learning process that seeks to apply solutions found in nature to many human problems. The term was coined by inventor, engineer, and biophysicist Otto Schmitt in 1950. It is also known as biomimicry (Janine M. Benyus, 1997).

Biomimicry encompasses studies of all kinds, and it is used in countless sectors. These include engineering, construction, and architecture. In these fields, it may get mixed up with other design trends like biophilic, biomorphic, organic, or natural architecture. These approaches to the natural world are inspired by the appearance and shape of certain elements, or they may strive for harmony between the human and natural habitat. In many cases, though, they are limited to a formal or conceptual abstraction of the elements observed.

Biomimicry, however, doesn’t aim to imitate an aesthetic; rather, it analyzes how a living being functions in order to apply that to structures, mechanisms, and even new technologies. Ultimately, the solutions strive to promote the circular economy and sustainability because nature clearly optimizes its resources, adapts to changing or extreme conditions in the most efficient way possible, and, on top of all that, doesn’t create waste.

Geckos, mussels, beetles, termites, spiders, butterflies, lotus leaves, tropical flowers, trees, prawns, sea sponges, and even coral have been the subject of numerous lines of study in recent years. More and more examples of new materials and structures have come to light from these investigations.

One of the animals that most fascinates all kinds of researchers is the humble spider. Its silk thread is up to four times stronger than a steel cable of the same thickness and five times more elastic. Cobwebs are optimized to distribute the forces they’re subjected to, trap their prey, and tolerate damage.

By drawing inspiration from spiders, a German company developed a process to produce raw, vegan, biodegradable silk material. This silk is already used in fields like medical technology, cosmetics, and the textile industry, and its application in other sectors like construction is being researched.

On another note, research on how birds can see spider webs in forests has led to the development of glass with an ultraviolet (UV) reflective coating. This is almost transparent to humans but clearly visible to birds, reducing the number of fatal impacts that occur each year.

The structural behavior of spider webs has also inspired the design of glass walls supported by cables, which favor natural lighting and allow ample visual exposure. The largest wall of this type in the world is located on the façade of The New Beijing Poly Plaza building.

Another good example is by a company founded by Nobel laureate Robert Grubbs: it created a paint that doesn’t require pigments or chemical dyes and helps drastically reduce cooling loads in hot climates. It is inspired by the wings of blue morpho butterflies. At first glance, they appear to be bright blue, but if you look closely, you can see that they are translucent. They get their color from blue light waves that are reflected off the wings’ nanostructure.

London’s Gherkin Tower, which was designed by Norman Foster, mimics the shape and respiratory system of sea sponges (Hexactinelida Euplectella Aspergillum) and sea anemones. It has a smart ventilation gear assembly that provides air efficiently and reduces energy consumption. According to the official figures, the building requires 50% less energy than other office towers of similar sizes.

Recently, a team of researchers at Harvard’s John A. Paulson School of Engineering and Applied Sciences (SEAS) was inspired by a different sponge, the Euplectella aspergillum. Their studies have shown that its skeletal structure, which takes the form of a diagonally reinforced square lattice, has greater resistance to buckling with a higher strength-to-weight ratio than the traditional lattice designs used for centuries in buildings and bridges.

The examples don’t end here. Another quite interesting one is Hamburg’s Bic House building. Some photosynthetic algae bioreactors set up on its façade make it possible to control light, as well as the generation and conservation of energy inside. Many other instances can be found on the Biomimicry Institute’s Ask Nature website.

There are also many studies and research initiatives. The Biomicry Institute, founded in 2006 by Janine Benyus, shares and promotes the science of biomimicry. It has interesting initiatives such as the Biomimicry Global Design Challenge and the Ray of Hope Prize®. The latter helps emerging companies in the sector become viable businesses.

Research groups like the Massachusetts Institute of Technology (MIT) and prominent architects and engineers such as Michael Pawlyn and Achim Menges also play a role. They study the infinite applications that biomimicry has in the field of architecture and construction in order to rethink all types of buildings and develop solutions that use resources much more efficiently.