Space Architecture: Challenges of Designing Blueprints for Other Planets

Green for the floor, blue and yellow for the walls, and brown for the ceiling. In the 1960s, Russian space architect Galina Balashova devised a color system to make areas in spaceships more pleasant and eliminate a common problem among astronauts: disorientation.

Throughout her career, Balashova designed and supervised the interiors of various spacecraft that left our planet and made history. Today, more than half a century later, architects continue to play a key role in the space race. The development of technology and science has made it possible to expand our focus beyond ships and stations: the first prototypes for buildings on other planets are already a reality.

Space architecture focuses on designing and building habitable spaces beyond Earth, whether these take the form of ships and space stations or structures on other planets and satellites. For architects, building in space means we can forget about the restrictions we face on Earth (in terms of urban planning, legality, or lack of space, for instance) and experiment with new techniques and materials.

Creating habitable spaces outside of our atmosphere also presents numerous challenges. We must adapt to new conditions for temperature, gravity, pressure, and radiation. At the same time, it is crucial for the structures to be able to minimize the problems that astronauts face, such as claustrophobia and disorientation. 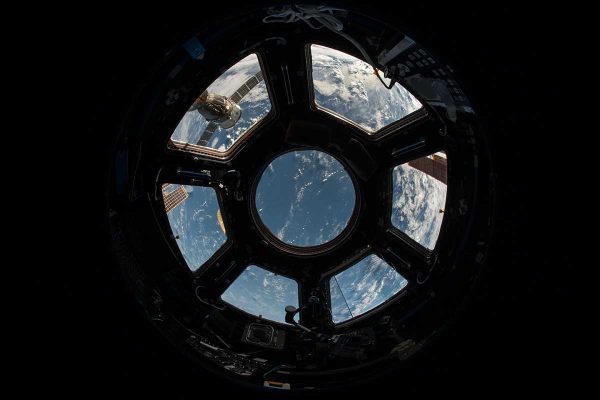 Their hermeticism helps isolate them from an exterior that’s incompatible with human life. By acting as a shelter, buildings can protect their inhabitants from radiation, lack of oxygen, and extreme temperatures. On the other hand, the fact that they are capsular makes it possible for them to make use of space and resist the forces that stem from pressure differences.

The fact that they are closed ecosystems is also important. “Space habitats have to reuse the resources available to them as much as possible since their environment doesn’t have the resources needed for the development of life. Here, the rule of the three Rs (reduce, reuse, and recycle) is taken to the extreme,” Gómez explains.

A house on Mars

When Ray Bradbury wrote The Martian Chronicles in the mid-twentieth century, he envisioned a red planet colonized by different generations of Earthlings and covered with all kinds of dwellings and cities. If this had come true, his red planet would even have hot dog stands by now.

While these science fiction stories are far from today’s reality, the truth is, we do already have the first prototypes of Martian houses and cities. One of them is Marsha, the project that won the tech company AI Space Factory a NASA contest. 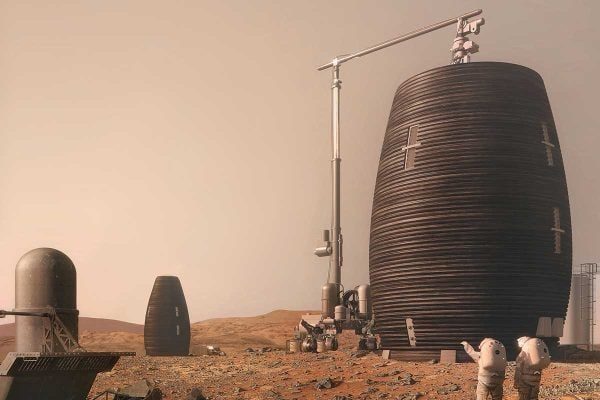 Marsha is a house with a highly resistant exterior that’s specifically designed to adapt to conditions on Mars. “In a strange environment 54.6 million kilometers away, building and materials must be rethought completely,” AI Space Factory explains. Marsha’s capsule-shaped structure was designed from a mixture of basalt fiber extracted from Martian rock and renewable bioplastic processed from plants that could be grown on Mars. This compound outperformed concrete in NASA’s tests on strength, durability, and crush resistance.

The interior is designed to encourage human relations. It has a large skylight that lets in natural light, four levels, and open spaces that invite residents to move around and stave off monotony. Its structure also supports circadian lighting to recreate terrestrial light and maximize the crew’s health. 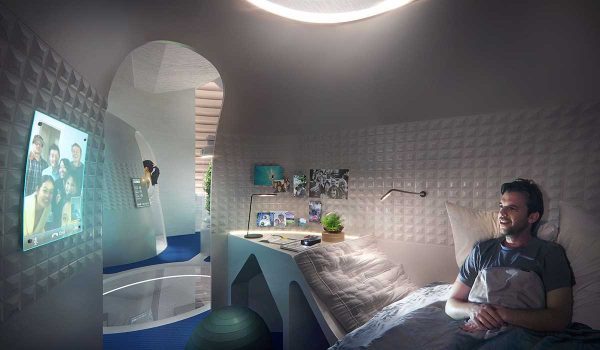 This is what Marsha’s interiors are like. AI Space Factory.

Life on the red planet

And what could day-to-day life be like on Mars? As meteorologist Mar Gómez explains in her book ‘How Raindrops Are Like Hamburger Buns,’ life would be complicated there, not only because enjoying sunlight like we do on Earth would be impossible, but also because the atmosphere is very different.

It is very fine, and its density is 1% of Earth’s. It is also primarily composed of carbon dioxide (CO2). There are intense dust storms, and temperatures can dip to be quite cold. While temperatures reach 20°C at the equator during the summer, the lows can reach -100°C with averages around -62°C.

Simulation of infrastructure to generate energy on the red planet. AI Space Factory.

However, these conditions may no longer stand in the way if the necessary technical means are available for creating the right infrastructure. At least, that’s how Danish architect Bjarke Ingels sees it. “We can create a large ecosystem using only elements available on Mars and technology, creativity, and know-how from Earth,” said the architect in his 2019 TED Talk.

According to Ingels, a combination of inflatable, underground, and 3D printed structures (made from materials available on the red planet, based on sand and stone) would guarantee everything needed for survival on Mars: protection against radiation, thermal insulation, pressurization, natural light, and functional, comfortable spaces. Currently, his architecture studio is involved in developing the Mars Science City in Dubai.

This project, which takes the form of a Martian city, aims to investigate what materials and techniques would be most suitable for building on the red planet. After all, this is one of the goals architecture has pursued since the beginning of history: understanding how buildings can better fit the needs of a certain environment and then making them a reality.