Lunch Atop a Skyscraper: What’s behind the iconic photo at Rockefeller Center?

A group of workers take out their lunches to enjoy a well-deserved break on a narrow beam hanging over New York City. The workers chat, compare their meals, light a cigarette, and have a drink. They seem indifferent to the fact that below them is only emptiness all the way to the ground, almost 250 meters below.

‘Lunch Atop a Skyscraper’ is one of the most iconic, recognizable photographs in history. At first glance, the image is dizzying. After a few seconds, the questions start to come: who are these workers? How did they end up working there? Was this staged, or were they really hanging above the buildings without any harnesses or protection?

While many of these questions remain unanswered, the truth is that the photo tells us of a very different time from our current reality. At a time when the Great Depression had left millions out of work, the skyscrapers rose as a sign of the recovery that was to come, and safety in construction was expendable. We’ll tell you the story behind this photograph.

The 69th Floor at Rockefeller Center

‘Lunch Atop a Skyscraper’ was taken along with other photographs on the 69th floor of the building that was inaugurated as the RCA. Today, it’s known as 30 Rockefeller Plaza, and it is part of the complex that the Rockefeller family built in the early 1930s during the Great Depression.

At the time, the construction of large buildings symbolized progress and confidence in America’s economic recovery. The Rockefeller family is estimated to have created more than 75,000 jobs at that time. This was, to a large extent, in the construction sector.

“Americans did not invent steel, but steel, in many ways, invented twentieth-century America,” notes Jim Rasenberger in his book ‘High Steel: The Daring Men Who Built the World’s Greatest Skyline, 1881 to the present.’ “Steel was everywhere. Most evidently, and most awesomely, it was in the cities, ascending hundreds of feet above the earth in the form of steel-frame skyscrapers.” 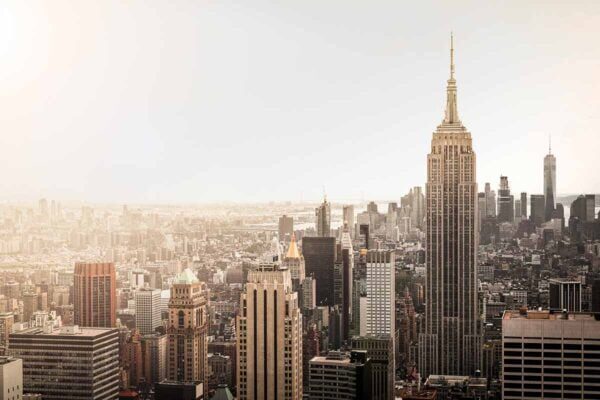 According to the author, the first skyscraper was built in Chicago in 1880. Once it opened, it unleashed a fever for buildings of this sort, which is most obvious in the city of New York. Its anonymous protagonists were the workers, construction workers (many of them immigrants and Mohawk Indians) whose names have not gone down in history. Nevertheless, it was they who risked their lives to erect the steel towers.

It’s not known exactly why this photograph was taken. It was very likely taken to record the work of these people and the risks they were subjected to on a daily basis. However, the theory that it was commissioned by the Rockefeller family to promote their project and their role in New York City has substance, as well.

It’s also possible that the image was staged, and there may have even been a lower floor finished just a few meters below the workers (and outside the camera angle). But the truth is, regardless of this detail, there are many other photographs and videos that show how construction was carried out hundreds of meters above ground without harnesses, protective equipment, or security measures.

The photograph was published on October 2, 1932 (nearly 90 years ago) in the New York Herald Tribune. Today, only one glass negative remains (a type of negative developed at the end of the 19th century that, unlike the daguerreotype, allowed several identical copies to be made, which popularized its use), and it belongs to the Corbis collection. The original negative is broken, so most of the copies we see today have been digitally retouched.

As was common at the time, the photograph wasn’t signed when it appeared in the newspaper’s pages. Over the following decades, its authorship was attributed to different photographers, including Lewis Hine and Charles Ebbets. However, to this day, we still don’t know for sure who took the picture (just as we don’t know the identity of most of the workers).

Almost a century later, we can only imagine that the photographer carried his glass plate camera to the 69th floor and perhaps had to overcome moments of vertigo before shooting it in front of the eleven workers dangling over apparent nothingness.