The globalization of hispanic engineering

There was October 12, 1492, and then there was the day after. The soldiers gave way to officials, tax collectors… and engineers. Their contribution has generally not been considered in books on history, science, technology, or business management. The epic of everyday life, however, has its basis in public works. Without roads, sewers, ports, lighthouses, arsenals, “turbulent waters and rings of stone,” globalization wouldn’t have gotten any traction.

In this article, we’ll look at a few stories from the book Un imperio de ingenieros. Una historia del imperio español a través de sus infraestructuras (An Empire of Engineers. A history of the Spanish empire seen through its infrastructures) (Taurus) written by Felipe Fernández-Armesto and by me, Manuel Lucena Giraldo. 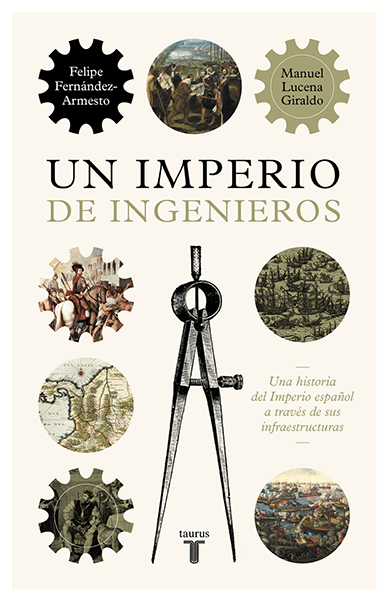 The origin of Spanish engineers

We’ll come across many interesting, unknown aspects. Religious figures’ contribution to public works is one of them. Brother Francisco de Tembleque, for instance, was the architect behind the Cempoala aqueduct, the largest of its kind that existed in the Mexican viceroyalty. In the 16th century, an engineer was someone who possessed ingenuity and was endowed with technical, military, and civilian skills and competencies. They were people who learned from experience. Only with Planet King Philip II, under the need to preserve the Hispanic global empire, did the profession begin to be institutionalized – one of the first in the world to do so. Infrastructure was the true scaffolding on which the Hispanic monarchy was built as it spread across four continents. It was the first of such size in the history of humanity, particularly in the pre-industrial era.

Infrastructure and public works brought with them a network of mutual comparative advantages. Carrying these projects out entailed not only a technical but a cultural feat. Without communication, translation, or shared languages in so many places, from the Atlantic to the Pacific and the Indian Ocean, they would not have been done. The Spanish empire was filled with them. There were so many that, if one had to assign them one management principle, it would be adaptability. Native human and technical knowledge from every continent, from Europe to America, Africa to Asia, was amalgamated in such a way that they expressed an emerging modernity, one that was old and new at the same time – mestizo, that mix of cultures. On first arriving to Peru, Spaniards were amazed by the flexibility and resistance of the bridges made with pita cord and vegetable fibers, stretching across chasms and cliffs in ways that were previously unimaginable to them. Indigenous people from the interior part of Mexico admired the technical consistency of the half-point arch and the construction of “Roman-style” vaults. The Spanish engineers’ incentives to “make the Americas” were definitely limited. The so-called “New World” was expensive and dangerous. They crossed the Atlantic in part to build careers. In part, to earn money and gain honor. In part, it was for adventure. There was a little of everything. Many went to do their duty, which they absolutely believed in. It was their destiny to serve the king and the Hispanic monarchy, especially during the eighteenth and nineteenth centuries, when the corps of civil engineers, road and mountain engineers, and others were organized in Cuba and the Philippines.

The influence of the Spanish Empire on engineering

Another element to highlight, given the Spanish empire’s vast sphere of influence and the time it lasted – four centuries, from 1492 to 1898 – was the Roman inspiration it drew from. Spanish engineers and technicians generally knew that they’d do well to imitate the Romans. They added some Christian providentialism, which explained their presence there. The monarch’s role coincided with that of a modern administrator or manager. Their ability to influence their subjects’ conduct and the course of events was very limited. Philip II, as powerful as he was, had one bankruptcy after another and spent his life asking for support, loans, and favors. After the start of the Bourbon dynasty, the eighteenth century was different. First, the ideas of public utility and happiness emerged. A good monarch had to promote public works that underscored his greatness and the prosperity of his reign through his ministers. The public works were excellent announcements of “a benevolent and generous government.” The other major change was the institutionalization of the corps of technicians, military engineers, naval officers, and their branches. Science and technology have since represented the direct action of the State in the region. It was an extraordinary change, creating a context of expectations about works as an expression of human action -a context we’re still immersed in.

In this work, which came to fruition thanks to the enthusiastic support and initiative of the Rafael del Pino Foundation, we looked at the operation of Hispanic domains from a complex investigation of what they represent. As a primordial expression of exchanges of human, technological, financial, and productive capital on a scale never before achieved.