Being the largest water purification plant to be designed and built in the world, the Northeast Water Purification Plant (NEWPP) Expansion Project in Houston, Texas is reinventing how large cities answer the increasing demand for water. The metropolitan area of Houston is one of the fastest growing areas in the United States, currently home to just over 4 million people. Thus, the demand for water is greater than ever. Traditionally, Houston has used groundwater to supply the city’s water, but not only is this source limited, it can cause irreversible damage to the area’s foundation. So, in an effort to move away from the reliance on groundwater, the NEWPP project will use surface water from Lake Houston to supply 5x more water to the Houston area than is currently done- increasing water supply from the current 60 million gallons of water per day to 320 million gallons. By using surface water, the expansion will have a greater capacity to support the city’s growing population without jeopardizing its foundation.

After breaking ground in 2019, the project is on track to complete its first of two milestones, producing at 25% capacity by February 2023 and completing the expansion entirely by 2025. The expansion has three main components- two new pipelines, an enhanced treatment facility and a new intake pump station at Lake Houston. In order to move water from Lake Houston to the treatment center, 35 miles of new pipeline is needed. The pipes themselves are quite impressive- measuring at 120 inches (or 10 feet) in diameter. Just to give you an idea of the size- you could comfortably drive a pick-up truck through one! In addition to the pipeline, the project also includes the expansion of the current treatment facility. The current facility only has the capacity to treat 60 million gallons, but after the expansion is complete its new capacity will be 380 million gallons! Lastly, the new intake pump station uses new technology and engineering to extract water at a deeper depth, alleviating past challenges with Lake Houston’s water quality.

PLW Waterworks’ scope of work among all the components of this project consists of the yard piping, including those impressive pipes mentioned above, and the construction of a high service pump station. Our team will install a massive pump 40 feet deep that will be pushing water more than 50 miles away from the plant. 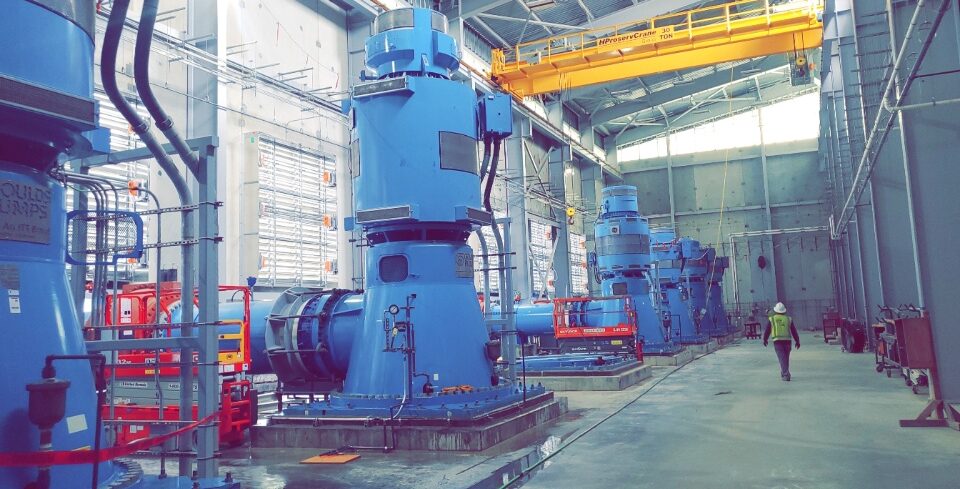 No News is Good News

The potential of the project is certainly exciting but being the first of its kind doesn’t come without its unique set of challenges. Given that the current plant serves the city of Houston, including George Bush Intercontinental Airport, the biggest challenge of the expansion for our team was connecting the old plant with the new plant without causing any interruptions or disturbances to the current water supply. Simply put, cutting off water to the city, especially the airport, was just not an option. To give you an idea of what we were up against, imagine replacing a garden hose without turning off the faucet. With this critical constraint, planning and practicing were essential even before breaking any ground. Therefore, the team spent two years planning every step of the process and, after many run-throughs, I’m proud to say that they were successful! The best news was that there was no news at all.

The NEWPP project is not only impressive from a technical standpoint but is leading in other ways as well. For instance, due to the complexity of the project, there are a lot of people needed to get the job done- 1500 in fact. But what complicates matters a bit is the relatively small worksite- this means there are a lot of people concentrated in a small area. Having so many people on site can not only make spaces crowded, it can be difficult to get everyone on the same page and, not to mention, dangerous. However, by creating open lines of communication and a strong culture of safety, we’ve been able to work together efficiently and effectively without anyone getting hurt or injured. I can honestly say it’s been an incredible experience to witness and be a part of.

Moreover, every company involved in the project is required by the city of Houston to allocate 12-18% of their budget towards minority-owned businesses from the Houston area. This requirement is a testament to the city’s dedication to elevating and promoting its small businesses, particularly those owned by minorities and women, and is a great example for how big cities can do the same.

It’s no secret that Texas, and Houston specifically, is growing rapidly. According to the U.S. Census Bureau, Houston was among the fastest growing metropolitan areas in the U.S. in 2021. With the population growing a such a high rate, investing in a sustainable water source was a top priority for the city. As a 1.7-billion-dollar investment, the NEWPP expansion will not only provide high quality water to the city of Houston, but to over 500 municipalities in the Houston area. With its new capacity, the Northeast Water Purification Plant will be able to support the city today and as it, undoubtably, continues to grow.