The thin blue layer that protects the Earth: do you know what state the ozone layer is in today?

Mars looks a lot like Earth. So much so that it could even harbor life. It’s a rocky planet of average size, neither too far nor too close to its star. However, it is an arid wasteland, worn out by solar radiation. Mars may look a lot like Earth, but there are also big differences: the Red Planet has no magnetic field and hardly any atmosphere, and it lacks the protective mantle that allows life to thrive on Earth – the ozone layer.

Without this thin, bluish layer, humans and all other living beings would be exposed to the harmful effects of the Sun’s rays. When the scientific community warned that this barrier was weakening in the second half of the last century, alarm bells went off. Closing the ozone hole became a top priority.

Now, 35 years after the signing of the Montreal Treaty, which set the objectives and measures to achieve it, the United States National Oceanic and Atmospheric Administration (NOAA) has some good news: the concentration of substances that destroy the ozone layer in the atmosphere continues to decrease.

Let’s start at the beginning: what is the ozone layer?

The ozone layer is a natural layer of gas that is concentrated in the stratosphere, some 10 to 40 kilometers above the Earth’s surface. It is calculated that 90% of all the planet’s ozone is in this layer of the atmosphere. It fulfills an essential task: filtering out most of the harmful radiation from the Sun.

The rays that reach us from the Sun include all kinds of radiation. There’s visible and infrared light, which gives us heat. There are also ultraviolet rays, whose wavelength is so short that they can damage cells and even genes. However, the ozone layer keeps most of this radiation from reaching the Earth’s surface. 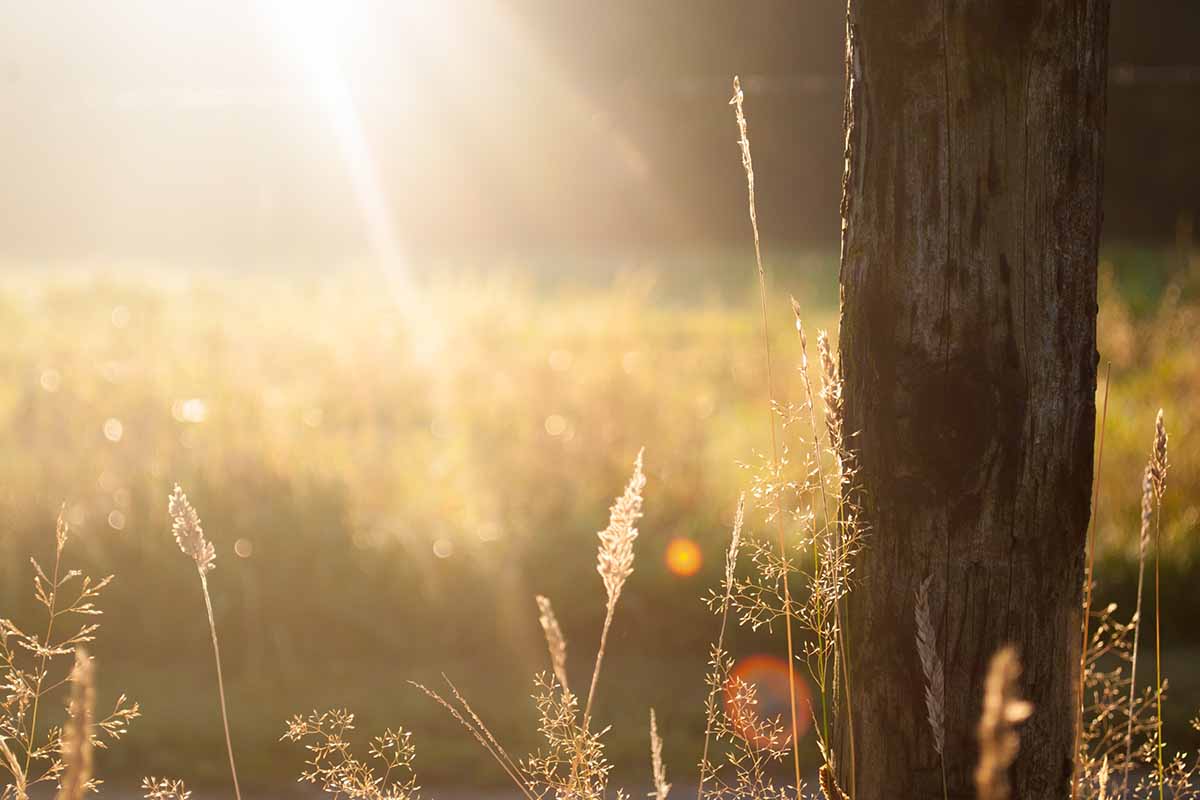 The ozone layer minimizes the effect of the Sun’s ultraviolet rays. Zwaddi (Unsplash)

As the European Commission explains, ozone concentrations in the atmosphere naturally vary depending on temperature, climate, latitude, and altitude. But they can also vary, depending on the presence of certain chemical substances that are man-made.

Some of these substances have negative effects and can even reduce the amount of ozone in the atmosphere. These are primarily chlorofluorocarbons (CFCs), which were very common substances a few decades ago and were used in aerosols and refrigerants, such as air conditioners.

When the impact that these chemicals could have on the future of the Earth was discovered – opening a hole in the ozone layer – a worldwide race began to curb their use and prevent them from continuing to reach the atmosphere.

Meteorites, spectrophotometers, and an international treaty

In the first half of the last century, British meteorologist and physicist G. M. B. Dobson was working on studying meteorites when he noticed that the temperature of the stratosphere wasn’t constant. He related it to the properties of ozone and built an apparatus – the spectrophotometer – to measure this stratospheric gas from the Earth’s surface.

Years later, several groups of scientists using one of their spectrophotometers realized that, for some reason, the amount of ozone was decreasing in some parts of the stratosphere. What was described as a big hole located especially over Antarctica was opening up, and that soon began to take over headlines. 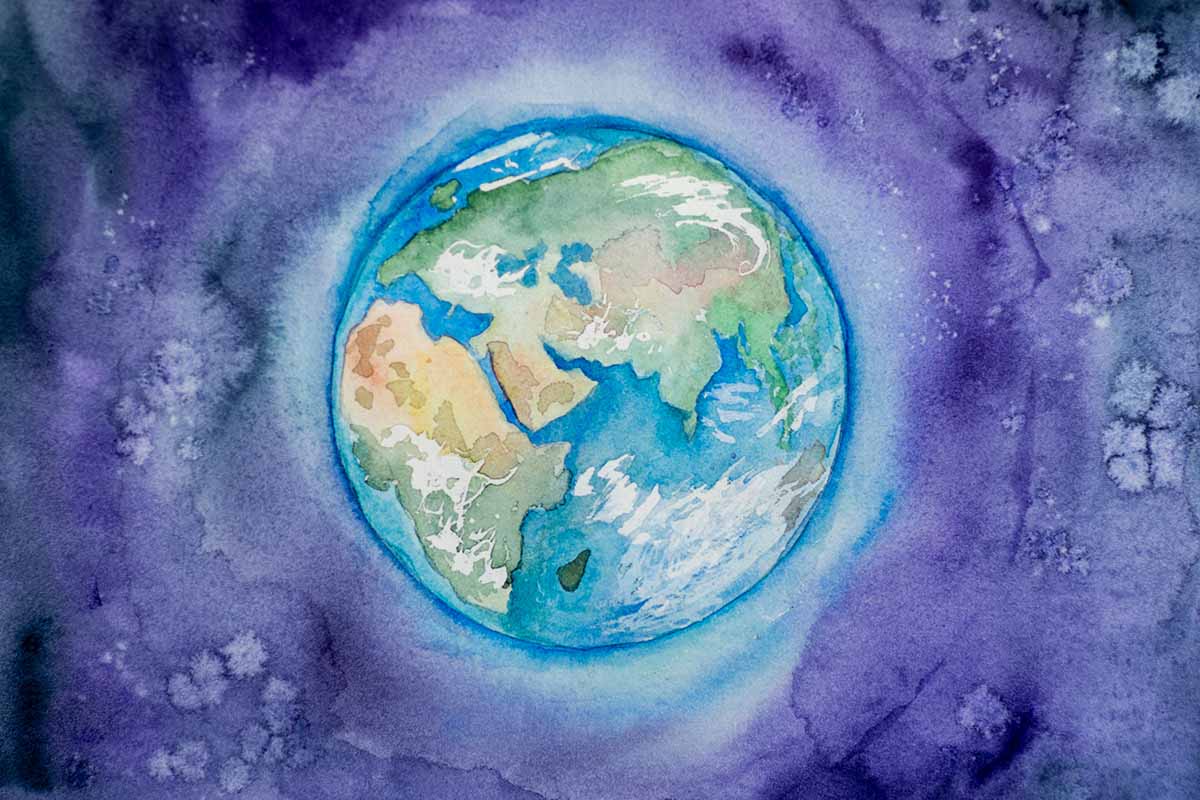 On September 16, 1987, just 35 years ago, the international community established the Montreal Protocol to face the destruction of the ozone layer. The goal was to progressively reduce the production, consumption, and emission of nearly one hundred chemical substances that deplete it (making chlorofluorocarbons a top priority). It was the first international treaty signed by every country in the world.

What state is the ozone layer in today?

It is estimated that the consumption of substances that damage the ozone layer has been reduced by 98% since countries began to adopt the measures set out in the Montreal Protocol. However, these substances (as with the greenhouse gases that cause climate change) remain in the atmosphere for years. Therefore, recovery of the ozone layer is slow.

In addition, it is important to note that the ozone hole changes size constantly depending on various factors, such as wind and air temperature. As the Spanish Meteorological Agency explains, the changes generated by global warming can also alter the distribution of ozone. 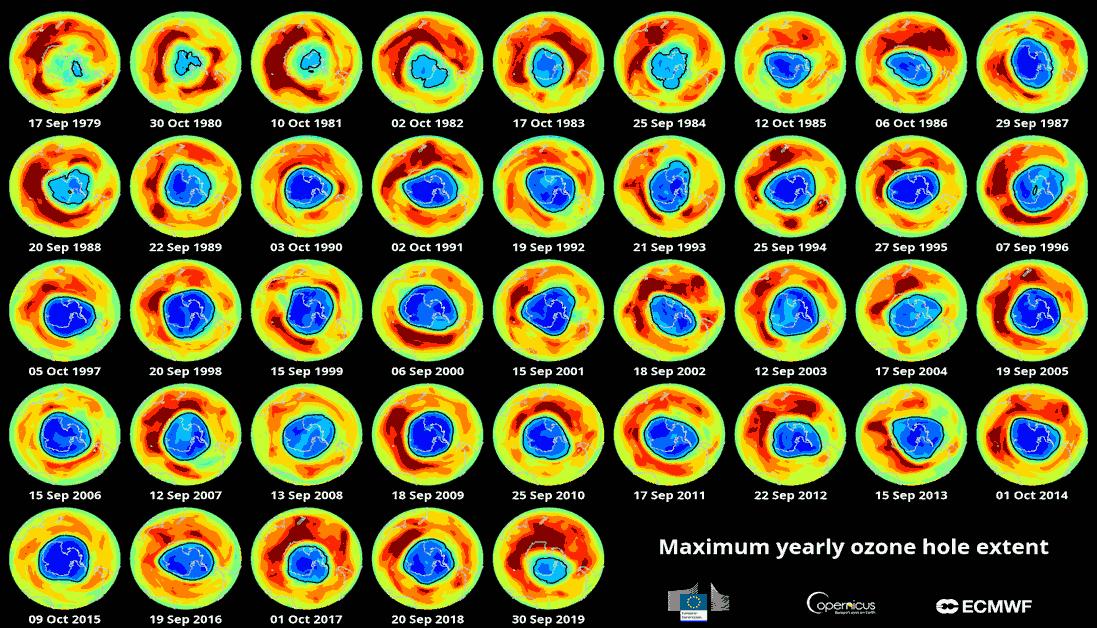 Maximum extent of the ozone hole in the southern hemisphere between 1979 and 2019. European Environment Agency.

A recent report by NOAA, an entity that has been monitoring the presence of harmful chemicals in the stratosphere for decades, allows us to see the optimistic progress that’s been made. The concentration of these substances continues to decrease, and we’re already halfway there in our attempt to return to 1980 levels. According to the US agency, the figures obtained allow us to predict that recovering the Antarctic ozone layer could occur around the year 2070.

The data’s publication has come a few weeks before the International Day for the Preservation of the Ozone Layer, which is celebrated every year on September 16.