Challenges of renovating the Duchess of Sueca Palace

Over the course of its history, the Duchess of Sueca Palace has had many lives. It was a school for the children of the servants of Charles III, the residence of Manuel Godoy and María Teresa de Borbón y Vallabriga, a school, one of the first Civil Guard barracks in Madrid, and housing.

Today, a renovation project aims to give this historic building a new life. The project is full of challenges, and it presents a unique opportunity to work on an interesting project, one that’s very different in terms of construction and full of difficulties that we overcome through teamwork.

A door to the past

The Duchess of Sueca Palace is located in the heart of Madrid in Plaza Duque de Alba. It was built at the end of the 18th century, and its name comes from the years during which it was the residence of María Teresa de Borbón and Vallabriga, the Duchess of Sueca and first wife of Manuel Godoy. Today, many know this building because its main entryway is the entrance to the Ministry of Time in the famous Spanish TV series of the same name.

When we started working on the building, three-quarters of it had already been renovated. Our job was to finish up the last part, which presented a serious case of instability at the structural level. Despite its historical importance, the building had been neglected for years, and we had to carry out major works to restore it to its former appearance and strength.

We found it necessary to demolish everything except for a small wooden structure that overlooked the central courtyard. The next step was to rebuild it, remaining as faithful as possible to the construction methods and techniques with which the original building had been erected. The National Heritage requirements and those specific to the project meant that we had to adapt to old methods of building. Therefore, we set out to look to the past and adapt our usual way of working.

The challenge of rebuilding an old building

The first step was to understand what the building’s structure was like and how it had been built. We had to analyze the palace, walk around in it, study it, and get to know it. This way, we could determine how the different structural elements were formed, as well as the details of the joints and transitions from one structural element to another: these were primarily very thick brick walls with a high bearing capacity that were made from wood, using girders and overhanging beams as transitional elements.

All this means that this structure differs greatly from modern ones, where there is a tendency to thin, fine, slender structural solutions. The Duchess of Sueca Palace has brick structures measuring two feet, even two and a half in some specific areas. In my 20 years of construction experience, the most load-bearing structures I’ve had to carry out have been 1 foot. We had to do some research in the department’s books to determine the right rig for it to act as a solid body.

The same was true of the wooden structures, which were simple but based on techniques that are no longer used. We had to keep up with a lot of details and find innovative solutions. For example, the height of the floors (up to six meters high) made it very difficult to follow traditional formwork systems.

Thanks to Miguel Ángel León’s work and collaboration, as he has significant experience in renovations and woodwork, we came up with a solution based on special formwork boards that we screwed on the bottom with hardware used to stabilize the wooden structure. We did several tests to check the system’s resistance, and we imitated the impact of a person’s weight. We also added strut lines to have a horizontal network under the system, thereby increasing safety. The result was a success, and we also saved processes, time, and resources. 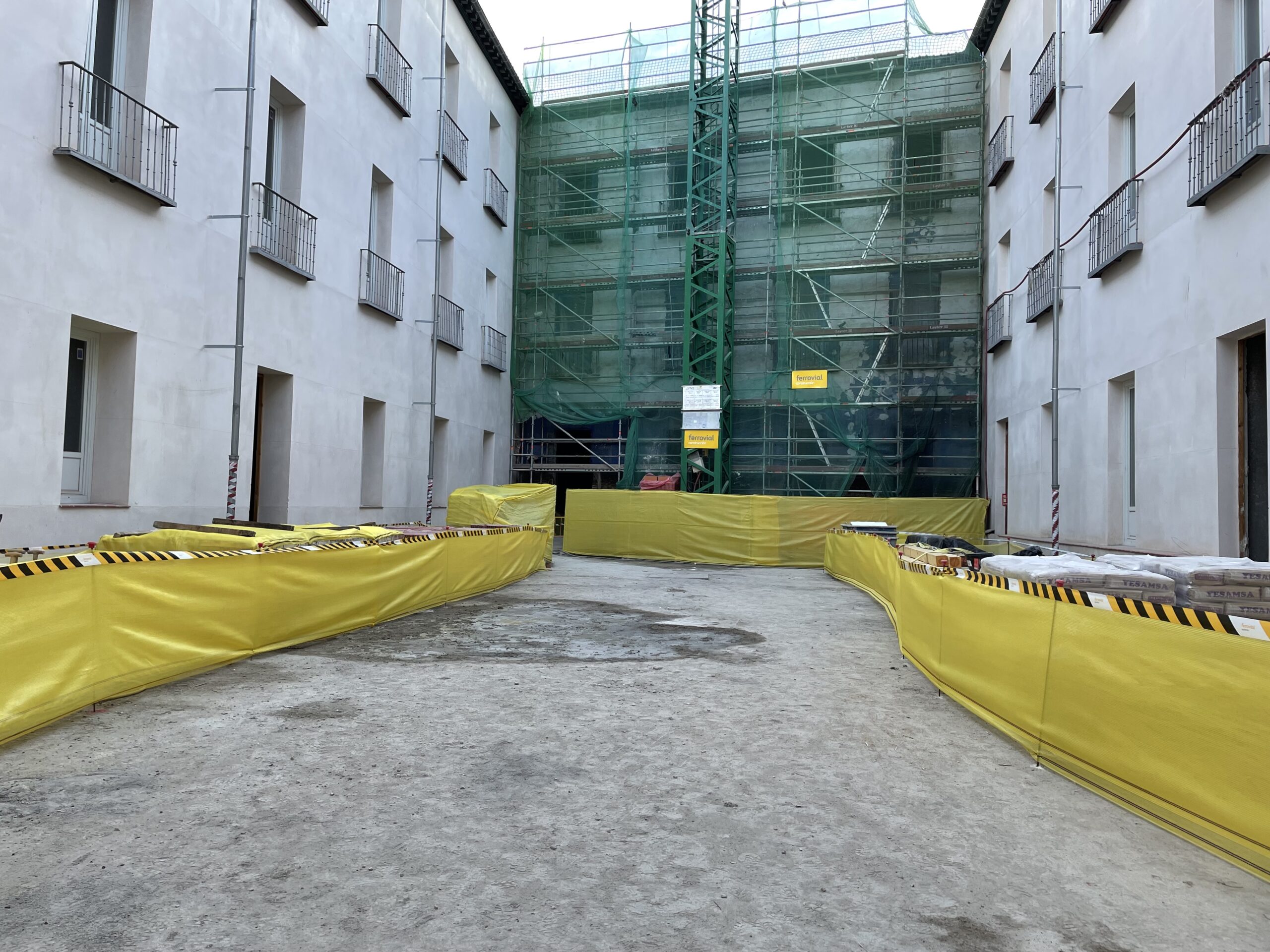 Challenges in the center of Madrid

The other major challenges of this project are related to logistics. The center of Madrid can only be accessed by medium and small vehicles and at certain times of day, which makes it difficult to bring in machinery and materials. In addition, the Duchess of Sueca’s Palace has its own limitations: the only street access is its main entryway. To get to the work site, we had to cross two courtyards, one of which is quite small.

We were limited to using two-axle trucks, which meant looking for companies that could supply materials in small vehicles. All this involved many organization and planning tasks, and it sometimes increased the cost of the project. The wood, for example, had to be sent to a logistics center, and from there, it was transported to the construction site in small trucks that only allowed us to transport 8 to 10 pallets at a time.

The same was true with the concrete mixers. The only ones that could get through the courtyards were ones that could hold six cubic meters. These machines are not very productive for concrete floors, and they’re uncommon. The alternative – which we had to resort to in some specific cases – was to pump concrete basically from the street into the construction site.

We also had to figure out how to get the crane inside the construction site. It was like playing Tetris: we thought about it and tried several solutions until we found a way to do it. Processes that are mere formalities for other projects were a challenge for us in this one.

A new life for the palace

Participating in this project has been a very inspiring adventure and, at the same time, quite a headache. It’s a far cry from the most typical construction projects, and it requires research, testing new solutions, and looking back and building as they did in the past.

This project has also necessitated the presence of archaeologists. I got to see how they worked and how the conclusions they drew helped imagine the other lives of the palace. The excavations led us to find an ancient bayonet, which they are currently restoring and studying.

Once the construction is finished, the Duchess of Sueca Palace will have a new life that’s quite different from the old ones. It is expected to house two social centers, one for families at risk of exclusion and another for the elderly.