Innovation in construction: the protection of bats when building motorways

Legend has it that during the siege of the city of Valencia in the period of the Spanish Reconquista, the movement of bats when Muslim troops were on the verge of launching a surprise attack on the camp of James I alerted the Christian troops and saved them from defeat. Shortly afterwards, the Christian troops marched triumphantly into the city. As a token of appreciation, James I the Conqueror included a bat in the city´s coat of arms.

Bats (Chiroptera), historically abundant in the territories of the old Kingdom of Aragon, bear very close links to the myths and symbols of the Levantine region, and are present in many of the coats of arms, shields and symbols of the area’s villages, associations and clubs, from the coat of arms of the city of Valencia, to the logo of Alcoy´s football club, the Alcoyano (though the club is more famous for its unflappable fighting spirit, as the saying in Spanish goes!).

These small mammals play a very important role in controlling pests and insect numbers, as well as in pollination, seed dispersal and soil fertilisation, and as such constitute an important natural capital for the region. It is part of innovation in construction, protecting bats during construction work for example when building motorways.

Unfortunately, bat numbers are falling to the point where certain species are almost extinct in the Valencian region, mainly through loss of habitat and mostly as a result of human activity. In some cases, bat habitats have become degraded due to the barrier effect of large linear works, such as roads.

[inlinetweet prefix=”” tweeter=”null” suffix=”null”]Awareness regarding animal and plant protection within the construction sector has grown enormously[/inlinetweet], and it is a factor which is taken into account when designing and building roads. Great care is taken to avoid fragmentation of wildlife habitats, with the provision of species-specific crossings or bridges enabling wild animals to cross roads safely.

But when the animals to be protected are birds and other flying species, such as bats, solutions are more difficult to find. Obviously, these animals can simply fly over the road to reach the other side. The problem arises when they fly low and are at risk of being run over. Up until now, practically no wildlife corridors were built for flying animals.

The Barranco de la Batalla stretch of the A-7 motorway in Alcoy (Alicante) includes an innovative wildlife corridor designed and built specifically for protecting the bat species living in the Juliana Cave lying just below the motorway, some of which are in danger of extinction. This cave is one of the main bat shelters in the province of Alicante, and is home to six species of bats, of which two are threatened and two are in danger of extinction. The Juliana Cave (or Cova Juliana as it is known in Valencian in the area) has been proposed as a Site of Community Importance (SCI) and has been included in the Natura 2000 network.

This unique wildlife corridor uses netting to protect a large stretch of the road and prevent bat intrusion, particularly protecting the routes that bats use when hunting at night.

A stretch of some 300 metres of road have been covered with protective netting held in place by a number of poles. A study was carried out to determine the mesh size to be used, which had to be sufficient for the bat’s particular radar system to detect an obstacle and so prevent the bats from going through the netting, but at the same time avoid birds getting caught in it if they tried to go through. The netting used is dark green in colour, and avoids the visual impact that other solutions would have caused to the landscape.

A study was also carried out to research the points at which the bats crossed the road, and their main hunting routes. These were then covered with false tunnels, on top of which were planted indigenous fragrant species to guide the bats when flying low over the motorway.

During construction works, several factors were taken into account to ensure that bat colonies in the Juliana Cave were not disturbed, and that the microclimate and integrity of the cave itself were not affected, in particular the breeding area. Noise levels, vibrations, temperature, humidity and airflow within the cave were carefully monitored. Working hours in the area were kept strictly to daylight hours, from dawn to dusk, in order not to disturb this nocturnal species.

Moreover, biologists and speleologists visited the cave every month to count the number of bats of each species. Over 1,850 individuals were found to live in the cave, most of which flew over the road being constructed every night. Counting was done at the mouth of the cave using infrared cameras and a video, with a subsequent headcount of bats flying in and out of the cave.

With respect to technical issues, traffic security barriers, hard shoulders, water ducts and signposting had to be adapted to the new bat crossings, and the design of the crossing itself had to be such that the netting would not fall onto the road surface in the event that a traffic accident were to damage the posts that hold it up. Access points for road cleaning and maintenance crews were also provided, in a way that ensured that the netting would not interfere with their work.

[inlinetweet prefix=”” tweeter=”” suffix=””]Infrastructure construction need not be at odds with environmental protection and biodiversity conservation:[/inlinetweet] creative thinking will lead the search for innovative solutions which are compatible with sustainable development. 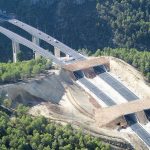 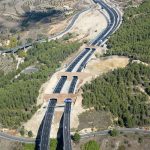 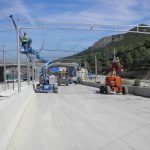