Digging up hundreds of kilometres of endless tunnels underground, at times only several metres away from the structures of buildings, is a complicated task. In order to carry out this work, giant tunnelling machines (also known as tunnel boring machines, or TBMs) are required. These are huge mechanical beasts which can weigh over 6,000 tonnes and span over 150 metres in length, together with all their ancillary machinery.

Preparing one of the tunnelling machines for its descent into the deep. Source: Ferrovial.

These tunnelling machines can bore underground in areas with sedimentary, metamorphic and volcanic rock, as well as areas of sand, gravel, clay or other material, wherever a tunnel must be constructed. Recently, even Elon Musk, renowned for his electric Tesla car or SpaceX rockets, is in the business, with The Boring Company, which is currently digging tunnels for his futuristic high-speed transport project, the Hyperloop.

In Spain, we have seen such machines at work in the tunnels of Guadarrama, Pajares, Butarque, Madrid’s M-30 ring road, or the Barcelona underground. In 2013, a machine called Bertha, with a massive 18 metre diameter, became the world’s largest boring machine and spent years excavating, not without difficulty, a long tunnel under Seattle (United States), which it finished in 2017.

Tunnelling machines also feature prominently in Crossrail: a massive high-speed railway construction spanning some 118 km, 21 km of which run under the streets of London. 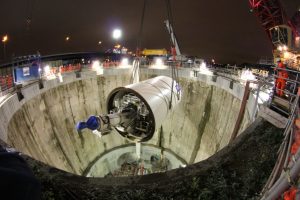 An impressive view of the tunnelling machines, which are over 140 metres long, almost a small factory on wheels working underground. Source: Crossrail.

A history with proper names

And, of course, the tunnelling world has its own traditions. The names of the machines are generally chosen through public consultation or are the decision of the project engineers or promotors. Bertha, for example, was the name of Seattle’s first woman mayor (Bertha Knight Landes) who occupied the post in 1926.  Beck or «Big Becky» (which held the title of largest tunnelling machine before Bertha came along) took its name from Sir Adam Beck, a Canadian politician who promoted the use of hydroelectricity, amongst other places in the Niagara Falls.

In Spain, the tunnelling machines which worked on Madrid’s M30 ring road – at the time also the largest in the world – were called Tizona and Dulcinea, after the sword of the Cid Campeador and the peasant women imagined by Don Quixote, respectively. Also inspired by novels is Godot, one of the machines used by The Boring Company.

In London, the names chosen are more thematic, and all of them feminine: historical figures, from queens to mathematicians, artists, athletes and even the wives of two civil engineers.

When works of this type are carried out underneath a city, it is indeed a delicate task. Tunnelling very often has to go under the foundations of buildings of great historical value, or particularly sensitive structures. It is not usually possible to change the location of a tunnel, so the foundations of potentially affected buildings are normally reinforced to avoid problems.

At some point, tunnelling machines may pass only some four metres below key locations, although in the case of Seattle and in order to avoid problems the decision was taken to go 61 metres deep, well below any foundations, ducts and pipelines. Even so, careful monitoring is regularly carried out, usually on hundreds of points, to ensure no problems arise.

Mainly for this reason, the speed at which tunnelling machines move forward depends at times, literally, on what’s above them. Although these machines can advance about 100 to 150 metres per week, they usually work at reduced speeds at critical moments. Despite digging somewhat “in the dark”, like moles, they are highly accurate and reach their destination with almost pinpoint accuracy.

One of the heads of the eight tunnelling machines used to build the ten 6.2-metre diameter tunnels comprising the Crossrail project. Source: Crossrail.

How a tunnelling machine goes about excavating

The actual excavation and construction works are carried out in several stages and depend partly on the type of ground being excavated. This gigantic machine digs out the ground and then uses the excavated material to provisionally hold up the front of the tunnel, while the rest of the material is extracted with an  Archimedean screw along the part of the tunnel which has already been excavated.

After moving forward a stretch, the machine stops for the ring making up the tunnel structure to be built, to keep the tunnel in place. Large panels or segments of reinforced concrete, manufactured previously in factories and carried to the site, are used for this. A hydraulic or mechanical lifting mechanism puts these segments in place, adjusting each piece with millimetre precision, as in a puzzle. This precision in the manufacture and placing of the panels allows for bends or curves to be planned in the tunnel design.

Tunnelling machines work 24 hours a day, stopping only for planned maintenance tasks. In the larger machines, teams of some twenty people work 12-hour shifts to make sure everything functions correctly.

Another of the striking features of this type of works is when the end moment arrives. The tunnelling machines are sometimes broken up into parts and taken to a foundry for recycling (engines, electronics and other parts are usually resold). But given their massive size and weight, it sometimes makes more sense to leave them where they are once excavation works are complete, rather than transport them elsewhere: it would simply not be worthwhile. In the case of the tunnelling machines used in London, they were dismantled next to one of the stations and the boring heads buried 30 metres underground and covered with concrete to be preserved for posterity – together with a time capsule with various significant objects of today’s world to be rediscovered by future generations.