In a distant, dystopic and apocalyptic future, gangs dominate the roads in Australia. Modified cars and motorbikes control a world where water is scarce. The only thing that matters is surviving in the midst of social chaos. Success implies controlling the asphalt. This is the scenario described in “Mad Max”, a science fiction classic showing that there is always a good story behind a road. But it is not the only example. Here are 11 other must-see science fiction films revolving around roads and asphalt.

The strange story line in ‘Mad Max’, a film with a relatively low budget which became a box office success and a cult film, gave rise to three sequels. The last of these, ‘Mad Max: Fury Road”, was played in 2015 in one of the pinnacles of the cinema world, the Cannes Film Festival. There, in the Grand Théâtre Lumière (currently hosting the 69th edition of the festival), George Miller´s film reminded the world of the important role played by roads in a good story. The Cannes Film Festival showed a good number, though not all, of the 11 films listed below.

If we hear the words science fiction and road together, there is a good chance that the first thing to come to mind will be Doc Brown’s DeLorean. With its fluzo condenser and an engine running initially on plutonium and later on recycled waste, the DeLorean travels the roads of Hill Valley, California, through time. This trilogy played by Michael J. Fox even takes us to a world without roads (though with iron tracks), where the DeLorean must be converted into a steam engine. 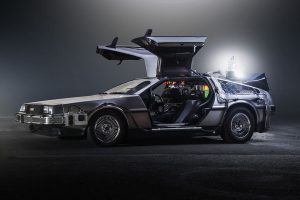 In this saga, which combines science fiction and a touch of comedy, Steven Spielberg plays with time travel while speculating on what future means of transport might be like and putting speed on four wheels to the test. This wealth of ingredients made it inevitable for the story to turn into the cult film it is today.

Granted, asphalt doesn’t play too big a role here, but “Donnie Darko” cannot be left out of any list of science fiction films. And, to be honest, it starts with Donnie lying in the middle of a road, although we have no clue as to how he got there. Moreover, other key moments of this film, which should not be missing from any library, take place on the road (but we won’t give a spoiler here for you). And it even has its very own E.T. moment, with the main characters crossing the village on a bike at full speed.

En route to Devil’s Tower national monument in Wyoming (USA), Roy Neary and Jillian complete a veritable road trip in one of the key moments of Close Encounters of the Third Kind. Travelling in a yellow Ford-F250, their trip ends up being a sort of pilgrimage to welcome aliens. The film won an Oscar and nominations in eight categories in 1977. Today, visiting Devil’s Tower is a must for tourists travelling through the United States north of Route 66. 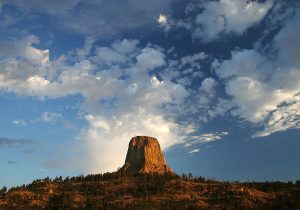 Ok, so there’s no asphalt, no petrol, no road traffic here. But the “Lord of the Rings” saga has more of the road trip spirit than many of the films in this genre. In fact, it is a continuous journey, lasting over 9 hours in cinema time. On the way to Mordor, the main route of the trilogy sees Sam and Frodo travelling all sorts of tracks to cross Middle Earth. But there is another, perhaps less obvious trip, in which two secondary characters climb onto an age-old off-road vehicle of sorts. Travelling on an Ent, Merry and Pippin complete a race against time to reach Isengard, one of the keys to the unfolding of the plot.

If we talk of science fiction, we have to talk about the future. And who knows what the future may bring for mobility and roads? “A Hitchhiker’s Guide to the Galaxy” was initially a comedy programme on the radio which in 1979 gave rise to the first of five books, all written by Douglas Adams. Inspired by a European road travel guide, the books led to a series, then a videogame, a comic, a play and a film which premiered in 2005.

Halfway between science and comedy, the film takes us to a future of multicultural aliens and space crafts. When planet Earth is destroyed, the main character, Arthur Dent, goes on a veritable road trip where he discovers the philosophy of travelling. The road, the meaning of life, robots and science come together in a story of cosmic proportions. 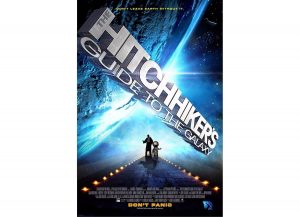 A story of supercomputers and machines which rise up against humans. It could be Matrix. But if we add to the mix a motorbike and lots of pursuits, the result is none other than “The Terminator”. Motorways, secondary roads and even the empty sewers of Los Angeles are the backdrop for one of the most profitable action and science fiction sagas in history. And, despite the undoubtable leading role played by motorbikes, the mythical phrase “I’ll be back” does not come before a motorcycle pursuit, but rather one with a truck.

And since we are in a rather destructive mode, let’s talk of a horror science fiction film which raised Quentin Tarantino to the height of the subgenre of exploitation fiction. The argument of “Death Proof” is simple. A retired stuntman starts chasing young girls down roads before killing them. Specialist Mike and his indestructible car are the main characters in what is considered Tarantino’s worst film to date. But, being Tarantino, this does not necessarily mean it is a bad film.

And now time for a horror movie. Although, given that this deals with a sentient car, we may perhaps not be very far removed from science fiction. “Christine” is a classic in the rebirth of B-films of the eighties. The plot of this John Carpenter film is simple. Christine is a vintage 1958 Plymouth Fury. While having its engine assembled, the car is possessed by the devil. The result: 110 minutes inspired by Stephen King himself, in which a sentient car chases adolescents. 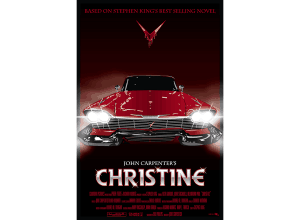 Back to science fiction and one of its favourite scenarios: a post-apocalyptic future. Based on a novel by Cormac McCarthy (who also wrote “Not Country for Old Men”), “The Road” is the story of a trip by a father and son looking for a safe place in which to settle. The roads and tracks, or at least what’s left of them, are a constant presence in this film played by Viggo Mortensen.

Even if you are in a virtual world, you still need a vehicle in which to move and a road on which to do so. This is the idea both in the original “Tron” from 1982 as in “Tron: Legacy”, which was released in 2010. Life within a videogame does not follow the same rules as life in the real world. Nevertheless, pursuits on board a futuristic motorcycle in the original film (light cycle) and a car in the remake (light runner) work quite well in this classic science fiction film. By the way, in the virtual world, all roads are straight, and you can only do 90º turns. 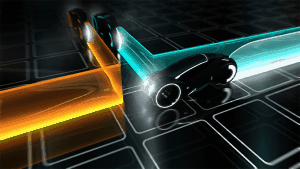 When it was released in 2008, the fans spoke: this film by the Wachowski sisters was not of the same quality as the original Japanese TV series, which premiered at the end of the sixties (and was known in the Spanish-speaking world as “Meteorite”). Nevertheless, it deserves a place in this list because the whole of the plot revolves around asphalt, racing circuits and speed. Winning the futuristic competition Casa Cristo 5000 becomes the only aim of the main character. The rest is speed, action, fiction and a little bit of science.

Beyond science fiction and the many types of films we have dealt with in this list, road movies are a genre in their own right. From “The Devil on Wheels”, the first production by a then unknown Steven Spielberg, to mythical movies such as “Thelma and Louise” or “Easy Rider”, the importance of roads in the film industry is undoubtable. After all, a good story needs a good track along which to unfold.