El Salado: The importance of drinking water infrastructure in the recovery of a community

El Salado is a beautiful region in the north of Colombia that is green, lush, and populated by peaceful village folk. On the 16th of February, 2000, four fronts of the United Self-Defense Forces of Colombia entered the small municipality. After the death of more than 66 people, the remainder fleeing to nearby villages to avoid the massacre.

A few years after the event, several people from the village, including Don Lucho, would become leaders of the return to and recovery of the village. The exodus was reversed, and the Salaeros, as the inhabitants of El Salado are known, began returning to a village that lacked even the most basic services, and where the houses were hidden beneath vegetation. The question remained, “How to live in a place without a water supply?”

This is the tale told in the Jiménez brothers’ graphic novel adventure entitled El Salado, a comic book that relates how paradise is devoured by “the gruesome Zaperoco” (a local entity that symbolises horror) and how water and infrastructure play a vital role in the rebuilding of a community.

From our privileged position it is hard to imagine what living in a ghost town must be like. The tropical rainforest climate of the area means that the abandoned houses had been, at least in part, consumed by vegetation, and the villagers who led the return, had to hack their way into the village with machetes.

More difficult, however, is to visualise a community without access to drinking water. We walk into the kitchen and turn on the tap, and out pours clean water, something that is impossible, even inconceivable, in many parts of the world. Through a process of abandonment, El Salado had become one of those parts.

The village had possessed an aqueduct system, which had been abandoned as a result of the armed conflict and was unable to provide water. By the time Don Lucho and the first people to repopulate the village returned, they could not supply a constant stream of quality water. Three times a week the villagers cranked up a series of electric pumps, at exorbitant expense, in order to extract water from the subsoil and store it in large tanks from which they distributed the water to the houses. 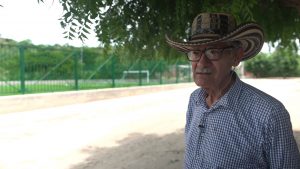 The upshot of this intermittent service was that the houses of El Salado would add a novel element to their basic construction in the form of small cisterns and plastic tanks for collecting the occasional trickle of well water – water storage conditions that could hardly be described as ideal.

The water collected in these little tanks was neither refrigerated nor protected from bacteria. At 9º North, El Salado is a tropical paradise, but one in which the climate now posed a threat to the health of the locals. Bacteria such as E.coli, for example, grow fastest at this kind of temperature (between 35 and 40ºC), so it soon became clear that the Salaeros needed quality water.

The importance of NGOs in providing local assistance

Some years had passed and the population of El Salado had begun to recover. Don Lucho and other leaders had reunited local families and news of the return spread through the region by word of mouth, and while everyone was very excited, the insalubrious water storage conditions posed a very real threat.

In 2009 the Semana Foundation raised the alarm: El Salado needs water. Supplying fresh water to a village is never an easy task, and more so if the number of families is growing every week.

El Salado already had a water pump and an aqueduct that was in a state of disrepair, and though both were in poor condition, the re-adaptation of the existing system required technical knowledge for its repair, and this is where Ferrovial’s volunteer employees came into the picture.

Every year, as part of the company’s International “Social Infrastructure” program, Ferrovial offers NGOs the opportunity to submit proposals for social projects. The Semana Foundation, together with Ayuda en Acción, proposed offering assistance to this Colombian municipality. 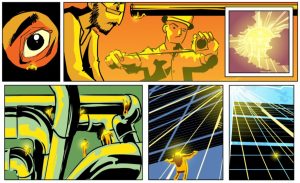 A group of company staff accompanied the NGOs to the municipality and analysed the different possibilities to achieve the ultimate goal: to bring a continuous flow of drinking water to the people. After several studies and careful consideration on the part of the three organizations, the project of repairing of the aqueduct began, betting on solar pumping as the key element.

Meeting the locals, an essential part of the project

Immersing oneself in the local culture and learning about local problems is essential. When Ferrovial participates in this type of project it is not enough to adopt a paternalistic attitude and simply show up, build the infrastructure, and leave. It’s necessary to think about the long term and analyse what is best for the community. We need to meet the people and find out what they are capable of.

While the community has both primary and secondary schools, the people of the El Salado region have little technical training, the second most popular occupation for young people being that of ferrying other locals to and from neighbouring communities on motor scooters known as mototaxis.

These, however, are the people who will eventually be in charge of the new facilities, and they require both training and skills in addition to an infrastructure that can be accessed in order to carry out repairs.

For example, there is little point in providing state-of-the-art ground ater harvesting equipment if spare parts are not available in the area or if nobody in the community understands the basic mechanism. In order that it could be maintained in the future, the proposed engineering project had to be in line with the available technical skills and financial resources.

Our concept of cooperation is based on self-government, so the primary objective was to bring water to the community in such a way that the infrastructure could be self-administered in the coming years.

When we first arrived in the area the aqueduct was in very poor condition, the storage tanks were deteriorated, the service was intermittent and the water was not fit for drinking. As a result of this, the installation of a photovoltaic pumping system was proposed, as well as the installation of a chlorination system to purify the water and replace the storage tanks. 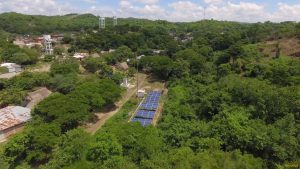 The region around the equator is rich in sunlight, and solar panel installations are easy to maintain. In addition, they solve the problem of exorbitant charges as the system operates independently of the power grid, so operating costs are greatly reduced.

The tank where the water was stored was replaced, as were many of the pipes used to supply water to the homes. A project of these dimensions, which provides services for more than 1200 people, took more than two years to complete and required the help of local workers. But the job doesn’t end there.

Teaching people how to use and administer their water supply is an essential part of improving local health and hygiene. Many El Salado locals maintained their personal water tanks “just in case” and it was necessary to raise social awareness and provide training in the treatment of drinking water and hygiene in order for the Saladeros to begin to trust the new infrastructure.

Handing over “the file” and finalising the project

Ferrovial participated in the design of the proposal alongside the NGO partners, helped install the supply network and configure the solar panels that drive the whole system. The budget contributed by Ferrovial and the time given by the company’s voluntary employees has changed the lives of the people of El Salado.

Part of this change concerns what we at Ferrovial call, “the file”, in reference to the completed folder of information and relevant data that signifies completion of the project.

The most significant information contained in the file includes plans of the facility, guarantees of each component, instruction manuals, tutorials that include frequently asked questions regarding repairs, lists of local suppliers and a detailed breakdown of the entire infrastructure.

We mentioned earlier that our objective was self-government. Well, the next step was for the local Infrastructures Committee to take responsibility for the administration of their water supply. They now record the amount of water consumed by each home and oversee billing, the monthly charges, and take care of the operation and maintenance of the infrastructure. This income goes towards future extensions and repairs of the facility, thereby avoiding the need for further external aid.