Where does our money go when we fly?

Before getting into the aviation sector, I had always thought that travelling by plane was likely to be a very lucrative business, particularly for airlines; however, it is true that there is a whole value chain of different stakeholders involved when you decide to fly such as the transportation that leads you to the airport, the airport staff that allows you to get into the plane and the ancillary services that you receive from the airline itself, before and after the flight. So, let’s see in more detail who takes the money from our pockets when we fly…

Think for instance that you plan to go to FIFA’s final football World cup this year with some friends. The final match will be in Moscow the 15th July, so let’s organize the budget for the one-way trip.

Despite the match happening in high season this summer, the good news is that flight tickets to Moscow are still at reasonable levels. Looking at any travel agency through the internet, there are tickets available for the day before the match at prices around 200€ per person. Let’s assume that you decide to buy a ticket 200€ plus a surcharge of 2.2€ as a concept of booking fees for a particular internet website.

Following with this planning exercise, early in the morning of the day of the flight, you will likely take the tube to get to Barajas, as it is rush hour and taking a taxi is too risky because of the traffic jam. That will be 1.5€ plus the airport tariff surcharge of 3€.

When you arrive at the airport, you would go straight ahead to security (imagine that you have done the check-in online at home the day before). Then I’d rather have a small breakfast in any of the cafeterias of the terminal airside; although the airport shops are expensive to me (one coffee and a sandwich can amount around 9€), you cannot skip the breakfast before a long day for traveling and fun, you deserve it!  Before getting into the plane you would likely buy a newspaper to be updated with the latest breaking news from the championship: 1.5 more euros out of your pocket.

Once in the plane, you will relax and have some rest as it is a 4 ½ h flight, probably you will have a snack, not sure if they have those great menus with drink and food by let’s say 5€. Finally, when you arrive in Moscow Domodédovo airport, you would rather take the train shuttle that is called AeroExpress, as the airport is quite far from the downtown and I heard it is the more efficient mode of transport to get to the downtown; this rail link will cost another 7.6€ for a one-way trip.

So, at the end of the day, you would probably have spent 230€, including the flight ticket and all the out-of-the-pocket expenses. Now that we have finished with the cost breakdown, the interesting exercise is to analyze who is picking up this money:

Out of the 200€ of the flight ticket, it is easy to calculate that the airport operators (in this case Aena and Domodédovo airport) directly capture 23.3€ in concept of airport taxes and fees, whilst the air navigation services providers directly capture another 23.7€; although we, as passengers, do not usually see the amount of these airport fees in the tickets, they are quite substantial when looking at the overall spent of the trip.

Besides, these airport fees are quite easy to obtain on a per passenger basis, just by using the public information available in the airports’ websites and simplified assumptions on aircraft type and aircraft load factors. The table below shows the first outlook of the money split out of your pocket as “airline” versus “non airline” expenses.

One first conclusion is that the airline gets around 2/3 of the total expense for this trip, and this helps to understand the value creation for all the industry players that are set around aviation. In this simple example, we see 1/3 of the value is driven to the related industries that allow airlines to fly and accommodate their aircraft and passengers. However, this proportion could be even more unbalanced in detriment of the airlines because of many reasons: regulators or airports imposing expensive charges, airports being located far from the city downtowns, lack of public transport to get to the airport, etc.

A second look at these figures could also show other interesting findings. On the non-airline side, for instance, the airport operator also benefits from any sales on the shops located within the terminals; therefore, probably another euro from your tasty breakfast and funny newspaper will end up in the financials of the airport operators if assuming a typical market fee of 12%.

On the airline side, however, the net 147.4€ amount will be intended to cover the airlines’ costs and provide some operational profit. Many people do not know that there are three main components that absorb most of the airlines’ costs: staff (mainly crew members’ costs), fuel and ground handling services. Assuming that the airline should be getting at least a 4% of net margin (which is the average of the airline sector in Europe, according to IATA 2018 data), that ground handling costs could be around 1,000€ per aircraft turnaround according to Aena’s tariffs, and crew and fuel expenses for the airline could be estimated at20% and 25% of the airline costs, i.e. 38€ and 48€ of my ticket, respectively. By the way, almost half of the fuel cost is paid to the Government in a concept of direct taxes, i.e. the Government would pick up around 27€.

This allows us to arrive at the chart below, as a high-level proxy of the uses of the total 230€ that you might spend in the one-single trip to the FIFA world Cup final: 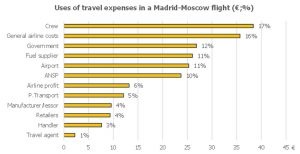 As a general conclusion, it can be shocking that the airline only extracts a few values from your pocket as pure profit when you decide to take a flight, but reality is that the aviation value chain is a complex ecosystem where every participant has a role and you do pay for it.