‘Pontis’ is a Latin word, which is hardly surprising, given that the Romans were such excellent bridge builders; at least that is the reputation they earned. The Ponte dei Quattro Capi has been standing since the modern era was just 62 years old, and, at 1135 metres long, Trajan’s bridge over the Danube held the record for the world’s longest bridge for more than a millennium. The Romans, however, were not the first, and obviously not the last, to see their roadways take to the air.

In fact, the Latin pontis derives from the Proto-Indo-European word for pass, passageway, or path. The Kazarma, or Arkadiko Bridge, in Greece, is one of the first works of this type on record. At 4 metres high and 22 metres long, it constituted a milestone in construction, 1300 years B.C. Some five hundred years later the Caravan Bridge was built in what is Turkey today, and continues to support the passage of heavy vehicles that wouldn’t even be invented for another 3000 years! 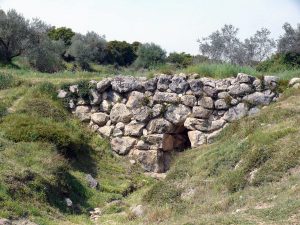 Examples of human ingenuity, paradigms of engineering, and sources of inspiration for cinema and literature… bridges, like tunnels, came into being as a means of overcoming obstacles that geography had placed in the way of humankind and our insatiable need to keep moving. Over the centuries they have become one of the trademarks of civilisation.

The bridge over the River Guadalquivir in Cordoba was built by the Romans in the first years of the modern era. More than 330 metres long, it is probably best known today for its role as the Long Bridge in Volantis in the 5th season of Game of Thrones rather than for its antiquity. On countless occasions, film and literature have drawn on the symbolic, grandiose nature of bridges and, in exchange, have transformed these into illustrious infrastructures.

The list of films containing scenes shot on the Rialto Bridge in Venice is endless, as is the list featuring the Brooklyn Bridge in New York or the Golden Gate Bridge in San Francisco. Even some viaducts have had their day on the big screen, for example the Madison Street Bridge or the Bridge over the River Kwai. Many others, however, have passed into the annals of history without the need for Hollywood pampering, but rather on the basis of their own merits, simply because they are magnificent works of engineering.

“Few engineering works are more beautiful to behold than a perfectly arched, precise, exacting, orderly bridge spanning two mountainsides. The balance and power it transmits influences how we see nature’s engineering works.” This is how civil engineer Javier Manterola remembers his work in Ferrovial as seen by José Manuel Ballester.

These words by Manterola are inspired by Tilo’s Arch on the island of La Palma, in the Canary Islands. At 353 metres long, the viaduct consists of a concrete deck with a 255-metre span over a 150 metre ravine without the need for interim supports.  While it is far from record-breaking, Tilo’s Arch is one of Spain’s most symbolic bridges, alongside ‘La Pepa’ in Cadiz, the Rande Bridge in Vigo, or the landmark Montabliz Viaduct in Cantabria, located on the section of the A67 motorway built by Ferrovial Agroman. This infrastructure connects Cantabria with the adjacent tableland, spanning a geological fault. Resting on piers as long as 130 metres, it is the highest bridge ever constructed in Spain. The Montabliz Viaduct is 721 metres long and spans the Bisueña River gorge at its deepest point. The bridge deck is curved, with a 700 metre radius, and the longitudinal profile is inclined. 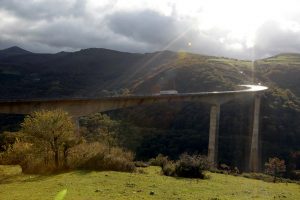 At 12.3 kilometres long and spanning the Tagus estuary in Lisbon, the Vasco da Gama Bridge is both one of the longest bridges in Europe and a veritable symbol of Portugal, rivalling the shorter, but far older, suspended steel structure of the 25th of April Bridge that spans the same river. Other bridge construction landmarks in Europe include the Millau Viaduct, in France, one of the highest, or the Øresund tunnel-bridge between Sweden and Denmark, which combines railway and motorway. European bridges, however, are a far cry from making the record books, with Asia, in particular China, and the USA topping the charts.

Crossing Lake Pontchartrain, in Louisiana, is one of those roads that simply must be included in any road trip worthy of the name through the southern United States. At more than 38 kilometres long, the two parallel bridges known as the Lake Pontchartrain Causeway were, for many years, the longest in the world to span a body of water. Curiously enough there is a 12-kilometre-long stretch in the middle from which one cannot see land on either side.

According to the Guinness World Records organisation, the Danyang-Kunshan Grand Bridge is the current title holder of the longest in the world. Spanning 164.8 kilometres over the Yangtze River Delta, the bridge forms part of the Beijing-Shanghai High Speed Railway Line. The world’s highest viaduct is also found in China, this time in the Guizhou province, the deck of the Duge Bridge standing at 565 metres above the Beipan River. It is also the first cable-stayed bridge to boast the title.

While they may not exactly float among the clouds, other record-breaking bridges do exist. Lake Washington, in Seattle, USA, is more than 60 metres deep. Faced with the difficulty of setting piers into the lake bed, the state transport authorities decided to traverse the lake using a floating bridge. The Evergreen Point Floating Bridge, inaugurated in 2016, floats on the lake for a distance of 2349.55 metres and is the longest of its type in the world.

Returning to Asia, this time to Japan, the Akashi Kaikyō Grand Bridge crosses one of the busiest straits in the world, with more than 1000 sea-going vessels of all kinds bearing witness every day to one of the icons of Japanese engineering – nearly 4 kilometres of bridge with a 1991-metre central span supported by just two main cables. These cables consist of 37,000 steel wires which, if laid end to end, would circle the globe seven and a half times. The origin of the world’s longest suspension bridge lies in the destructive power of natural forces.

In 1955, two ferries foundered while crossing the strait (violent storms are common in the area), resulting in the death of 168 people. On the basis of the tragedy the decision was taken to build the bridge, though work would not begin for another 30 years. In its original design the bridge measured 3910 metres in length. However, when construction was already well underway, in 1995 the Great Hanshin earthquake separated the bridge’s two towers by almost a metre. The project was adapted on site and the viaduct now measures 3911 metres long. 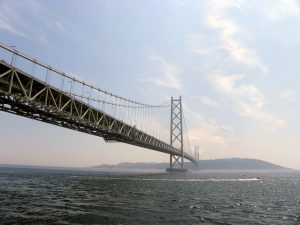 From the Caravan Bridge to the Brooklyn Bridge, from the Volantis Bridge to Tilo’s Arch, from Bronze Age Greece to modern-day Louisiana, humankind has been building bridges for more than 3000 years. Structures that once seemed impossible made reality through science and engineering. The dream of building higher, longer, more difficult bridges has even infiltrated the world of virtual reality.

In Minecraft, a construction-based video game, players compete in an effort to, among many other goals, build the longest bridge in the universe. The current record is held by ReAdRaId, an English Youtuber who has connected 30,000 virtual blocks to construct a viaduct just over 30 kilometres long. With 450,000 tonnes of steel and 2.3 million square metres of concrete, the 164.8 kilometres of the Danyang-Kunshan Grand Bridge sets a record that would appear to be safe, for now.