Everybody has heard of SimCity, a game in which players erect buildings, infrastructures and cities in great detail in order to see how they evolve over time. Or traffic simulators, where players have to build road networks and oversee the provision of the corresponding traffic signals, or maybe air traffic control (ATC) simulators, some of which are incredibly realistic.  Well now there are even a couple of simulation games that relate to the world of airports; games that have been undergoing development for some time and offer players a better understanding the complex nature of airports and airport operation and business management.

The level of specialisation in this type of entertainment is extremely high and games offer an increasingly greater degree of detail, both in terms of the underlying financial aspects of the enterprise and in the behaviour of the characters. One of these is Airport CEO (the early access version can be downloaded from Steam), the other is SimAirport (ditto). The studios that developed these games are already allowing players to purchase them in advance and have even implemented changes and additions based on comments provided by the first fans and enthusiasts. Furthermore, these are games that will work on almost any PC, without the need for any inordinate performance specifications. 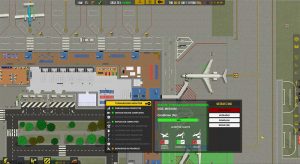 The two games are relatively similar, and both are based on the idea that the player is the person responsible for the design, construction and operation of all aspects of the airport as well as the financing, human resources and daily management required for the same. While this may appear a little daunting at first, this is not really the case, as many functions are, to some degree, delegated, and more so as the game progresses.

The simulations include important aspects relating to the design and construction of the airport, and the player is required to select a location, pave the runways and design the buildings. Inside the terminals there must be arrival and departure areas, baggage systems, security controls and waiting rooms in addition to restaurants, shops and even toilets, not to mention all the corresponding signage.

The game also has its financial element, in that the player is given an initial budget that he or she has to administer, with amounts earmarked for construction, for the contracting of services, for the hiring of staff, etc. As time progresses the airport generates income, which is used to balance the books. And when the airport begins to show a profit, this may be reinvested in extensions to different areas.

Just like the real world, the objective of the game is to keep the customer satisfied, in this case the customer being both the passengers and the airlines. As far as the passengers are concerned, this means making sure flights depart and arrive on time, that baggage doesn’t get lost and that waiting times are kept to a minimum. For the airlines the most important issues are punctuality and the availability of fingers and boarding gates. The list of available extras includes the possibility of income from shops and restaurants, and the list of unforeseen circumstances includes variations in weather conditions, security issues and delays and emergencies on some flights.

Realism down to the finest detail 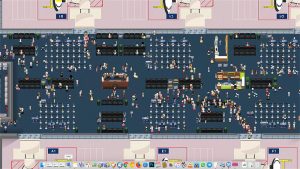 It is said that the best simulation games are those in which the little details make all the difference. In the case of the aforementioned simulators these details come in the form of the many problems relating to airport logistics and management that may escape the general public but which must be understood if the player is to succeed in the game. One example of this is that airport management has to sign contracts with the airlines – these may request a range of services relating to timetables, fingers, boarding gate personnel, etc. – and prices may vary according to congestion, compliance ratios and so forth. Airline companies can vary from large corporations to small operators, and strategic decisions that must be taken include selecting the most suitable contracts, depending on the type of airport, and designing buildings with the most profitable airlines in mind.

The simulated characters in these virtual airports include both passengers and ground staff, all of whom possess behavioural patterns that are intended to simulate real life examples. In other words passengers complain when they can’t find a certain shop, or if the queues are too long, or if the luggage takes too long to appear. There are first- and tourist-class passengers, and ideally there should be separate queues, and maybe even a VIP lounge. Airport employees appear in a number of roles, including ramp operators, ground staff and cleaning, retail and security personnel, among others. As part of the simulation, these people must interact with the passengers, and the game designers have endowed them with variable levels of sympathy, stress and trustworthiness, aspects that usually depend on the time of day or the intensity of their work load. Airport CEO even requires that you contract a human resources team and an accounting team once the business reaches a certain degree of complexity. 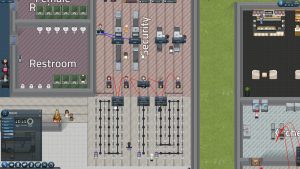 The design of the airport infrastructure entails more than just runways and terminals, though these are often the only elements the player sees. Ideally the design will also include auxiliary taxiways, control towers and service corridors. Then there are many vehicles to consider, apart from the airplanes, such as passenger transport, luggage and catering trucks, fire-fighting and emergency service vehicles, etc., all of which must have their own parking and refuelling areas. Inside the buildings it is important to differentiate areas by using partitions, ensure everything is properly signposted (or passengers will get lost) and that passengers cannot enter or exit without passing through security or customs control. The number of control points must also gauged so that circulation of passengers is fluid, without interminable queues.

As with other simulation games, there are two play modes: Competitive, where the player begins with a specific budget, and Fun, where the player has unlimited funds and it is far easier to experiment. In addition to the game itself, there are also «community forums» where players exchange experiences, recommendations and tricks. As is often the case with this type of software, its uses extend beyond mere entertainment, one of the principal virtues of the game being that it offers an introduction to business concepts, training using easy-to-understand visual examples, and the opportunity to experiment with new ideas. The saying «the best way to learn is by playing» never rang more true.